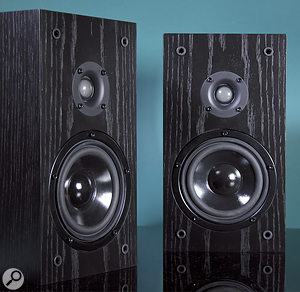 EB Acoustics is probably not a name that many in the music-technology world will be familiar with. Until now, they have been mostly involved with the world of passive hi-fi loudspeakers, all designed by the owner, Richard Allen, and built in-house in a small industrial unit in Kidderminster in the UK Midlands.

Allen has an electronics background, and started out as an apprentice TV engineer, aged 17. Since then, he has turned his hand to stints as a studio engineer, a live sound engineer and an installation engineer, before setting up his own furniture business. In 1994, Allen started working with the likes of Celestion on cabinet design and prototype construction, and has developed that interest further over the last 20 years, by designing his own loudspeakers — he estimates about 60 different designs to date!

EB Acoustics is a trading name of Arcaydis Limited, which Allen formed in 1997 with a business partner, and both companies market a range of (mostly) compact, passive, hi-fi loudspeakers. These hi-fi speakers have always been sold directly from the factory, rather than through the normal retail chain, but that hasn't always worked as well as it should have. Indeed, a quick web search on EB Acoustics reveals numerous grumbling posts over slow delivery! Apparently, the delivery problems were because the EB range is made entirely in-house, including the cabinets, and the production line often couldn't keep up with demand. Thankfully, all the reports on the sound quality of Allen's EB speakers are full of praise, which is reassuring!

The new ER1 model reviewed here shouldn't suffer from delivery delays because the cabinets are made elsewhere, and only the final assembly and testing is done at the factory. More importantly, the ER1 model will be distributed as a retail-only product through mainstream dealers in the UK, with online factory-direct sales employed only for overseas purchasers. Allen estimates producing 70 to 80 pairs of ER1s per month, with 25 to 30 retail outlets nationwide.

The ER1 is a low-cost, passive, two-way loudspeaker housed in a reflex-loaded cabinet measuring 170 x 310 x 264mm (WxHxD). The cabinet itself is 250mm deep, but the front grille is mounted on pillars that increase the overall depth by 14mm. The review model was finished with a gloss-black oak veneer, but a natural oak veneer is also available. The cabinet is constructed from MDF and lined with bitumen damping pads and acoustic-grade foam to control panel and internal resonances, respectively. Two small circular ports are located on the rear panel, along with a single pair of gold-plated 4mm binding posts for connecting the speaker cable from an external power amp.

The bass-mid driver is a 125mm paper-cone design, accompanied by a 25mm soft-dome tweeter, with a simple first-order crossover tuned to about 3kHz. The usable frequency range is given as 55Hz to 20kHz.

I used a pair of Bryston PP120 monoblock power amps, rated at 120W into an 8Ω load each. Each speaker was connected with short, one-metre lengths of 10A twin-core mains cables — I'm not a devotee of 'tweaky' speaker cables, and stick to well-engineered power amps and sensibly thick cables in short lengths.

Listening sources comprised mostly ripped commercial CDs via a Sonos media server through a Grace Audio M902 monitor controller, but I also worked on a variety of my own project material to assess the ER1's suitability as a mixing monitor.

It's impossible to escape the fact that the ER1 is a very compact speaker, and clearly that imposes an inherent restriction on both the low bass extension and bass power handling. These speakers are never going to flap your trouser-leg bottoms on low pipe-organ notes, although the bass response is actually surprisingly good for a cabinet of this size, and very well balanced relative to the rest of the audio spectum.

The mid-range has a mild but noticeable forwardness, and that lends a sense of detail and clarity through the vocal region, which helps to make it well suited for audio mixing duties. However, this forwardness or presence does not become fatiguing or annoying, and so the ER1 serves as a good hi-fi speaker for enjoying music, as well as a monitor tool for analysing it.

The speaker is extremely dynamic and crisp, with a fast transient response — drum attacks are very well defined, for example. However, I found that the high end could also sound slightly hard and metallic at times, and this was most noticeable on well-recorded solo piano works. This would be unacceptable in a high-end studio monitor, but I feel it churlish to make too much of it in a monitor at this price point, especially given all of its other valid strengths.

Without doubt, the most impressive aspect of the ER1 is its stereo imaging. Speakers with small and narrow cabinet baffles always image very well, and the ER1 is up there with the best of them. It produces extremely solid and stable phantom images, with wide and deep sound stages on appropriate material.

Although the studio monitor market is dominated by more fashionable active products these days, passive monitors can still pass muster when partnered with decent power amps, and often provide a lower-cost route. The ER1 has very little competition at its £399 retail price and is recommended as a low-cost monitor when partnered with a modest amplifier.

The ER1's UK price places it amongst many budget active monitors, including Avantone's active Mixcubes, the Adam A3X and F5, Fostex's PM1 MkII and PM0.5 MkII, the Yamaha HS7 and HS5, and Dynaudio's DBM50.

This is a relatively low-cost, passive, nearfield monitor that excels in stereo imaging and has a fine overall tonality, with good bass extension for its size.