There's no shortage of compact live consoles around, but few have as many features and routing options as this new range from Dynacord. 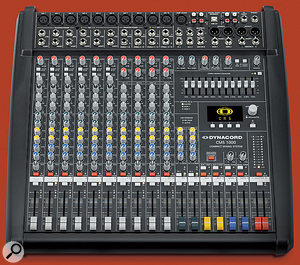 The latest series of consoles in Dynacord's CMS (Compact Mixing System) family is the CMS3 range, which consists of three models offering 10, 16 and 22 channels with on-board digital effects, and now also featuring a four-input/four-output USB digital audio interface. For this review, I was able to spend some time with the smallest member of the line-up, the CMS 1000-3.

These mixers are aimed at an already well-supplied market sector, and products of a similar basic format are available from several manufacturers. The CMS3 mixers are marketed strongly on the quality of their audio path and processing, and their flexible feature set. Apart from the number of mono mic channels, the three models are identically equipped in terms of number of buses, effects processors and I/O connectivity.

Straight from the box, I liked the general appearance and main board ergonomics of the CMS 1000-3. For such a compact desk, the controls are well spaced and all the board labelling is clear and logical. My first impression — even before plugging it in — was that the CMS 1000-3 was going to be an easy board to work with.

The CMS 1000-3 has six fully featured mono channels, which are laid out in traditional fashion, with the XLR input connectors on the top panel. A separate balanced line input and insert jack (which can be used to provide a direct, pre-EQ output) are to be found next to the XLR socket, along with the input-level control and an 80Hz low-cut filter switch. The first novel feature of the CMS 1000-3 appears at this stage, in the form of a preset EQ switch labelled Voice Filter. This applies a gentle boost below 300Hz and above 2kHz, with a slight cut (a smooth asymmetric curve to a maximum depth of around 2dB) in between, and can be used in addition to the other EQ controls. It's quite a gentle effect, overall, and I quite liked it for speech, where I found it added a touch of extra warmth and clarity — nothing dramatic, but it's there if you want it.

The EQ section has standard three-band functionality, with shelving controls for LF and HF, and a swept mid-band section covering the range from 100Hz to 8kHz. All three bands operate smoothly and, for me, in exactly the right places. There's a good degree of control available, and the rotary pots feel 'low geared', in that there are no sudden changes throughout the range of adjustment. The amount of overlap between the three EQ regions also feels just right.

The remaining four channels are for stereo sources, and have a pair of balanced TRS inputs per channel, hence the total channel count of 10. The channel count of the CMS 1000-3 isn't quite the same as the total number of available inputs to mix, however, as each stereo channel also has a separate mic preamp (with phantom power available), which can be used as a mono channel if needed — a really useful feature, especially when you also realise that these mic inputs each have a dedicated input-level control and can be used at the same time as the stereo line inputs, thus providing an additional four inputs and taking the number of analogue sources to mix up to 14. True, these extra inputs share all of channel 7-14's facilities, such as EQ and aux routing, but it's nevertheless a potential get-out-of-jail-free card.

It's also worth mentioning that stereo channels 7/8 and 9/10 are also used to control the inputs from the unbalanced phono inputs, for connecting CD players and the like, and channels 11/12 and 13/14 control the audio received via the USB port, although these are 'either/or' configurations, so you can't use analogue and USB signals at the same time. The four stereo channels have the same features as the mono strips, except that the mid-band EQ is fixed at 2.4kHz, and the pan pot acts as a balance control.

At the bottom of each channel strip are the usual pan, mute and PFL controls, and a 60mm fader made by ALPS. Deploying any mute switch lights up a fairly bright red LED, and the channel feed to all main and auxiliary outputs is interrupted, although the input metering (single signal LED per channel) and headphone monitoring are not affected.

A sign of quality in a small-format mixer is the feel of the channel faders, and I'm happy to report that the CMS 1000-3's faders are all nice and smooth, whether mono or stereo, and free from any annoying tendencies to snag or jam when pushed from directly above.

The channel send options are comprehensive and flexible, especially for a small-format mixer such as this. There are six auxiliary buses, arranged into three groups of two. The first two auxes are intended to be effects sends, and are labelled as such and, consequently, wired post-fader. Their default state is to feed into the twin internal effects processors, hence the need for two independent sends, but they can also be used to feed external processors (or anything else) via two balanced output jacks. The next pair of aux sends can be operated in either pre-fader or post-fader mode, but this is a global choice that is made within the master section, and not on a per-channel basis.

The third pair of auxes are the monitor 1 and 2 sends, and are hard-wired as pre-fader sends intended primarily for stage monitors. So we have a total of six independent aux buses which present a useful choice of output options.

There are aux masters for each of the six aux outputs. Aux 1/2 and Monitor 1/2 are within the fader bank, whereas the effects sends have rotary controls. The main left and right outputs, and the monitor 1 and 2 outputs, have both XLR and TRS connectors, but the aux outputs have only TRS sockets. which would represent a mild inconvenience for anyone wishing to run more than two stage foldback mixes, as they'd need different cables or adaptors, and it would have been ideal to have all these outputs on XLRs.

In addition to the main output, there's a subsidiary output called 'Master B', which would be useful for feeding a foyer/backstage relay, or for providing an extra monitor or recording output. It carries the same mix as the main master output, but can be independently switched pre or post the main master faders, can be switched to mono or stereo and, of course, has its own level control.

One handy feature I very much like is the inclusion of a standby switch, which mutes all the main, monitor and aux bus outputs but still allows a path for the two-track and USB playback signals, amounting to an 'interval mode', with all the live performance feeds safely muted, but allowing background music to continue.

The CMS 1000-3 benefits from a few nice touches and little extras: the Mon 1 and Mon 2 master sections each include a feedback notch filter, for example. This takes the form of a simple rotary control that sets the frequency at which a sharp 9dB notch filter can be applied to the monitor outputs, and is used to tune out a single rogue feedback frequency. It's a manual process, but is extremely easy to carry out. All you do is set the monitor level to the point where ringing is just threatening to begin, then switch in the filter and sweep the control until the problem disappears.

The master section contains a neat little 11-band graphic equaliser, and a useful amount of control is available even though the faders have a relatively short travel. The assignment of the graphic can be changed from within the settings menu. The default setting has it on the main left/right outputs, but it can, instead, be applied to one or both of the monitor sends, which is probably where I'd tend to make more use of it in a compact live setup. The graphic section works predictably and the 11 bands are well-defined in operation, with a very usable degree of control available from the small sliders.

The CMS 1000-3 has two other sections that must be mentioned, namely the on-board effects engines and the digital interface. Built-in effects are nothing new on small analogue mixers, but the CMS 1000-3 has, as you might expect, more features than some, in the form of not one but two editable and MIDI-controllable processors. Interestingly, these effects engines are identical but are used together, so the user has lots of control over how the presets and user-configured effects can be applied to the audio material. I tried and liked the reverbs and delays, particularly the choice of contrasting warm and bright hall and plate options. I didn't get as far as editing any parameters, because I found a suitable preset that fulfilled the requirement every time, but it's good to know that fine tuning is available if called for. The effects can be fed into the aux and monitor mixes via a bank of eight dedicated controls, which is an excellent and easy-to-use feature and would, for example, make it a simple matter to satisfy the most demanding of divas who apparently can't perform unless the monitor mix is awash with 'enormous underwater cathedral' or whatever it takes... On the CMS 1000-3, you can just dial it in.

The CMS 1000-3 has a USB port which can handle four channels of audio in either direction (yes, all at the same time, but to use all four channels you need to connect using USB 2 standard speed) for playback or recording purposes. The bus routing to the USB output is accessed from the screen menu and is very easy to set up — basically you choose between 'live' and 'studio' settings, which route either the main mix or the monitor 1 & 2 buses, respectively, to USB channels 1 and 2. The Aux 1 & 2 outputs always feed to USB channels 3 and 4.

The USB inputs appear on desk channels 11/12 and 13/14, and the connected PC or Mac sees the CMS 1000-3 as an external interface. Drivers are supplied with the mixer on a CD, which also includes Cubase LE. The desk even has MIDI input and output ports on the rear panel, which would give you the ability to connect a MIDI keyboard to the desk for playing soft synths on a computer, with the resulting audio being fed directly back to channels 11/12 or 13/14. You can also use MIDI to control the various effects parameters.

The physical construction of the 1000-3 looks sturdy enough — the moulded side panels (which can be replaced with full-length rack ears) accommodate generous and comfortable lifting handles, and there's also a full-width recess below the front edge, which makes lifting and carrying the unit a single-handed task.

The controls, although not secured to the top panel, do feel quite secure, and an optional clip-on lid is available to offer protection against both transport knocks and unauthorised tampering. There's no cooling fan, so operation is quiet, and I left the CMS 1000-3 running for over five hours in a small room without the back panel becoming any more than warm.

Overall, the CMS 1000-3 is a compact little desk endowed with plenty of flexibility and pleasing extra features, while maintaining a clean and very controllable audio path. It's a particularly easy desk to use, and the 'extras' don't get in the way of its basic operation. The controls are clearly labelled and I found all the functions intuitive and obvious, including the impressively clear, bright display screen and parameter-access controls — it's even obvious how you step back through or exit the menu, because they've provided buttons labelled 'back' and 'exit'. I reckon even my lifting crew or the folk who run our village fete could work this desk!

Some obvious contenders are the Soundcraft GB2 series, Yamaha's MGP range and

This is a well-made, feature-packed console that's easy to use and offers quality audio performance.