Dynacord apply their typically thoughtful design to a compact desk, which could be just the ticket for small gigs and installations.

Usually, whenever a Dynacord product turns up for review I have to ask for help to lift it out of the box, but not in this case. The PM502 is a small and lightweight powered mixer designed to meet both installation and mobile musician requirements but, typically of Dynacord, it has a number of novel features, not least a hybrid analogue/digital architecture and the ability to feed 100V line systems for installation use.

The main housing is moulded from plastic, and the front panel is angled back slightly for optimum visibility when used on a desktop. Overall it measures 395 x 244 x 241 mm and weighs just 4.9kg. All the connections, other than the headphone jack (irritatingly a consumer 3.5mm type) and a memory-stick USB socket, are on the rear panel, which sits above the ‘power bulge’ holding the electronics. Optional extras include a footswitch to bypass the internal effects and a rackmounting kit. 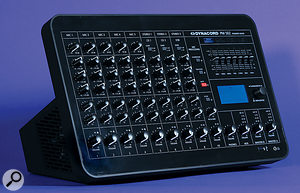 As far as the mixer is concerned, the front end is analogue with conventional and familiar knobs and functions. However, the master section is digital, and hosts a flexible effects section, before feeding a fan-cooled, dual-channel Class-D power amplifier capable of delivering 450W (continuous sine wave) per channel into a 4Ω load. The amp can be fed from any of the three outputs (of which more later), providing the option to use the internal amps to feed passive stage monitors and one of the other outputs to feed a main ‘amped’ speaker system, or vice versa.

Dyn Be The Glory

There are five mic/line channels with ‘combi’ XLR/jack inputs, each kitted out with a compressor/limiter and talk-over function, the latter ducking the line inputs to give the mic channels priority. Four depths of ducking may be selected via the DSP menu. Note that, unlike some mixers, the compressor settings (again accessed via the DSP menu) affect all the mic/line channels when active. Phantom power is also switchable globally. The maximum microphone gain with all controls maxed out is 65dB, and a mic amp EIN of -129dB (A-weighted) is specified.

Three further line channels, each fed from a pair of quarter-inch jacks, are available, and there are also two sets of RCA phono connectors labelled CD1 and CD2, plus a USB port on the front panel that allows the direct playback of stereo MP3 or WAV audio files from a USB stick. These three inputs share the existing stereo line-in channels. Overload warning LEDs are present on all channels, while the line inputs also have dual-sensitivity gain switches. A further USB port on the rear of the unit allows for recording of the stereo output to a computer.

Conventional rotary controls are provided on all channels for input gain, the three-band EQ, effect send, aux send and volume, but everything else is controlled from the master section’s Parameter ‘turn and press’ control knob and its LCD window. Above this are four small panels providing further status information when illuminated. Unusually there are no pan controls — all the mic/line channels are centred, and the stereo inputs panned hard left and right.

The EQ section comprises high- and low-shelving filters at 12kHz and 60Hz, respectively, and a fixed mid ‘bell’ filter operating at 2.4kHz. The shelving filters have a ±15dB range and the mid a ±12dB range. In the master section the graphic EQ frequencies are set at 63Hz, 160Hz, 400Hz, 1kHz, 2.5kHz, 6kHz and 12kHz, each with a ±10dB range. The graphic EQs can be set to a mode called Sliders Link in the menu, whereby the on-screen faders follow the position of the physical faders.

Additional low-cut filters can be inserted into the mic channels, also via the DSP menu, with a choice of 80Hz, 18dB/octave or 150Hz, 12dB/octave responses, and there are further global low-cut filters in the amplifier path that can be set to 50 or 70 Hz (both with 18dB/octave slopes). Each channel has one aux send and one dedicated effect send routed to the internal effects.

Between the mixer channels and the master section is the effects strip, which hosts the effect level control and effect-to-aux send, as well as an effect on/off button. Above this are three buttons for global compression on/bypass, talkover, and mute, which silences all five mic/line channels at once.

Both conventional speaker outputs (4 to 8 Ω) are on Speakon connectors, while the 100V line ‘Direct Drive’ speaker outputs are on a connector block. When not in Direct Drive mode, this connector block is in parallel with the Speakon outs. The two internal power amplifiers can also be split and used for different audio signals, as routed from the master outputs, making it possible, for example, to run a mono PA and to power a passive stage monitor at the same time. 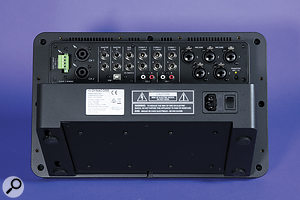 Including the aux, there are three line outs in total, any of which can be internally routed to the on-board Class-D amplifier.

In the master section, the on-board effects provide 32 editable presets and include the necessary delay and reverb options that are a mainstay of live performance, as well as a few chorus effects. The number of editable parameters is small but adequately flexible to meet most requirements. However, there’s no tap-tempo delay button, which is somewhat remiss given how useful such things are. LPN speaker processing, standing for Low-Pass-Notch filters, is also accessed via the DSP section, and is claimed to correct the frequency and phase response of the connected loudspeakers. According to Dynacord, the LPN filter optimises the transient response of the connected speaker to produce a more powerful sound from small speakers, but there are few clues as to how this is achieved. However, it does seem to help to maintain clarity.

There are three line-level outputs, on TRS jacks using ground-compensated balancing. Each has its own seven-band graphic EQ (adjusted by a set of familiar graphic sliders in the master section) and an adjustable peak limiter.

Master A, which can be set to mono or stereo, is fed post the master A volume control and may be used to feed the internal amplifiers, external power amplifiers or powered speakers. Master output B, switchable pre or post the master volume control, has a delay option, adjustable up to 150ms, for use in distributed speaker systems, but it may also be used to feed stage monitors or a subwoofer. Similarly the aux output can be sourced pre or post fader and may be used to feed monitors. By default this is fed from the aux bus, but the routing to all the master outs and the input source for the internal amplifiers can be changed via the DSP menu.

Comprehensive amplifier protection is built in, and a yellow indicator warns that the amplifiers are running at their limit. The limiter warning LED also lights if the amplifier reducers its output due to overheating or a shorted speaker. The technical spec is impressive, with a 15Hz-22kHz response (-3dB) from any mixer input to any mixer output. The headroom is generous in all sections and the noise and distortion figures are comparable with those of other well-designed mixers.

Operationally the mixer is very straightforward, and even the digital section can be explored in a few moments without recourse to the manual. Having three outputs (if you include the aux), each with individual graphic EQ, could be useful in multi-speaker setups, as could the delay facility. Menu options include the channel filter, compressors and ducking, plus the ability to set a low-cut filter in the output. Other pages access basic setup functions including the option to set an anti-tamper password.

On the whole the mixer behaves extremely well, delivers plenty of clean power, and the effects are well suited to live performance without being over-complicated — though having a three-band EQ with a fixed mid might be considered a little restrictive. On an ergonomic note it’s worth pointing out that the mixer needs to be transported in a solid case as there’s nothing to protect the front-panel controls. The front panel itself is also a little glossy, which might be an issue under some lighting conditions.

As with many DSP multi-function sections, the extra features are welcome but the means to access them can be a little slow. For example, the transport controls for the MP3 playback are on the screen so any precision stopping and starting relies on you being on the right page and being quick with the cursor controls. That said, the MP3 playback worked with no fuss. I fed it a FAT32 formatted memory stick with a few MP3 songs on it and it read them right away and displayed both the titles and the elapsed playing time. Similarly, the USB recording worked right off, appearing as a generic USB interface in Logic Pro, allowing recordings to be made at 32, 44.1 or 48 kHz sample rates, at 16-bit.

Depending on how you look at it, the Dynacord PM502 might seem to be an expensive way to buy a handful of mixer channels and a power stage — or it could be the perfect solution for your needs. On the one hand you could buy a pair of powered speakers and a small mixer with effects for around the same price, but in an installation situation all those extra features really come into their own, especially the additional master outputs, the ducking and the 100V line-drive capability, which is often used in churches or other locations where multiple speakers need to be strung out over a long distance. DJs will also find the ducking useful.

There’s no denying that Dynacord’s engineers really think their designs through and then deliver a solidly engineered solution, but for mobile music use, you’d definitely need a case for this mixer to protect the knobs. Properly protected, however, the PM502 should give many years of reliable service, and if you already have some good passive PA speakers, then the format makes a lot of sense providing there are enough input channels to meet your needs.

Powered mixers are available from a number of manufacturers including Studiomaster, but none that I know of include a 100 Volt line output option, as the PM502 does.

This is a very flexible and compact mixer but it may appeal more to the installation market than to gigging musicians.