Do these DSP-equipped speakers from Dynacord's new A-Line series sound as classy as they look? 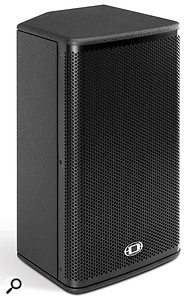 The new A-Line range from Dynacord aims to bring the company's portable live-sound speakers to a lower price point, but without sacrificing too much in the way of performance. The family consists of 12-inch and 15-inch two-way speakers, plus an 18-inch subwoofer, all of which are available in either active or passive versions. I took custody of a pair of A112A and A118A self-powered speakers — the 12-inch model and 18-inch subwoofer, respectively — and got the chance to try them out at a gig.

The first thing I noticed about these speakers was their compact overall size: the A112A is only just over 14 inches across at its widest point, and the slight narrowing of the cabinet at the front adds to the slimline appearance (they are about three inches narrower than my own EV SXA360s, for example), which would be a desirable feature for certain types of 'low-profile' application. The A118A subwoofer is also compact and neat, measuring just under 20 inches across by 22.6 inches deep.

Construction is from 15mm plywood, and the black 'spatter' paint finish is non-reflective, smooth enough to wipe down easily, and also appears to be quite a thick coating. The black, powder-coated steel grille is well fitted and strong enough to withstand a moderate level of abuse, and there is a layer of lining material behind the steelwork that provides a further level of protection to the drivers within. All told, there is a nice 'pro' look to these speakers. 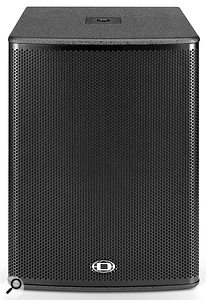 Four grippy rubber feet are provided on the bottom of the cabinets, and these are recessed into the surface to prevent them being pulled out if the unit is dragged across the floor. The A112A is designed to be used as a main speaker or floor monitor, and when it's laid on its angled side-panel the drivers face up at 60 degrees to the horizontal, which is good for close stage-monitor work and perfect for orchestra pits. The angled surface isn't equipped with rubber feet, though, so you'd probably need to stand it on some kind of non-slip mat.

The quality of external hardware on the A-Line is impressive, and the carrying handles are strong, well-proportioned and do their job well. The A112A has a single pole socket, which was a good fit with the poles and stands I used, but it doesn't have a clamp screw, or an option to angle the speaker downwards. The lack of a clamping screw isn't a big deal (the speakers sat nice and level for me), but the ability to angle them downwards would have been desirable, especially as they are aimed at smaller venues, where this can be a very useful option. The pole socket on top of the A118A subwoofer is the threaded type, and provides a very stable and secure fixing for full-range units mounted above.

The control panels of the A-Line speakers are unfussy and very clearly laid out. The A112A has two inputs available. Input 1 has a balanced, 'combi' type XLR/TRS jack connector (which will also accept unbalanced jacks for line-level signals), and also has a pair of unbalanced RCA phono sockets for 'consumer' equipment such as MP3 players. These operate at the -10dBu standard, and are summed to mono internally. Input 2 has a balanced XLR/jack socket only, but can be switched to operate at higher sensitivity to allow direct connection of a microphone. The mic/line switch is a push-button type, and I didn't encounter any problems with it accidentally changing its setting

The master level control, which sits alongside a limiter warning LED, sets the level of the mixed inputs going to the DSP/power-amp section. Like the input-level knobs, this has a calibrated guide scale, and a range that goes from silent to +10dB.

Most of the signal processing that goes on in the A-Line speakers is automatic, but the A112A offers some EQ options, by means of two slide switches in the master section. There is a mode switch that brings in an optimised monitor EQ curve, designed to limit unwanted low-frequency response and increase clarity in the vocal range. The other switch is a low-cut option, which rolls off the LF below 100Hz. This is intended for use when the A112A is being fed a full-range (unfiltered) signal from a subwoofer.

The A112A features two inputs, including mic and line options, a link output, and both monitor and 'main' EQ controls.The A112A provides a link output, with a switched option to include the mixed inputs (ie. the same signal that goes to the amp section), or the pre-fader input from input 1 only. The link output is not controlled by the master level setting, and would therefore be useful for daisy-chaining applications where individual speakers need to be set at different levels, or where local signals are only required from that particular speaker.

The A118A subwoofer has an even simpler control panel, with a single input socket (balanced XLR/TRS) and a single level control. There's a limiter LED, a switch for reversing signal polarity, and a link output. This is a full-range output, so if it is used for feeding to the A112A top cabs, their low-cut filters would normally be switched in. I found that although this link output is an active output and not a direct hard-wired connection, it does provide an output when the sub is switched off, but at a lower level than when powered up.

The input, processing and power-amp circuitry is all housed in an electronics package located in the rear of the cabinet, and the modern power supply and Class-D output stage mean that weight is kept low, and that no large heat-sink fins or fans are needed. Output power rating is 420W RMS for the A112A and 305W RMS for the A118A. The drivers used appear to be ElectroVoice models — indeed, the A112A's HF driver (crossed over at 1.7kHz) is attached to a 90 x 50-degree waveguide bearing an EV logo.

Today's self-powered speakers often rely on internal DSP to produce the desired frequency response, and to supply appropriate levels of protection for the amp and driver components. In these A-line speakers, Dynacord employ digital FIR (Finite Impulse Response) filter technology, which they say is responsible for enhanced performance and a smooth frequency response, particularly around the crossover region between the drivers.

The subwoofer's connection panel is sparse, with just a single input, a single output and a level control.

My first test was to rig a single A112A and an A118A in the workshop area for a listening session, and for side-by-side comparisons with other similar systems. My first impression, on playing my standard test tracks, was that the rig sounded very clean and 'hi-fi', with an easy and pleasing top end and a warm, solid bass. I spent about 20 minutes getting used to the sound, with the A118A sub feeding its link output to the A112A — the latter set up as main speakers and using the internal low-cut filter. There was hardly any switch-on/off noise, and the system idled quietly after the first few seconds of powering up.

The A112A seems to have some sort of muting/gating arrangement, which automatically kicks in after about five seconds, either when no input is applied or following initial power-up. This doesn't seem to display any adverse effects when a signal is re-applied — I couldn't detect any audible cropping of a suddenly unmuted signal.

On comparing the Dynacords with three other similar systems, I found that I still liked the clean top-end airiness of the A-Line speakers, but that they didn't sound quite as forward in the upper-mid region as my other systems. The Dynacords sounded more like how I might EQ a replay system for background music or stage accompaniment. They retained their smooth, clean top end throughout, and I was pleased that this quality didn't disappear when I began to push the speakers much harder.

My next step was to take the system out for a real test at a live gig. The requirement was very simple, but pretty demanding: only vocals through the PA, but with a live 20-piece backing band (brass plus rhythm section) playing acoustically, in a very lively and unforgiving venue. Seating capacity was about 200 and the room was not noted for its good sound, so I set up the A-Lines at either side of the performance area. They were closer to the walls than I'd have liked (but no other options were available), and about four feet in front of the solo female singer. During the fairly short sound-check, it was apparent that the A-Lines had brought their clean top end with them all the way from the workshop, and it was very easy indeed to produce a sweet vocal sound that was articulate, and which easily projected above the band accompaniment when required. In the lively room, the mid-range actually sounded about right, and adding in a bit extra was tried and dismissed as unnecessary.

In addition to the solo singer, we had to contend with a 12-strong vocal group, who sang either unaccompanied, with a small combo, or with the whole band. Again, the A-Line setup produced a pleasingly clear vocal sound with no hint of harshness — the whole thing sounded effortless, and everyone was very pleased with the overall sound.

My final test was to take the system outdoors into a neighbouring piece of paddock land, and run pre-recorded tracks through it at higher levels. I was happy with the balance between subs and tops, and even at high output levels the system remained well-balanced and clean. Although it wouldn't fill a football field, it would be more than capable of providing a decent volume for smaller outdoor events, such as garden functions or for community announcements. The A118A subs pack a good wallop, and sound very full, responsive and warm for their modest size. As you can imagine, this was a most enjoyable session!

In practical terms, the A-Line system was very quick and straightforward to rig and operate, although I would have preferred a handle on either side of the (otherwise very easy to manage) A112A, to make it easier to get it on and off stands or mounting poles by myself. When used in a floor-monitor position, the 60-degree angle of the cabinet front means that the connectors and controls are quite near the floor, and 30 degrees from the horizontal surface on which the cab is standing, so you have to make sure the connectors and leads are carefully placed. The subs, although compact for their performance capability, could do with a set of castors as an option, or at least some captive mounting fittings.

Those minor niggles aside, though, these active speakers form a very good-sounding, no-nonsense system that has an unobtrusive appearance and enough operating options to cope with most small to medium live-sound applications.

There are many products in this crowded area of the market. The most similar that come to mind include the Yamaha DXR and DSR series, dB Technologies' Flexsys speakers, JBL's PRX range and the QSC K series.

These compact and sturdy speakers deliver quality sound and ample level, while offering a useful variety of connection and linking options.