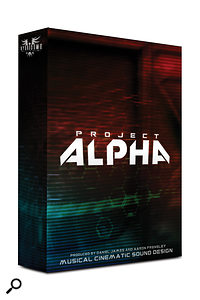 Project Alpha doesn't claim to provide for the orchestral side of things, however, as there are plenty of specialist orchestral libraries on the market. Instead, it deals with all those 'other' sounds, which fit in, around and behind, and are known (at least as far as Hybrid Two is concerned), as 'Impacts', 'Risers', 'Downers', 'Braaaams', 'Drones' and 'Reverse FX'. Consequently, the library includes folders containing individual samples and Kontakt-format 'instruments' for all of the above.

Although Project Alpha's custom interface, and the banks of sound files created using the interface's settings, won't work on versions of Kontakt that pre-date 5.1, those users who are planning to upgrade Kontakt in the near future might still want to get their copy of Project Alpha beforehand, as all of the raw samples are still accessible in WAV format. Anyone with a decent DAW will already have plug-ins for processing the raw WAVs, but Project Alpha's interface is exceptionally good and undoubtedly worth using if at all possible. In essence, it functions just like a synthesizer but also has its own step sequencer, which is easy to use and is also very effective for quickly transforming sounds into tempo-synchronised rhythmic effects.

I don't think it would be stretching the point too far to say that it is probably possible to create an entire film soundtrack — I'm thinking minimal John Carpenter here — simply by selecting one instrument and tweaking away at the interface controls for a few hours. Users have control over amplifier and filter ADSR envelopes, envelope amount, filter type, resonance and cutoff frequency. There is also a compressor, EQ, grit effect, delay, transient filter and convolution reverb, and almost all controls can be reached with a single button-click on the interface's main panel.

The basic samples are, in general, very interesting, tending towards the organic rather than the electronic. For example, quite a number of sounds were created by striking the body of a cello and plucking its strings in various ways. The duo's inventive sound-creation methods have also resulted in some very effective drum and percussion sounds, plus approximately 100 synth instruments created using just the interface.

At 2.3GB, the library is not large by today's standards, but it certainly feels like good value. As a library of WAV files aimed at film, TV, video game and media composers, it serves its purpose well, but the interface transforms the library into a very powerful sound-creation tool that is hard to fault. The only complaint one could have is that Project Alpha doesn't provide the orchestral sounds necessary for completing 'hybrid' projects, but at this price I wouldn't grumble about that. Tom Flint