We reviewed the JDK R22 compressor back in SOS June 2010, when the brand had just been launched by parent company API. You can read Paul White's review of the R22. API are themselves a subsidiary of ATI, and the R22 was based on the compressor in ATI's Paragon consoles. 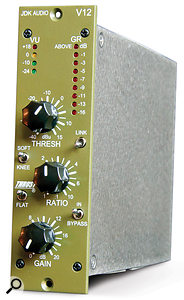 One of the latest offerings in the JDK range is the V12, which is essentially a single-channel circuit from the R22 presented as a single-width 500-series module. However, there are a few differences. This time, the metering (which is always on, even when the processed signal is bypassed) takes the shape of two LED bar-graph meters, rather than the VU needle meter in the R22. One is set to monitor output level by default, but switchable via an internal jumper to measure input level. The other is a gain-reduction meter, running down from 0dB over nine LEDs to -16dB.

Another difference is in the way the two compressors work with stereo signals. Two V12 modules can be stereo-linked using the built-in 0Ω bus on a standard API Lunchbox rack, as detailed in the comprehensive instruction manual. However, whereas one set of controls governs stereo operation on the R22, they're set independently on the two V12 modules, even though they operate from a common summed side-chain signal. That could be a boon or a curse, depending on what it is you're trying to achieve, but it's certainly no hardship as far as I'm concerned.

There are still no dedicated attack/release controls. Instead, the 10-40 ms attack and 30-400 ms release are automatically adapted, according to both the nature of the programme material and the current control settings. I might want to choose other compressors in some scenarios, to allow me more control over attack and release, but overall I found this system to be surprisingly effective.

As well as the standard threshold, make-up gain (up to +20dB) and ratio controls (the last via a detented pot offering fine degrees of fully recallable and easily matchable adjustment from 1-10:1), the V12 features the Thrust circuit used in other API and ATI products. This is a patent-protected facility, but as far as I can ascertain it's a form of side-chain high-pass filter, the result of switching it in being that low frequencies are filtered out of the side-chain signal, making the compressor less sensitive to the low end. Sonically, this translates as a fuller, cleaner, more solid sound, with the mid-range and high frequencies being less squished when, say, a kick or bass instrument sounds. In other words, the opposite of pumping! The only control not mentioned so far is a hard/soft knee switch, which does exactly what the label suggests.

I deployed the V12 on a range of sources, including piano, acoustic and electric guitar, vocals, drums and full mixes, and I can agree with Paul White's assessment in the R22 review — it's a really useful compressor for processing individual tracks in the mix. It's not 'transparent', by any means, but any dirt that's added is warm and musical-sounding, particularly on rock/blues material. The Thrust control makes the V12 particularly useful on drum loops, bass guitar and synth parts, but also on deep, booming male vocals. The lack of attack and release controls never really proved a problem in practice, although if this were my only available option, I have a feeling that I might miss them a little more over time on more complex stereo material.

This compressor, then, represents decent value for money if you already own a 500-series rack, although it's certainly up against some serious opposition in this format — particularly given the recent emergence of more aggressively priced products from the likes of Lindell Audio, IGS Audio and Golden Age Project, for example. Matt Houghton