Not only is this a remarkably high-quality microphone, but a very versatile one too, thanks to some cunning acoustic trickery... 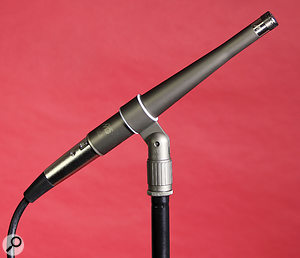 There is something very natural about the sound character of omnidirectional microphones. They don't have that slightly lean and phasey quality at the bass end that so many cardioids display, and also, while they inherently pick up a lot of spill from any sound sources nearby (as well as lots of reverberation or room acoustic), that 'off-axis' sound is always tonally neutral and in the right proportion, which makes it sit in a mix very naturally. Indeed, in many cases, that spill and room sound can actually help to glue a mix together in a way that you can hear in so many classic recordings.

I'm also a big fan of 'first-order' or 'pressure-operated' mics — which means true omnis and figure-of-eights — so I was very interested to try out Microtech Gefell's new pressure-operated, omnidirectional M221.

Sphere Of The Unknown

Interestingly, the M221 is supplied with two different-sized equalisation spheres. These two spheres, called the KA3 (30mm diameter) and KA4 (40mm diameter), are 'acoustic pressure equalisers': entirely passive devices comprising a solid ball of a dense plastic with a hole bored through the middle. These are designed to affect the way sound diffracts around the capsule, by causing a pressure build-up that changes the sound field close to the diaphragm. The effect is to boost the mid-range and HF response for on-axis sources in a kind of acoustic shelf equaliser. It's a technique that only works with omnidirectional pressure microphones, and, in the case of the M221, the HF lift starts from about 1kHz, levelling out at about +3dB between 3kHz and 12kHz. However, the low-end response isn't altered in any way.

As well as boosting high frequencies for on-axis sounds, the spheres have a high-frequency shadowing effect that reduces off-axis sensitivity at higher frequencies (from around 5kHz up) too, making the omni microphone distinctly directional. The overall effect is best described as providing 'focus', even when using the mic slightly further away from the source.

The size of the sphere determines the lowest frequency affected (larger equals lower), and so adding the sphere to the mic makes its polar response lean gently towards a pseudo-cardioid directionality at high frequencies, while retaining the nice low-end extension and naturalness typical of an omnidirectional mic.

This acoustical equalisation sphere idea is probably best known from the Neumann M50 microphone, in which the omni capacitor capsule was set within a 40mm acrylic sphere. The mid-range and HF directionality that results is fundamental to the performance and stereo imaging obtained from the legendary Decca Tree microphone array. Other manufacturers also offer sphere attachments with some of their small-diaphragm omnidirectional mics, including DPA, Schoeps and Neumann. 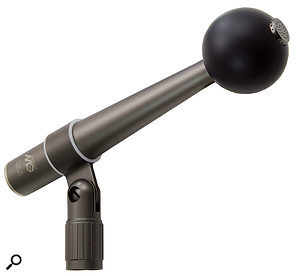 The M221 with a KA4 acoustic sphere fitted.

The M221 has an unusually small capsule about 12.5mm (half an inch) in diameter. The mic measures 170.4mm long and is more or less conical in shape, decreasing from a diameter of 21mm at the XLR connector to 12.7mm at the end of the capsule. The body is finished in a nice satin, dark-bronze paint, with a chrome collar just below the removable capsule. Weighing in at a modest 123g, the mic comes with a simple mic-stand adaptor and a 3/8-inch thread adaptor, and the unusual design of the clip has a nylon-lined ring through which the mic is inserted. Various shockmounts are also available as an option.

The MK221 capsule used here is actually from Microtech Gefell's measurement microphone range, and it can be unscrewed from the MV225 body to permit either of the spheres to be attached. The sphere is slid over the mic body, the capsule refitted, and then the sphere is slid back up until it snaps into position. A two-micron Nickel (metal) diaphragm is used, rather than the more usual gold-sputtered plastic (mylar) membrane, and it is claimed to have an excellent transient response.

The frequency response is specified as remaining with ±2dB between 20Hz and 20kHz and, as you might expect with a measurement heritage behind it, the plotted response is almost ruler-flat from about 5Hz, with only the mildest hint of a resonant peak (less than +1dB) at around 15kHz.

The M221's polar response is truly omnidirectional below about 4kHz, above which there is a slightly shadowing effect caused by the presence of the body, which narrows the response and gradually reduces the sensitivity to rearward sounds. Overall sensitivity is almost scarily high, at 50mV/Pa, which is around 6dB hotter than the average capacitor mic. Self-noise is 15dBA (DIN rating), which is very good indeed for a miniature-diaphragm capsule, and puts some large-diaphragm designs to shame! The reason for this is that the DC bias voltage is unusually high, at around 200V, whereas most large-diaphragm mics operate with a 60V-80V bias. The maximum SPL capability is 136dB (for 0.5 percent THD), and the phantom-power current requirement is 5.5mA — which is relatively high, although well below the phantom standard maximum of 10mA. The impedance-conversion electronics are transformerless, and provide a symmetrical balanced output.

The M221 follows in the wake of the success that US company Josephson have had with their C617SET omni mic, which combines MG's MK221 measurement capsule with a recording-grade preamp body of Josephson's own design. Amazingly, that model has even higher sensitivity (66mV/Pa) and fractionally lower self-noise (14dBA), but with less headroom and a fractionally lower price.

I was only supplied with a single M221, so I wasn't able to try it as a stereo array, which was a great shame, as I imagine the results on a Jecklin disc would have been impressive. Nevertheless, I was able to compare it directly against my own Sennheiser MKH20 (which is diffuse-field/free-field switchable) and Neumann KM183 (diffuse-field equalised), as well as against a borrowed DPA 4006 (which can be EQ'ed via interchangeable capsule grids).

My initial impression was of a very similar quality between all of these mics, although bearing in mind the HF rise in the Neumann. However, when I auditioned the M221 critically against the DPA, I felt that the Microtech Gefell model gave an impression of a little more body and low-end weight. Against the Sennheiser, I thought the transient response seemed a tad crisper and the high end seemed slightly more airy and open. The M221 was also noticeably quieter than the Sennheiser (which I've always thought of as a quiet mic!), and had about as much noise as the DPA. Part of this might be down to the elevated output requiring less preamp gain but, even so, in practice it comes across as a very quiet, very detailed and very high-resolution microphone, with a fabulously extended LF response and a beautifully neutral and natural sound character.

Adding the larger 40mm sphere has an interesting effect on the mic. The basic tonality remains similar, but there is a definite mid-range boost that helps to bring out the detail and clarity in the source, while simultaneously offsetting the balance of direct to reverberant sound. It is the aural equivalent of zooming a camera lens slightly: you get more source and less room, but in a very natural way that simple equalisation just can't achieve. Switching to the smaller sphere does the same thing, but with the effect starting a little higher up, and switching between the KA3 and KA4 spheres is similar to sweeping an EQ up and down to find the sweet spot for the source! Including both spheres with the mic provides significant added value and increases the versatility greatly, essentially providing three mics in one.

The M221 is appropriate for any high-end recording application. I'd gladly use a pair (or, better still, a trio) for orchestral, organ and piano classical music. It would also work extremely well on solo acoustic guitar, harp and delicate hand percussion — or anything percussive and with complex harmonic structures. I'll always love my MKH20s, but I fear I may have just become completely infatuated with the M221!

Although pretty expensive, the M221 costs virtually the same as the Josephson C617SET, but comes with the two sphere adaptors, making it much more versatile. Cost-wise, the MG mic also sits midway between the DPA 4006A and 4006 TL, while the Sennheiser MKH20 looks like a bargain in comparison!

A slim, elegant and ultra high-quality omni mic with impressive technical performance. The inclusion of two acoustic spheres greatly adds to its versatility.