Gefell have long been respected in the studio, and now they’re hoping to tackle the live-sound market, too.

Founded in 1928, Microtech Gefell were originally a part of the Neumann microphone company, until the events of World War 2 put Gefell on the Eastern side of the Berlin wall and the main Neumann factory on the West. There was no commercial contact between the two companies until the wall came down, at which time communication was re-established. Today Microtech Gefell are respected microphone manufacturers in their own right, most commonly associated with high-end studio microphones. That means that when they turn their corporate hands to offering dynamic mics targeting the live-sound market, you can expect something a little bit special. As with many dynamic microphones, however, there are, of course, also studio applications.

The two mics on review are outwardly similar, the MD100 offering a cardioid pickup pattern and the MD110 a hypercardioid pattern. Both are the result of cooperation between Microtech Gefell and German dynamic mic specialists Mikrofontechnik Leipzig GmbH (MTL). As I understand it, Mikrofontechnik Leipzig undertake the physical manufacture of the product, with the full range including the MD120 omnidirectional model, and short-bodied versions of all three, designed to be fitted to the end of a radio pack.

Housed in identically tapered metal bodies, weighing a comfortable 375g, finished in an attractive dark bronze and topped with identical fabric-lined metal baskets, the only difference between the two models on review seems to be the choice of capsule. The MD100 has a 50Hz to 16kHz frequency range, and the unusually honest polar plot shows all the little wrinkles and dips that cosmetically smoother ‘marketing’ plots often hide. There’s no obvious presence peak, though the overall response is lifted slightly between around 1kHz and 10kHz.

The hypercardioid MD110 has a similar response curve but with more of a presence hump, centred at around 5kHz. In both cases the sensitivity is around 1.5mV/Pa (±3dB), which is fairly typical for this type of microphone. Unscrewing the basket reveals little outward difference between the capsules other than the colour of the fabric wrapped around it. 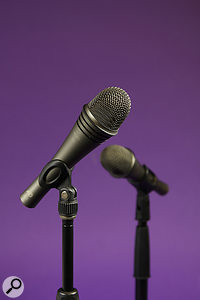 Both mics have a conical, rubbery protuberance around 10mm long at the centre of the capsule, and both capsules sit in a resilient mount that offers movement in all three axes to minimise handling noise. Slots are machined into the body below the capsule to handle the rear venting, and there’s a rubber ‘O’ ring surrounding the mic’s widest point, to offer some cushioning when the mic is put down.

A studio-based test of sound quality showed both mics to sound very similar when used on-axis, presenting a well-balanced sound with less coloration than is often heard in stage microphones. I put this down to the wider, more subtle presence bumps. If more presence is required, a little upper-mid EQ boost should be able to provide it. There’s a decent resistance to popping when used close to the mouth, though engaging the low-cut filters on the desk would be advisable with any mic used in this way, especially if the PA is fitted with subwoofers.

Handling noise is commendably low and both mics exhibit excellent off-axis rejection, as is confirmed by their strong resistance to feedback when the level is wound up. As expected, the hypercardioid MD110 exhibits a greater fall-off in level as you move off-axis, with near-total rejection over the rear 180 degrees. Even the inevitable rear lobe that all hypercardioid mics have didn’t seem to compromise the rear rejection to any significant degree.

Though the MD100 has a slightly wider sweet spot before the level drops off to a noticeable degree, it still provides significant rejection once you get past 90 degrees off-axis, and may be more forgiving of those vocalists with a more ‘relaxed’ mic technique.

With a street price of around twice that of the ‘industry standard’ live vocal dynamic mic, these Microtech Gefell models are not exactly cheap, but they are seriously good microphones that should last a lifetime, and you can be fairly confident that you can get them serviced if you ever need to.

When looking for alternative live vocal mics, also check out hand-held capacitor models as dynamic models are not the only game in town for live use. Direct competitors for these models come from the likes of Sennheiser, Audix, AKG and of course Shure’s Beta models, though lots of companies now make good live mics, including Telefunken with their M80.

A serious vocal mic at a serious price, but then these mics could last a lifetime.