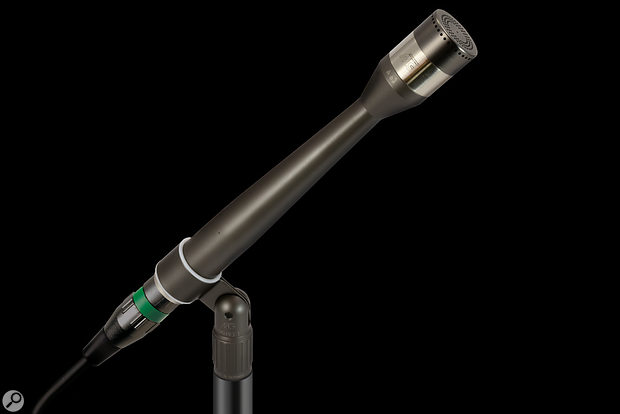 Measurement mics are necessarily neutral and accurate, and that's often just what you want when recording music too. Gefell's newest offering, based around a measurement capsule, has those characteristics in abundance.

It was around six years ago (SOS June 2013) that I reviewed Microtech Gefell's M221 omnidirectional microphone. In addition to being a particularly well-designed mic — combining the company's 12.5mm MK221 measurement capsule with the MV225 impedance-converter preamp body — the M221 is also supplied with a pair of 'acoustic pressure equaliser' (APE) spheres. These fit over the capsule to introduce different levels of directionality at mid and high frequencies, making the M221 a particularly versatile and impressive microphone. The APEs shape the polar response in a frequency-selective way, much like the classic Neumann M50s capsule, making the M221 an attractive option for use in Decca Tree-style mic arrays.

I mention all this because the latest addition to the Gefell range — the new M102 microphone — follows a similar theme: it combines another of the manufacturer's established measurement capsules with the same transformerless MV225 preamp body. However, in this new incarnation the capsule (the MK102) is a one-inch omnidirectional design originally intended for use with IEC Type 1 sound-level meters, and it lacks any APEs or other sound-modifying accessories.

Gefell's engineering is frequently innovative and unusual, and the MK102 is no exception. The capsule is made almost entirely from nickel, and the large diaphragm is actually 'grown' in place — a manufacturing technique unique to Gefell, with the benefit of creating a structure which is genuinely symmetrical in all directions and perfectly integrated with the capsule body. Gefell claim this intriguing technology provides lower levels of distortion than more conventionally assembled diaphragm designs. It also apparently provides excellent long-term stability and performance consistency.

Other unusual facets of the M102 are that the MV225 impedance-converting body generates a relatively high 200V polarising voltage (via DC-DC conversion from standard 48V phantom power), and the capsule's rear electrode is insulated from the capsule housing by a quartz glass plate. The unusually high polarising voltage imparts a greater output voltage for a given amount of diaphragm movement, and that results in a higher overall sensitivity, lower distortion effects, and increased headroom.

To look at, the only noticeable difference between the capsule supplied in the new M102 studio mic set and the standard MK102 measurement capsule is that the new model features a dark bronze finish on its visible top part, to match the MV225 body. Also, rather than screwing directly onto the mic body, a conical adaptor collar is provided that screws in between the capsule and body.

The M102 is equalised for the free-field, meaning it has a flat frequency response when used relatively close to the sound source — as an 'accent mic', for example, or in a close main array like a Decca Tree. Conversely, it will tend to sound a little dull (-3dB at 5kHz) if used in the far-field, as a 'space mic', say.

The M102 studio set sent for review was supplied in the same wooden storage box as Gefell's 'Measuring Microphone Modul System', which contains three different-sized capsules and their mounting adaptors, as well as the preamp body and stand clip. As the studio set has only the one capsule, that leaves some unoccupied recesses in the foam liner and — more importantly — it requires the mic to be disassembled for storage, and reassembled each time it is used. Happily, Microtech Gefell tell us that they have since re-worked the foam so that the case can house the whole of the microphone.

The studio set comprises the MV225 body, a slip-on stand adaptor (supplied with 3/8-inch thread adaptor), the MK102 capsule and its mounting collar. A donut-style shockmount is also available as a cost option. Physically, the M102 measures 180mm in length, with a diameter of 21mm at the XLR end of the body and 24mm at the front of the capsule, and it is slightly heavier than its M221 sibling at 210g.

The M102 is a very fine microphone indeed, with superb levels of transparency and resolution, deep bass extension, and crisp clear transients.

The technical specifications are similar to those of the M221, with the same nominal sensitivity of 50mV/Pa (around 6dB hotter than most high-output capacitor mics). On loud and close sources this could generate output levels in the region of +18dBu, which may well stress the headroom margins of many mic preamps! The M102's self-noise figure is 4dB better than the M221 at around 11dB A-weighted, principally because of the larger diaphragm surface area, and the maximum SPL (for 0.5 percent THD) is 136dB, which gives a working dynamic range of 125dB.

A symmetrical balanced signal is provided by the transformerless preamp body, from a source impedance of 100Ω, and the input impedance seen by the capsule is a whopping 10GΩ. Powering is via standard 48V phantom, requiring 5.5mA.

Looking at the on-axis frequency response, the curve is ruler flat from below 20Hz to 3kHz, above which there is a very small (less than 1dB) dip and peak — the latter caused by the diaphragm's well-damped self-resonance at 8.5kHz — and the response rolls off gently above 10kHz, reaching -2dB at 20kHz. The polar response is pretty much perfectly omnidirectional for all frequencies below 2kHz, but the pattern starts to get increasingly narrow and less sensitive to rearward sounds at higher frequencies, purely because of the acoustic shadowing effect of the physically large capsule body. At 8kHz the response is just over 6dB down from 90 degrees off axis all the way around the rear, and this attenuation rises to -10dB at 12kHz around 90 degrees and -14dB at 180 degrees.

Although Gefell's production tolerances are pretty tight, if the intention is to use the M102 in stereo arrays or Decca Trees the company will supply precisely matched pairs or triples on request.

Microtech Gefell's UK distributors, Sound-Link, supplied a pair of M102s for this review, as well as a single M221 for comparison purposes. I also had my own selection of free-field equalised studio omnidirectional mics available, including DPA 4006s and Sennheiser MKH20s. It would have been nice to compare the Gefell against the Schoeps MK2/CCM2 as well, but I wasn't able to organise a loan in time, unfortunately.

It is probably unnecessary to state the obvious fact that the M102 is a very fine microphone indeed, with superb levels of transparency and resolution, deep bass extension, and crisp clear transients. The on-axis tonality is almost perfectly linear and neutral, self-noise is extremely low, and even exceedingly loud signals are handled effortlessly with generous, clean headroom. I wasn't surprised to find it hard to distinguish between the M102 and the M221 with on-axis sources in a dead-sounding environment, but it is the off-axis response where some character differences emerge, with the M102 sounding very slightly darker and/or warmer. When recording in a lively acoustic, this characteristic provides a gentle but useful degree of HF discrimination between the wanted on-axis source and the ambient acoustic, audience noise, or natural spill from other nearby sources — so aiming the mic at or away from sound sources can help to improve separation and focus, despite the nominal omnidirectional polar pattern.

There aren't many true-omni capsules on the market with a large diaphragm, and the few I can think of are based on measurement capsules too, so the M102 is quite an unusual product bringing a distinct but subtle set of characteristics to the marketplace. Naturally, given its quality and unique construction, this is a very expensive microphone but, for those seeking the very best in high-end omni mics, the M102 is certainly worth exploring in person to ascertain whether its unusual features and qualities complement the intended applications.

Another measurement mic repurposed as a high-quality studio mic, albeit one with an unusual capsule construction and subtly‑shaped response characteristics.