The Quad Peak Animation System, aka QPAS, is a filter aimed primarily at stereo imaging and animation. As its name implies, the QPAS contains four filters. These are arranged as a pair of dual-peak multimode filters with simultaneous low-, band-, high- and smile-pass outputs. Yes, smile-pass — what a great name — we'll come back to that. There is a common cutoff and resonance control, but movement of the individual filters comes from each channel having a separate Radiate control, which varies the space between the twin cutoff peaks as well as their distance from the main frequency cutoff control. 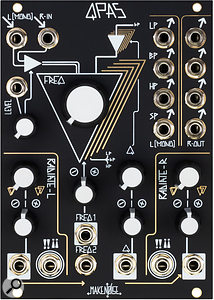 Make Noise QPAS. Size: 18HP. Current: +12V 166mA, -12V 190mA.There is a single pair of inputs, plus a pair of outputs for each filter type. Inputs and outputs are cleverly normalised so that you can use the QPAS in mono-to-mono, mono-to-stereo, stereo-to-stereo or even stereo-to-mono configurations. You could also use the two filter channels as dual-mono, effectively having two dual-peak filters to play with, but the single shared cutoff and resonance controls mean that this isn't the ideal filter for that.

The QPAS filters are 12dB/Oct. The master frequency cutoff can be automated with two CV inputs. One has an attenuvertor and the other is unattenuated. Because of the design of the quad peaks spreading out the way they do, 1V/Oct control isn't really possible but you can get close at some settings. As well as the master frequency, which affects all the filter cores, each channel has a Radiate control, which moves its pair apart from each other and away from the master frequency. Both Radiate controls also have a CV input and attenuvertor for external control. Radiate is where the stereo imaging of the QPAS really opens up. Using the QPAS stereo outputs with either a mono or stereo input, then animating the radiate controls separately, creates all kinds of delicious wide stereo movement.

As we've come to expect from Make Noise, there are some thoughtful design decisions. The first is the VCA. Whilst most filters will allow you to boost or attenuate the signal going into the filters using a single control, the QPAS gives you a CV input to control this also. Because the VCA is before the filter you can do some nice tricks like getting the filter to ring out even once the input signal has died away.

Each channel also has a !! input. That's not a misprint, it has no name, just this odd icon that looks like bowling pins. I'm going to call this 'the exciter', because why not? The exciter is a modulation input. Feed it with gates, triggers, clocks or audio signals and it will have some unspecified effect on the filters. It sounds to me like some kind of pingable envelope. Signals above a certain threshold seem to fire off little frequency pings which are rather pleasing to the ear. Certainly, when clocked or driven from some sequenced source, they help to add rhythmic modulation to any existing CV control you might have happening already. They're a nice bonus to have.

If, like me, your modular rig has long been a monophonic powerhouse, the QPAS could be your gateway to a world of binaural loveliness.

I would describe the QPAS sound as modern. It doesn't immediately evoke the 1970s or radiophonic workshops in the way that some filters do. Instead it is a more controlled, almost reserved affair, but with an organic warmth that is most pleasing. I suppose with four filters under the hood, reining them in a bit makes very good sense. The resonance never gets out of control, but seems to blend with the original sound in a way that I really enjoy. For me there was a creamy sweet spot in the first 40 percent of the filter resonance control. With higher amounts, the peaks become more oscillator-like, as you'd expect, and often with a bit of crunch, depending on the input levels, but again it never feels out of control. As with most 12dB/Oct filters, there is no self resonance, but there is resonance CV control, which is always welcome.

The low-, band- and high-pass filter types are much as you'd expect, but a special mention must go to the smile-pass filter. Make Noise say that the filter type gradually morphs as you adjust the filter cutoff. The goal is to create a subtle filter response, whose amplitude remains consistent regardless of frequency. The overall effect is something close to a peak or notch filter depending on how you use it. Smile-pass is great on pads and drones, adding delicate movement to the sound that isn't immediately identifiable as a filter.

In use, I found the QPAS to be an invaluable tool in creating stereo movement, particularly from mono sources. Plug a wavetable oscillator into the left input, bring up the level, animate the Radiate controls with a pair of LFOs or similar (and why not send them to the wavetable positions too), add a smidge of resonance and monitor the output in glorious stereo. The result is a spacious, swirling effect which feels sophisticated and musical.

If, like me, your modular rig has long been a monophonic powerhouse, the QPAS could be your gateway to a world of binaural loveliness. Its features have been well chosen to offer enough control, but not too much. In other words, despite being four filters, it's easy to use and complex sounds can be crafted using just a couple of patch cables. There are many dual filters on the market, but not many that focus on simple stereo operation as well as this one. The QPAS is another winner from Make Noise. I'll be trying to make a permanent place for it in my system.