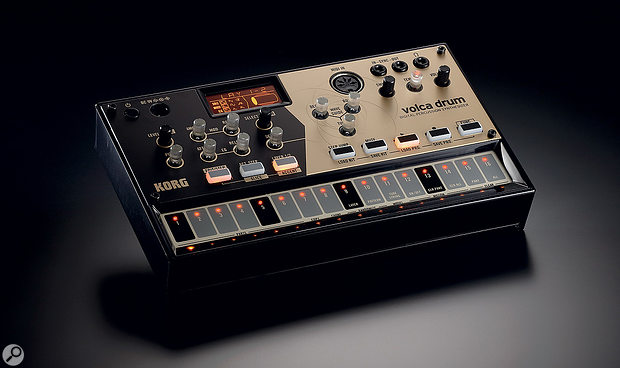 The Volca Drum joins the Volca Kick and Volca Beats making it the third drum-focused Volca in the series. This time however, the sound generation is 100 percent digital. Korg call it a "percussion synthesizer", which is really just a way to say it can make all manner of interesting and unusual drum sounds. Certainly with six voices, dual layers per voice, wave folding, audio rate modulation, a Waveguide Resonator and the tried-and-tested Volca sequencer, it looks like being a fun ride.

I suspect most readers are now familiar with the Volca format. A 193 x 115 x 46 mm plastic case houses not only the drum machine, but also a small speaker and a battery compartment for six AA batteries. Power can also come from a 9V, 1700mA, centre-positive power supply. Batteries are included, but the power supply isn't. Korg sell a rather expensive KA-350 power supply, but any matching PSU will do.

As a desktop unit, all input and output sockets appear at the top. In this case we have the 9V PSU socket, a single 5-pin DIN MIDI input socket, sync in and out on 3.5mm jacks and a stereo audio output. Below that are the various knobs and buttons for sound design and transport controls. And at the bottom, the touch-sensitive keyboard, which is used for triggering parts, X0X-style sequencing and various other functions.

One unfamiliar sight is the custom LCD screen, a first for the Volca range. It is used for showing aspects of the DSP engine that would be difficult to keep track of using knobs alone and also gives useful feedback when doing operations such as copy and paste, or load and save. I must say, it looks rather snazzy with its orange, retro–styled fonts.

At the Volca Drum's core are six identical drum voices. Each one has two independent layers, and each layer is built from a sound source, a pitch modulator and an amplitude envelope. Additionally, each drum voice has a number of insert effects and can send to the Waveguide Resonator, a feedback delay effect, which we'll explore later.

You might then proceed to choose a pitch modulation source from a rise and fall envelope, a sine wave or a random wave. The speed of the source and the amount can both be controlled from their relative front panel controls. Finally, you choose an amplitude envelope type from linear attack release, exponential attack release or a multi-peak attack release. The multi-peak option is great for clap emulation or ratchet-type sounds. A duo of knobs control the attack and release times of the chosen envelope. 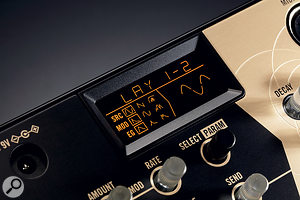 The Volca Drum is the first Volca to have an LCD screen. Good news for anyone curious about what the DSP engine is up to.I will point out that a single encoder is used to select sound source, pitch modulation source and amp modulation source. This is made possible by putting every combination of the three in what is effectively a long list and scrolling through them using the encoder. The LCD screen gives feedback on what combination you have selected, but it can feel cumbersome finding the right trio. For example, if you just want to change the sound source from noise to sine wave, you might have to turn the encoder through 20 or more clicks before finding the right combination again and you end up changing the modulation sources many times along the way. It's actually harder to describe than it is to use, but I can't help feeling that a couple of extra knobs or buttons would have made the process far simpler.

Once you have a layer to your liking you can repeat this for the second layer. The Layer 1/2 button is used to select which layer is currently selected for editing and you can also edit both at once, useful for making edits to the overall sound, like tuning or adjusting envelopes together. The reason for using layers becomes clear once you start to design sounds. Many drum sounds can be approximated using two elements. For example, a typical snare sound can be created using a short noise transient together with a longer tonal 'body'. Having the two layers is important for certain sounds, but can also be a neat way to squeeze more sounds from the Volca Drum because, as we'll see, you can automate any parameter in the sequencer. So crossfading from one layer to another is a breeze.

If all this sounds like a lot of work (it really shouldn't) or you just fancy rolling the dice, you can randomise the sound controls for the currently selected Layer(s). Unlike many randomise functions, I found this one really useful. It spits out some excellent sounds and rarely ends up with silence or harsh, unusable timbres. I like it so much, I wish you could sequence it!

Once you find a nice combination of layers, you can apply some simple digital effects in the form of bit-reduction, wave-folding and overdrive. Each one gives a different way to rough up your sound, and you can apply all three at once if you feel the need. The effects don't have their own front panel controls. Instead they are accessed by hitting the Edit/Step button and then using the Param encoder to select an effect, and the Value encoder to change the amount. Mixing options are also found in the same menu list with level and pan allowing you to balance the audio at the master stereo output.

The last sound design tool at your disposal is the Waveguide Resonator. Each of the six parts can send to the resonator using the dedicated Send control. Korg could have thrown a simple delay or reverb into the Volca Drum, but the Resonator is something more unique. Waveguide resonators are often used in physical modelling of string plucks or wind instruments. This one has String and Tube modes, each of which uses a different model best suited for emulating those sounds. Of course, using such a physical modelling tool with drums produces all kinds of wild and interesting effects. With just a trio of controls; Decay, Body and Tune, flanging and phasing, comb–filtering, clangorous metallic reverbs and lengthy digital delays are all possible. Best of all, though, is the ability to automate the Waveguide Resonator, and the send amount for each part, in the sequencer.

It delivers quirky, flexible electronic percussion by the bucketload and the sequencer is probably the most advanced Volca sequencer yet.

The sequencer is of course an essential part of every Volca. Korg have done a great job of making each Volca's sequencer subtly different from the next, and the Volca Drum is no exception. The sequencer is controlled and programmed using the 16 touch sensitive keys. In normal operation these are used to trigger the six parts, but they also double up for step-sequencer programming as well as triggering assorted functions. Hitting the Edit/Step button puts you into sequencer edit mode where the 16 buttons become 16 steps on or off for the currently selected part. If you don't fancy programming this way you can also just enter record and tap in rhythms in real time, or hit the Randomise Pattern function to insert a random bunch of triggers for you.

Despite each pattern only being a bar long, you can inject some additional interest by adjusting the probability of each step from 0 to 100 percent. You can also enable what Korg call Slices for each step. A slice is a repeated note within a step, what old-school sequencers might call a ratchet. Up to 16 slices can be added per step. Perfect for fast trills, machine gun repeats or stutter edits.

Accents can also be added per part. Given that there is no velocity, this is a good way to add some dynamics to a pattern. Holding a step and adjusting the Value control will alter the amount of Accent for that step. Fans of polymeters will be glad to see the return of the Active Step function too. This allows steps to be deactivated and ignored, effectively shortening the pattern for that part to fewer than 16 steps, resulting in different length sequences for different parts.