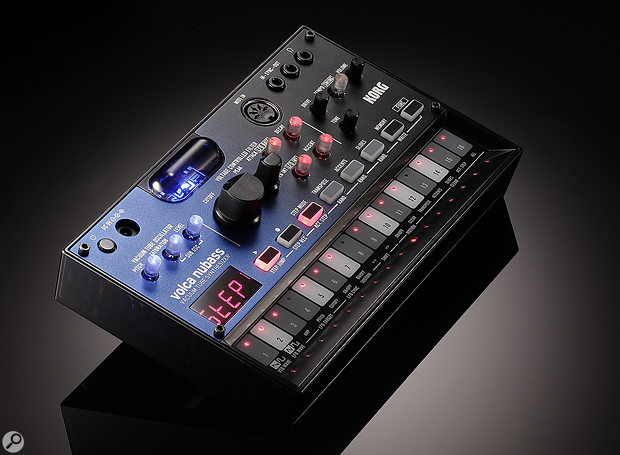 If you're looking to embark on a cut-price acid odyssey, look no further...

Everybody needs a 303, so Fatboy Slim tells us. The original silver box is unobtainable to most, but with such a popular sound, it was only a matter of time before Korg took on the challenge. Enter the Volca Nubass. It wouldn't be a Volca, of course, without a few surprises along the way.

You would be forgiven for missing it at first glance, but the Nubass is a Volca with a single purpose: acid basslines. As we have become accustomed to, Korg do things with their own inimitable style, and so this acid machine comes with a vacuum tube, sub-oscillator, analogue overdrive and, of course, the esteemed Volca sequencer.

The customary Volca format is present and correct. The sturdy plastic case comes with a small speaker and battery compartment for six AA batteries, making it possibly the most portable self-contained acid synth on the market. Power can also come from a 9V, 1700mA, centre-positive power supply, compatible with all other Volcas, although this must be purchased separately.

Inputs and outputs are as simple as they come. A single full-sized MIDI input allows you to sequence externally or synchronise the internal sequencer via MIDI clock. Alternatively, the standard Volca sync in and out are present for connecting and synchronising multiple Volcas. Then, lastly, there is a single mini-jack audio output, which comes with a dedicated volume control.

Nestled amongst the connections at the top is a domed transparent window which exposes the part of the circuit board beneath that holds the vacuum tube. Rather than the old chunky '70s glass tube, the new design, which is entirely Korg's own, is much smaller and perhaps less visually impressive, but it lights up in a pleasing cold blue colour. Finally, down in the bottom-left corner, you'll find a four-digit LCD display which gives helpful hints on current editing modes. For example, when you're editing Accents in the sequencer, it will display 'ACNT'. Given that most modes have a dedicated rubberised button which lights up, and that the Nubass is pretty simple to use anyway, I'm not sure how necessary the display is, but it's there.

Pushing the resonance up rewards you with the squelchy, occasionally shrieking peaks which cause dance floors everywhere to spontaneously combust.

The classic 303 acid synth is a simple one. Square or sawtooth oscillator into that filter with a single-stage envelope that controls the decay of both amplitude and filter frequency. The Volca Nubass follows this design quite closely, but adds a few extras to keep things interesting. The oscillator sticks to the square or sawtooth waveforms (created by the vacuum tube itself), but adds a sub-oscillator one octave below which can be mixed in according to taste. Additionally, the sub-oscillator has its own saturation control, which adds vacuum tube harmonics to the low end. I did find that there wasn't as much tonal difference between the square and sawtooth waveforms as you would find on a TB-303. In fact, at certain settings it is difficult to detect any difference in the timbre at all. The square waveform seems to lack the deep hollow nature of a typical square waveform, which is a shame as it is my favourite of the two.

The filter is a transistor ladder low-pass design, which would make it 'the' 303 filter. I can confirm that it sounds spot on. The filter cutoff knob, the largest control on the front panel, and rightly so, feels super smooth. Plus, it had just enough space around it to prevent accidental nudging of neighbouring controls. Twiddling the filter's frequency whilst a pattern repeats is every bit as satisfying as it should be and pushing the resonance up rewards you with the squelchy, occasionally shrieking peaks which cause dance floors everywhere to spontaneously combust.

Beyond the frenetic wrist action, the envelope provides the filter with its main source of modulation. Whereas the original 303 provided only a decay stage, the Nubass adds an attack and (optional) sustain phase, which can be used to push the Nubass where other acid boxes cannot go. I enjoyed programming sequences with glide enabled on several successive notes and setting long attack and decay times, which caused the filter to climb up and down during the long note. It's amazing how small features like this can make such a big difference to a well-known acid pattern.

In addition to the envelope, there is also an LFO which can be used to modulate any combination of filter frequency, oscillator pitch or amplitude level. Triangle and square waveforms are available and there is a global amount which affects your choice of the three destinations. It would have been nice to be able to apply a different amount to the three, but instead they are simply on or off at the global amount. The LFO can either be free-running or sync'ed to tempo. With tempo sync enabled, the speed control becomes a tempo division selector and the phase of the waveform is reset with every note. When free-running at slow to medium speeds, the triangle waveform is useful for undulating filter modulation, but I couldn't find a great deal of use for the square waveform. However, with tempo sync the square waveform is much more useful. Having an LFO on an acid machine adds a novel twist. With some settings you can even create a kind of dubstep wobble acid, although this should probably be filed under 'crossing the beams'.

For the sound generation side, that's about it, except that Korg have included a nice overdrive circuit to beef up the sound. This occurs post-filter and you can adjust the amount and tone of the overdrive. It isn't a full distortion circuit, so it won't replace the classic distortion pedals used by hard acid-techno aficionados, but it does certainly add weight to the bassline and the tone control is useful for crude EQ'ing.

As important as the synth part of an acid sound is, the sequencer is also a critical element. Korg have always included great sequencers in the Volca range, and the Nubass is no different. Anyone who has programmed a Roland TB-303 will probably agree that the sequencer is not the easiest or most enjoyable programming experience, at least by modern standards. For example, having to stop the sequencer playing in order to change notes, or insert new ones, feels like an irritation we shouldn't have to put up with in 2020. Yet many 303-inspired acid boxes replicate the foibles of the original sequencer, perhaps in the belief that the interface makes the sound. I'm happy to report however that the Nubass sequencer provides everything you need for a convincing acid sequence whilst being a joy to program (and without ever needing to stop the sequencer). 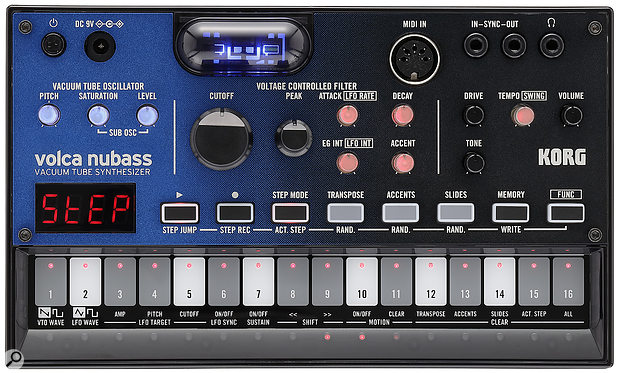 The 16 touch-sensitive keys are used for sequencing. Patterns are 16 steps long and 16 patterns can be saved and recalled using the appropriate Function buttons. Each step of a pattern can hold information about pitch, octave transpose, accent and slide. Additionally, most synthesis parameters can be recorded with Motion Sequencing. Patterns can be recorded live via the touch-sensitive keyboard or incoming MIDI. Alternatively they can be step programmed one note at a time.

In essence, everything required to write convincing acid patterns is there. The all-important slide is spot on to my ears. So is the variable accent, which adds a convincing 'whaow' to accented notes. As on the original 303, you can also alter the octave of each step. Combining slides, accents and octave shifts is what makes acid patterns sound the way they do. But it wouldn't be a Volca if there weren't a few juicy extras. For example, you can randomise slides, accents or octave transpose using the Function buttons, which is a great way to come up with variations. You can remove specific steps from the sequence using the Active Step function. During playback, you can repeat specific notes using the Step Jump function, and you can also chain patterns to create meta-patterns which are longer than 16 steps.

The Nubass sounds fantastic. The sound is liquidity itself, and whilst it may not nail the exact TB-303 sound, it does offer a very pleasing version. The filter has the right kind of sharp tearing resonance. The oscillators sound fat and round, and the sequencer bends, slides and glides in all the right places. If forced to find differences in sound, I would argue that the Volca Nubass sounds a little more woolly and perhaps less sharp than a TB-303. It almost sounds like a 303 that's been recorded to tape. Such comparisons are dangerous, however. What comes out of the Nubass is unequivocally acid. There will be differences and Korg know this and have embraced it. It is not a clone. The vacuum tube imparts a certain vintage smearing to the sound, and whether you are attracted to that is purely personal. I very much enjoyed it.

Korg have succeeded in creating an acid machine with plenty of charm. It has enough extras to add interest without losing focus. For me, its greatest achievement is that the sequencer is easy and fun to use, not something you can say about many acid boxes. If you are hoping to sequence the Nubass using an external sequencer, however, you might be disappointed (see the 'MIDI Spec' box). It may not look like a 303 and as a result many people will overlook it in their search for the ideal acid box. That would be a mistake, because it sounds superb and is nothing but fun to use. It's not perfect, but that won't stop it making lots of friends, especially amongst Volca fans.

The world certainly isn't short of machines capable of a good acid bassline. At the price of a Volca, however, the list is considerably shorter. Behringer recently announced their TD-3, which looks to be a proper 303 clone with a few tasty additions like modular CV connections and poly-chain, and at a price that's even lower than the Nubass. If you can save a little more money, the Boutique TB-03 is Roland's own offering (reviewed in June 2017 by Paul Nagle) and the Cyclone Analogic TT-303 (reviewed in May 2017, also by Paul Nagle) is worth a look.

The Nubass can be played like a normal synthesizer via the MIDI In port. It responds to legato notes with a slide, as you would hope. Sadly, though, Korg don't seem to have included any way to trigger an accent via MIDI. This could have been achieved using MIDI velocity, which is currently ignored. It's a shame because it means you can't fully emulate 303 patterns unless you use the internal sequencer.

MIDI channel can be chosen on power-up by holding down the MEMORY button, and most of the important front panel controls can be automated via MIDI control changes.

It would have been nice to be able to switch patterns using Program Changes, but alas this isn't possible either. Overall, I think the MIDI specification for the Nubass covers the basics, but it will fall short for anyone hoping to control it from an external sequencer.

Once again, Korg deliver undeniable value for money. The Volca Nubass is an acid bassline factory with its own take on the classic sound. Add in some fun extras like vacuum tubes, sub-oscillator, LFO and the sequencer randomisation, and you have a unique box of acidic bliss.