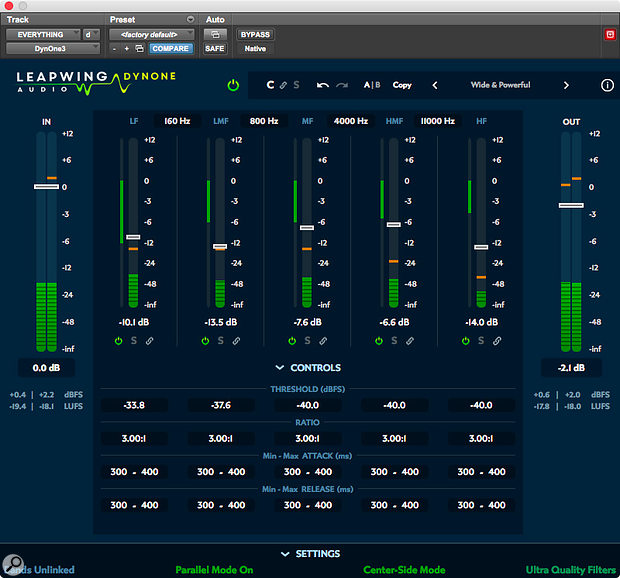 Is this unassuming plug-in a great leap forward in mastering compression?

Leapwing Audio have built a business out of developing tools that perform familiar tasks in innovative ways. Their CenterOne and StageOne plug-ins bring fresh thinking to common problems that afflict stereo files, such as a lack of width or an over-prominent phantom centre. Both enable issues to be resolved and mixes enhanced in a very transparent, mono-compatible fashion, making it easy to achieve results that would be impossible or heavily compromised with more conventional stereo width processors.

With DynOne, they've turned their attention to dynamics processing, again with mastering being the primary application. DynOne is, at root, a five-band compressor/expander, but as you'd expect from Leapwing, it has some distinctive features of its own. Perhaps the two most significant of these are, firstly, that it's intended primarily for use as a parallel processor, and second, that it employs what Leapwing call 'adaptive' attack and release times. What this means in practice is that instead of setting a single attack and release time, or clicking a button labelled Auto, you set minimum and maximum values in each case. DynOne then intelligently adjusts the time constants within the boundaries you specify.

DynOne is available in all the usual native formats, and is authorised using a serial number and a unique identifier for your computer. Its graphical interface is clear and smart-looking, but notably devoid of any sort of FFT or other graphical display of frequency content. All the parameters are adjusted either using sliders or numerical fields, which respond to clicking and dragging in a swift and predictable fashion, but it's not as user-friendly or as fast to set up as a plug-in like FabFilter's Pro-MB, where you can drag the bands and their parameters around within a graphical display. There is some visual feedback, courtesy of individual level and gain-reduction meters for each band, but it would be nice if, for example, the position of each band's threshold was also indicated graphically.

By default, DynOne just displays the core parameters, which include gain, on/off, solo and link options for each band, crossover frequencies — which, as of the new version 3, can now be adjusted — and global band-linking and filter quality settings. The plug-in can also be switched between conventional L-R stereo and what Leapwing call Center-Sides mode, which is not the same as conventional Mid-Sides, and Parallel Mode can be switched on or off. If you want to adjust the threshold, ratio, attack and release times for each band, you need to open up the Controls pane. With two values to set for each time constant, this offers a total of 30 rather small numbers that all need to be clicked and dragged if you want to fully customise a setting (these can at least be linked if you want to adjust them all together). It also makes visible a further Settings pane which has a number of global controls including the extent to which compression in stereo channels is linked, the degree to which gain reduction should be triggered by peak or RMS level, the slope of the crossover filters and so on.

Send In The Paras

One of the reasons why parallel compression can be confusing is that every plug-in manufacturer seems to have a different idea about how the balance between the compressed and dry signals should be set up. Some offer a wet/dry mix control, while others provide separate level controls for the two elements, and there are many further complications relating to whether make-up and input gain controls should affect only the processed signal, and how any automatic gain-matching should be configured. Leapwing's approach is one I haven't encountered before. What seems to happen is that following the In level control, the input signal is split into two paths. One of these is routed directly to the Out level control, whlie the other is fed into the compressor. The Parallel Mode switch simply mutes or unmutes the first of these two signal paths.

The Settings pane includes the obscure but useful Global Band Trim control, among others.

This structure has a couple of unusual consequences. One is that although each compressor band has a gain slider that can be used to increase the amount of compressed signal that's passed to the output, turning down the amount of dry signal in Parallel Mode also turns down the input to the compressor; if you want a setup that blends a lot of compressed audio with a small amount of dry signal, you'll need to hunt down the rather obscure Global Band Trim control. The other consequence is that with the gain sliders at unity, DynOne is always louder with Parallel Mode on than it is in bypass; and bypass, in turn, is usually louder than the output with Parallel Mode off. It can be quite hard to hear what any individual parameter change is doing in Parallel Mode, so the obvious thing to do is to turn it off while you're adjusting compression parameters — but each time you do this, you'll need to crank up the output level to compensate. Some sort of automated gain compensation feature would be very useful, though this is always hard to implement with any degree of precision.

All in all, then, setting up DynOne completely from scratch can be a bit of a chore, thanks to the large number of compression parameters, the lack of visual feedback and the unavoidable level changes when Parallel Mode is switched on and off. This is evident in the factory presets, nearly all of which use the default attack and release times, and very often the default ratio and crossover settings too. It's a shame, because it would be helpful to have some more tailored options to use as jumping-off points for your own settings. There are, for example, almost no presets that use progressively faster time constants for the higher frequency bands, as is often recommended in other multiband compressors. What can also be frustrating is that L-R and C-S modes have entirely separate sets of compression parameters, and there's no way of copying these from one to the other, so if you want to hear how your L-R setup sounds in C-S mode, you'll have to manually recreate it parameter by parameter.

DynOne certainly doesn't call attention to itself or make material sound noticeably compressed, but what it does do is introduce a welcome liveliness and motion to the sound, as well as bringing up ambience and low-level detail.

In practice, then, I suspect most people will tend to leave the detailed compression parameters alone and just use the five main sliders to control the tone of the compressed signal. And, thankfully, this usually sounds very good! What's distinctive about the default compression parameters is that they are very slow, with the attack and release times both herded into the 300-400 ms range. Combined with the high level of programme-dependence and the transparency of Leapwing's filters, this gives DynOne a characteristic sound which can be very seductive. It's nothing like the clichéd parallel compression effect where you brutalise the signal with fast attack and release times at a high ratio, then feed a bit of the dry sound back in to restore a semblance of normality.

Celebrity mastering engineer Bob Katz, who contributed some presets, is quoted as calling DynOne 'invisible', but I'm not sure that quite sums up my own feelings about it. DynOne certainly doesn't call attention to itself or make material sound noticeably compressed, but what it does do is introduce a welcome liveliness and motion to the sound, as well as bringing up ambience and low-level detail. It also tends to alter the tonality somewhat, even when used 'flat': on rock mixes, for instance, an apparently neutral setting tends to foreground the mid-range, in a way that can be either punchy or slightly boxy depending on how the mix sounded to start with. The band level and cutoff frequency controls make it easy to reshape this tonal contribution the way you want it, though.

One DynOne feature that's completely unique is its Center-Sides mode, which I presume uses the technology behind CenterOne to isolate the phantom centre for treatment independently of panned material. This works really well, being both more stable and better at preserving the mix balance than conventional M-S compression. In other respects, DynOne is perhaps less groundbreaking in principle than Leapwing's other plug-ins, and the rest of what it does could probably be approximated in other multiband compressors. However, that doesn't lessen either its usefulness or its distinctiveness, because what sets it apart is its default settings. DynOne's interface and control set are configured in such a way that they naturally push you into its comfort zone, where slow, highly programme-dependent compression is blended subtly back into the dry signal. If you like being in that comfort zone — and it is indeed very comfortable — you'll find the controls make it very easy to modify its subtle contribution in appropriately subtle ways. If you prefer using multiband processing in a completely different fashion, you might have to work harder to get DynOne to do what you want, but it's undoubtedly a tool that has something to contribute to almost any mix.

DynOne is an interestingly different multiband compressor that can bring a subtle but welcome lift to most material.