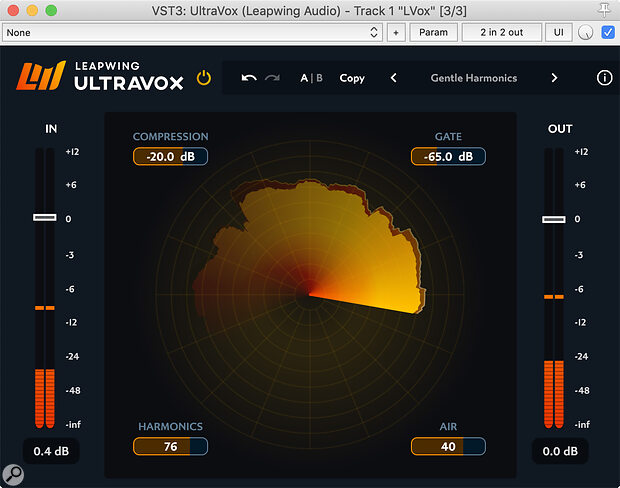 This one‑stop‑shop plug‑in can polish your vocals with a minimum of fuss.

UltraVox is one of those plug‑ins whose slick and simple GUI disguises the fact that there’s some more sophisticated goings‑on behind the scenes. The general idea seems to be that it can replace most of the processors in a vocal chain — gating, compression, EQ and saturation — so you can quickly massage a vocal sound to work with a mix or backing track.

The resizeable GUI is beautifully streamlined. A RADAR‑style level plot in the centre dominates proceedings, displaying input and output levels in two different colours to indicate gain reduction. There are separate input/output bar‑graph level meters either side, each with a gain control. That leaves just four main parameters for you to adjust, each given a horizontal fader: Compression, Gate, Air and Harmonics. You can slide these horizontally with your mouse cursor or type the value in, though there doesn’t seem to be a modifier key to return you to the default setting with a single click.

Compression, in the top‑left corner, is effectively a threshold control: drag it down, and as more signal exceeds the threshold more gain reduction is applied, as indicated on the main RADAR plot. The other settings are taken care of behind the scenes: a gentle ratio and smooth knee, as befits all‑purpose vocal compression, and a program‑dependent shortish attack and more relaxed release. Makeup gain is applied automatically. All in all, then, what we have here is a clean‑sounding ‘one‑knob’ compressor that’s been fine‑tuned for vocals. It works well for reining in overly dynamic performances.

The other three parameters sit in the remaining corners of the display. Moving clockwise, you first encounter the Gate, again with automatic time constants, and its threshold can be set between full scale (0dBFS) and minus infinity (off), so there’s plenty of scope here to fine‑tune it to filter out low‑level noises, spill from instruments and breaths between words. Next comes Air, a cut/boost HF EQ band that’s fixed post the compressor in the signal chain. With this you can apply up to about ±10dB of gain: the cut is a shelf and the boost a bell shape, centred around 12kHz so as to bring up the ‘air’ band without unhelpfully emphasising sibilance. Finally, there’s Harmonics, which adds distortion — both odd‑ and even‑order harmonics — to thicken the sound and/or make it a touch more exciting. The balance of these harmonics is fixed, so the fader can be thought of as a parallel saturation level control. The effect is pretty subtle, but definitely audible and tastefully judged.

Other than that, you have a preset system and an A/B compare function — both of which I’ve explored but neither of which I’ve ever felt the remotest need to use, since it’s just as quick to set the four main controls to taste.

...nudging a vocal where it needs to go to work with a mix is gratifyingly swift.

It’s not an especially complex plug‑in by Leapwing’s standards, but neither is it one of their priciest options. I tried it with a variety of vocal parts, both male and female, lead parts and stacked backing vocals, sung and spoken‑word, raw and pre‑processed. It always sounded nice, and it was often bloody handy having these key controls in a single place; it all just works and nudging a vocal where it needs to go to work with a mix is gratifyingly swift. Moreover, I found it very difficult to get a bad result out of it.

UltraVox won’t do every job that needs doing for every vocal: you’ll still want a good recording to start with, and to take care of corrective EQ, de‑essing and so on; and it’s not going to replace your favourite analogue‑modelling channel strip. But if you want a quick, easy and effective way to apply some polish to your vocals, fit them to a beat, or bring spoken‑word podcasts under control, this plug‑in does just that.

A smooth‑sounding vocal processor that can deliver decent results in no time.