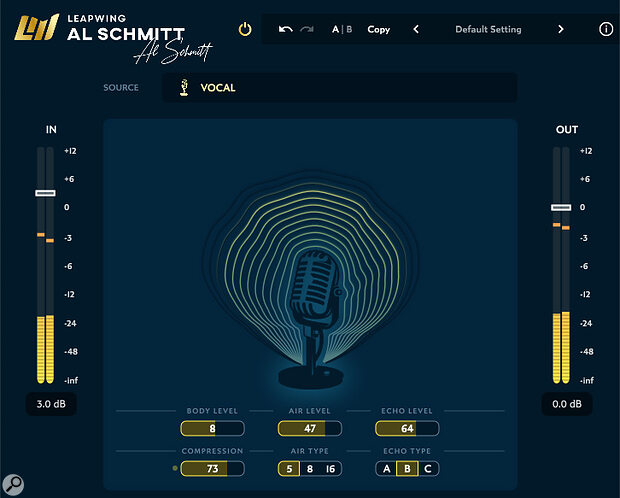 The Vocal profile provides a combination of EQ, compression and echo (actually it’s reverb, but Al apparently refers to it as echo, because he so often uses physical ‘echo chambers’ to create it).

Can Leapwing’s latest plug‑in really sprinkle some Al Schmitt magic on your recordings?

The latest addition to Leapwing Audio’s compact but high‑quality range of processors is their first ‘signature’ plug‑in, and the signature in question is that of recording and mixing legend Al Schmitt. Al may now be in his 90s but he remains very active and his credit list is second‑to‑none — so much so that it’s really not even worth me attempting to pick out any highlights here; if you’re unfamiliar with his work, you really should read up on his career!

What is worth pointing out here is that Al Schmitt is renowned for an approach that starts with high‑quality audio sources and a mixing style where the processing is deliberately kept subtle, simply enhancing already great recordings to make them the best they can be.

For the plug‑in Leapwing have focused largely on Al’s approach to reverb, compression, EQ and saturation, and beneath the hood, there are no doubt some very sophisticated algorithms at play. But rather than simply provide virtual recreations of the control sets found in some of Al’s favourite classic analogue gear, Leapwing have deliberately opted for a minimalist approach to the GUI design (shown above), reducing the control set to a few key components, both to make it easy to use and to help the user avoid the pitfalls that often come with complex control sets.

That control set is used for six distinct ‘profiles’, each designed with a different instrument in mind: vocal, piano, bass, brass, strings and mix. Each offers its own set of controls, focussed on the key elements that Al might adjust in order to enhance that instrument within the context of a mix.

For example, the Vocal profile provides a combination of EQ, compression and echo (actually it’s reverb, but Al apparently refers to it as echo, because he so often uses physical ‘echo chambers’ to create it). Body Level provides a broad cut/boost below 1kHz, while the Air Level can cut/boost at three centre frequencies (5, 8 or 16 kHz). However, Leapwing are keen to stress that these EQ bands can interact with each other, behave in a non‑linear fashion, and apply relatively modest, broad, changes. Fast attack/relaxed release compression offers a single control that influences both the ratio and the threshold. Three different echo (reverb) types are also available. The documentation doesn’t specify what these emulate, but Al Schmitt has made extensive use of the iconic echo chambers at Capitol Studios in LA so I think we can hazard a safe guess. The Vocal profile also offers smooth saturation, the nature/degree of which depends on how you set the Input level.

In contrast, the Strings profile provides very little saturation no matter how you set the Input level. This profile has just three echo types and echo level controls. The Piano profile features similar echo controls and compression, although it’s worth noting that these are not necessarily the same echo/compression options found in other profiles; in each case, the equipment combinations being emulated under the hood are chosen specifically for the instrument in question.

The profile which has the most extensive control set is Mix, and this is obviously intended to be used on your main stereo bus. With a very clean signal path (no saturation), it combines EQ with three‑band compression. The Sub Boost provides up to 5dB of boost centred at 25Hz, while the Air Boost adds gentle gain above 3kHz. The three single‑control compressors are split at 500Hz and 5kHz, respectively, and feature gentle ratios of up to 2:1. The three gain controls provide make‑up gain for each compression band but can, of course, be used to adjust the overall tonal balance. 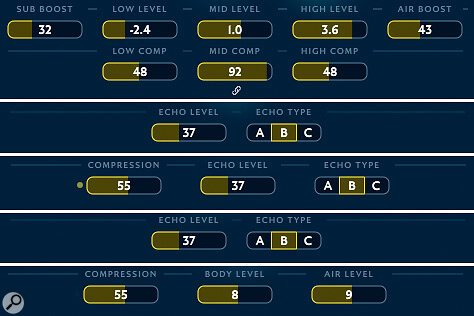 Input and output gain aside, this composite image shows the compact control sets for a number of profiles. From top to bottom: Mix, Brass, Piano, Strings and Bass. (The vocal profile is shown in the first pic).

I have to admit that the control‑freak tweaker within me was a little underwhelmed by first appearances, given the apparent lack of control and the mysterious nature of what might be going on under the hood. But the more I experimented with this plug‑in, the more I began to appreciate just how well Leapwing’s design fits with Al Schmitt’s approach. It’s not a ‘corrective’ processor, with which you can attempt to rescue a problematic sound through processing — because that’s not what Al Schmitt does. Rather, he takes beautifully recorded audio and then attempts to make those great sounds greater still, and that’s exactly what this plug‑in is all about. Once you approach its operation with that philosophy in mind, it all begins to make a lot more sense.

The more I experimented with this plug‑in, the more I began to appreciate just how well Leapwing’s design fits with Al Schmitt’s approach.

Equally, though, the minimalistic design means that almost anyone will find it easy to use. Indeed, I found that it is actually very difficult to ruin a perfectly good sound with this plug‑in, but very easy to gently enhance it. There’s a parallel here with some classic hardware processors (and their software emulations) such as the LA2A compressor: you pick it because it is the right tool for a specific task and, with essentially two controls, it’s then very difficult to get it wrong.

I felt this was particularly obvious with the Vocal and Mix profiles. The former (which could easily be used on other ‘lead’ instruments) allowed just enough control to enhance the tonal character of a well‑recorded vocal, apply some gentle dynamics control, add a hint of saturation if required and then sit it in a choice of three beautiful (and beautifully subtle) reverbs. Applied on your stereo mix, the Mix profile gives you just enough control over both EQ and dynamics processing but it also helps you avoid pushing things too far. In short, this could be used as a tool for conventional (ie. subtle) mastering duties, where the aim is to gently and carefully achieve the required loudness, dynamics and tonal balance, and it works beautifully on an already great mix. Incidentally, I found that the Mix profile also worked pretty well on a drum bus.

This is not necessarily a plug‑in for every occasion or for every person but there’s a 30‑day, fully functional trial, should you want to test the water before parting with your cash. If you are an EQ and compression control‑freak, and like to see exactly what each of those knobs, switches and faders are doing to your audio, you might not get on with the minimalist control set. If you have poor recordings that need rescuing more than mixing, it won’t offer solutions. And I suspect those working in more hardcore musical genres, such as EDM or metal, might feel that the processing is just too subtle for their needs.

But if you place an emphasis on capturing your own great sound at source or are fortunate enough to mix other people’s well‑recorded audio, and the audiophile nature of the final mix is critically important to you, then the Al Schmitt Signature Plug‑in could be right up your street. Once you let yourself accept that the very carefully chosen control set is all you really need, it really is possible to apply a little bit of Al Schmitt’s signature sound with a minimum of fuss.

The Al Schmitt Signature Plug‑in is both interesting and intriguing. For well‑recorded sound sources, this is an almost infallible way of making something that sounds good sound even better.