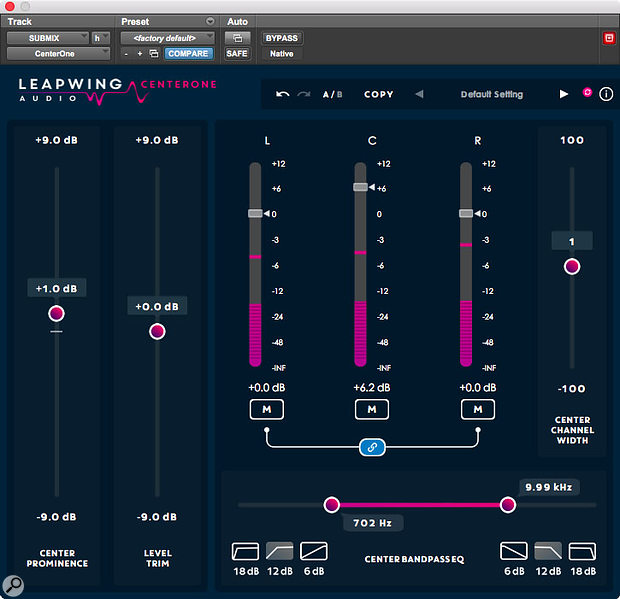 Version 1 of Leapwing Audio’s CenterOne, reviewed in SOS October 2017, used advanced DSP to offer an innovative alternative to traditional Middle and Sides-based stereo manipulation. It provided two basic functions: the ability to independently rebalance the levels of the left, centre and right elements within a stereo signal, and the extraction of the centre component as a separate signal.

These remain the core features in the new version 2, but both aspects have been significantly enhanced and made more versatile. They’ve also been more clearly separated in the plug-in GUI, with the Center Prominence slider promoted to a panel of its own at the left of the interface. Its range now spans ±9dB rather than the previous ±6, and it’s joined by a global Level Trim control with the same range, allowing you to easily A/B your chosen settings without unwanted volume increases or decreases. Leapwing have also added their own preset management system, making it possible for CenterOne presets to be saved in one DAW and recalled in another.

Centre extraction has also blossomed in scope, thanks to the addition of a new Center Width control. The effect of this is easier to hear than it is to describe, but in essence, it varies what is counted as belonging to the ‘centre’ by the algorithm. Unlike the signal you get by soloing the Middle component of a stereo signal, or summing the left and right channels, Leapwing’s extracted centre channel corresponds closely with what we perceive as being central within a mix. As you drag the Center Width control up and down, this psychoacoustic ‘window’ opens or closes; so if, for example, your mix incorporates a mono signal panned 30-percent left, it’ll be the setting of the Center Width control that determines whether this appears in the left or the centre channel of CenterOne’s output.

Center Width adds several new dimensions to CenterOne. Obviously, it makes a huge difference when you’re extracting a solo centre signal either for remixing or to feed a centre speaker in a 5.1 system; the results are rarely completely free of artifacts, but are certainly usable in context. For mixing and mastering, however, I think the killer feature is the ability to rebalance the ‘middle’ and ‘sides’ elements in ways that are very different from conventional M-S processing, and which correspond much more closely to our perceptions of where sources are panned within a mix. The Center Prominence control almost invisibly pulls the phantom centre up or down, while the centre extraction section lets you precisely ‘cut out’ the central part of the mix — within a specific frequency range, if you so desire — and then exaggerate or subdue it. For example, if you feel that a lead vocal is both too loud and too dry within a mix, a narrow Center Width setting will allow you to push the dry signal back without affecting much of its stereo reverb. It’s this sort of capability that makes CenterOne an extremely powerful corrective tool, with no obvious rivals.