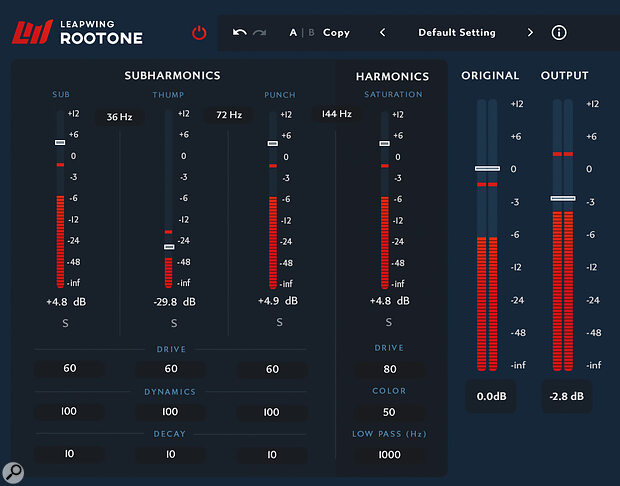 RootOne refreshes the parts most other enhancers cannot reach.

I was a little late in discovering Leapwing Audio, but when I eventually stumbled upon their DynOne plug‑in a couple of years ago I loved it. I have been an avid user of their plug‑ins ever since, and I particularly like that they invent new types and implementations of audio processing, rather than delivering yet more analogue emulations. So when I read about their new RootOne, a bass‑enhancement plug‑in for Mac and Windows in VST, VST3, AU (Mac‑only) and native AAX formats, I was excited, and couldn’t wait to try it out. The world isn’t exactly short of bass enhancers and sub synths (check out the 'Alternatives' box for some examples) but, as I’ll explain, RootOne does things a little differently, and the results are impressive.

RootOne’s processing is divided into two sections: Subharmonics and Harmonics, and the Subharmonics are divided into three frequency bands called Sub, Thump and Punch. These three bands have adjustable crossover frequencies: Sub up to 56Hz, Thump up to 104Hz and Punch up to 196Hz (their default positions are 34, 72 and 112 Hz, respectively). All three bands have identical controls: the fader sets the amount of added subharmonics; the Drive parameter sends the subharmonics to a separate saturation process; Dynamics controls the dynamic range of the subharmonics; and Decay can prolong their decay.

The Harmonics section is a saturation processor, which adds harmonics (based on the subharmonics) to enhance the character of the processed sound. The Drive setting adjusts the amount of generated distortion, Color sets the degree of symmetry (or asymmetry!) of the distortion, and Low Pass applies a low‑pass filter, whose turnover frequency can be set anywhere between 100Hz and 1kHz. The contribution of each frequency band can be heard in solo, as well as visually confirmed by looking at the level meters, and given how potent the process is, I strongly recommend that you do spend time listening in solo while tweaking each band.

So far, it sounds useful if perhaps also rather conventional, but there’s rather more to Leapwing’s process, which took them two years to develop. RootOne continuously analyses the source material to determine the frequency, phase and level of the root tones (fundamental bass notes). The Sub, Thump and Punch frequency bands react to these root tones roughly an octave above and, together, the bands generate a couple of subharmonics that are perfectly in phase with the root tone.

Where a source lacks low end, instead of adding subharmonics it’s sometimes useful to add ‘body’ higher up in the bass region. RootOne’s saturation process is great for that: it adds harmonics based on the new subharmonics, and the cool thing is that you don’t have to add the subharmonics themselves; you just set the crossover frequencies accordingly.

Running some test tones through RootOne made it easy to see how RootOne adds both subharmonics and harmonics. Tweaking the individual Drive parameters along with the Drive and Color parameters of the Harmonics section also made me realise that they all interact with each other — that’s probably a reason why this plug‑in seems to perform so well. Incidentally, while experimenting, I also tried sending pink noise into RootOne and, without playing back the noise itself, RootOne produces a low‑end rumble that would be perfect as a spaceship background noise in a science‑fiction movie!

It was very effective in adding weight and punch to both electronic and acoustic kick drums, and with the latter it pretty much gave me the sensation of raising the fader of a pressure‑zone mic positioned inside the drum...

Test tones can only tell you so much, though, and I’m sure you want to know how it performs on ‘real‑world’ sources. During the review period, I used RootOne on a variety of different sound sources, ranging from kick drums and bass lines, to tiger roars and a thin‑sounding rock track from the early ’90s. It was very effective in adding weight and punch to both electronic and acoustic kick drums, and with the latter it pretty much gave me the sensation of raising the fader of a pressure‑zone mic positioned inside the drum, but without the spill sound from the snare drum. Perfect! With an electronic kick that lacks low‑end, the remedy has often been to layer it with another, more sub‑heavy kick. It’s an intricate process that can change the overall ‘sound’ of the kick drum, and it has the potential to create thorny phase‑cancellation problems in the low‑end too. Using RootOne instead, I was able to add phase‑coherent subharmonics not only to electronic kick drums but also to two club mixes, making them sound more interesting and ‘alive’ — a result that had me dancing around in the control room!

In fact, RootOne seemed able to do something interesting for pretty much any sound source and instrument that I was processing: bass lines, synths, snare drums, percussion, voice‑overs... The list goes on. For example, I mocked up an intro track for the local ice hockey team and it was great fun hearing the tiger roars thunder in the PA‑system, thanks to their guttural low‑end. Even my efforts with challenging sources met with some success: tackling a thin‑sounding rock track is always tricky, especially when there is nothing more than a stereo track to work on but, while RootOne had to work hard to find the root tone of both the bass line and the kick drum and the result wasn’t perfect, it definitely sounded better than the thin‑sounding original master.

So both the capability and the sound of this plug‑in are good — and having used RootOne for some time now, I reckon the control set is too. The GUI is clean and easy to read, and the controls are easy to use and intuitive: lowering the Dynamics parameter makes the added subharmonics more even in level, and adding Decay makes them more prominent.

RootOne seemed able to do something interesting for pretty much any sound source and instrument that I was processing.

Processing low‑end is tricky because the sensation of an increased low‑end is seductive, especially in the lowest octave. The TAD speakers and Velodyne subwoofer in my control room are phase‑calibrated by a Trinnov processor and have a linear frequency response down to 20Hz. This system very accurately responded to the subharmonics generated by RootOne, in an inspiring way, so I was able to tailor the bass response to taste. If listening over a less accurate system, though, or one with more limited low‑end capabilities, you should make an extra effort to monitor the result of RootOne very closely, preferably on several sound systems and on headphones too. Raising the Sub fader means adding a sub synth playing bass tones in the 15 to 40 Hz area, and that might not be audible on a pair of small nearfield monitors or in a poorly treated space, and it’s easy to overdo the effect.

RootOne is a new landmark when it comes to bass enhancement and sets a high bar for the competition. I highly recommend downloading the 30‑day demo version of the plug‑in — just be prepared to part with some money when you fall in love with it!

The most obvious alternatives are Waves LoAir, MaxxBass, and Brainworks bx_subsynth. All three are useful, especially for their distinctive sound, but they are not as flexible or ‘intelligent’ as RootOne, and don’t provide phase‑aligned subharmonics and harmonics.

Combining phase‑aligned subharmonics and harmonics in a very musical and intelligent way, Leapwing RootOne sets new standards in bass enhancement. No matter how thin‑sounding the source is, the chances are that this plug‑in will make something interesting out of it.