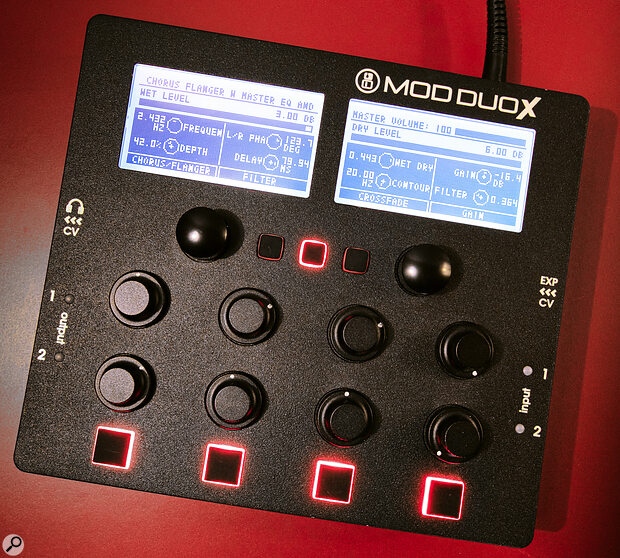 Now you can rock the MOD on your desktop!

Back in November 2017, Paul White reviewed the MOD Duo, a guitar stompbox that hosts software plug‑ins that you can arrange as virtual ‘pedalboards’. A key feature is the open platform, which allows third‑party developers to release compatible plug‑ins. Over the product’s lifetime, the folks at MOD Devices noticed that more and more people were using the MOD Duo as a desktop device, creating not just guitar effects but also synths, MIDI processors and even CV processors. So they decided to make another version of the MOD Duo, this time aimed at those desktop musicians. The result is the MOD Duo X.

Like its predecessor, the MOD Duo X is a stereo/dual‑mono device that can host open‑source Linux LV2 plug‑ins. Editing is done via a web browser, with the MOD Duo X connected to your computer. The editor gives you a sandbox playground for creating modular pedalboards, as well as assigning the MOD Duo X’s physical buttons and knobs to various parameters. There are hundreds of plug‑ins to choose from and there’s also a large library of user‑made pedalboards. Once you’re done editing, your virtual pedalboards are available on the device itself, to be used completely standalone.

The unit measures 18 x 16 x 4.5 cm and it feels very solid. There are twin mono quarter‑inch audio inputs and outputs (with true bypass circuit) on the right and left sides, along with a headphone output and expression pedal CV input. The rear is home to a 12V power input, Control Chain Ethernet port, USB type‑B socket for connecting to your computer, a USB type‑A port, which allows for hosting USB‑MIDI peripherals, MIDI In and Out DIN connectors and an S/PDIF digital output on eight‑inch jack, which mirrors the analogue outputs.

The rear panel includes MIDI I/O, coaxial S/PDIF out and USB connectivity, as well as an Ethernet socket for MOD’s optional Footswitch.

The Ethernet socket is a proprietary connection for MOD Devices’ Control Chain protocol. You can use it to connect their MOD Footswitch device, which gives you four footswitches that can be configured to do anything. The Footswitch has two LCD screens which show customisable labels for each switch. Control Chain devices can be daisy‑chained so you can add multiple Footswitches or other compatible devices. The software and hardware for the MOD Footswitch and the Control Chain protocol are, of course, open source — so DIYers or other manufacturers can make their own compatible devices.

The Duo X’s two monochrome, backlit LCD screens on the front panel are placed neatly above two groups of knobs and buttons. Because they are LCD and not OLED, they can be a little difficult to see unless you’re directly above them, but they do the job. Their main function is to show you what parameters the knobs are assigned to and their current value. The layout on the screens matches the physical layout, so it’s all very intuitive. There are two large clickable, endless, rotary encoders, eight potentiometers and four backlit on/off buttons, all of which can be assigned to multiple parameters with variable ranges.

Whilst the MOD Duo X comes installed with a variety of ‘pedalboards’ to get you started, I imagine most users will be keen to roll up their sleeves and build their own. Connect to your computer via USB or Bluetooth and enter the device’s IP number into your browser, and you’re presented with the pedalboard editor. All hardware inputs are on the left and all outputs on the right; these include all audio, MIDI and CV connections. Then, it’s as easy as adding a few plug‑ins and connecting them together using virtual cables. Each plug‑in has its own graphical interface and the whole system looks great and feels very slick.

Every plug‑in has an info page with details about its author and its features, and you can even see what pedalboards it has been used in. Plug‑ins are categorised, which helps greatly when there are so many. Not all plug‑ins are installed on the unit by default. The review model we received had around 80 plug‑ins already installed, but following the link to the plug‑in store revealed more than 200 more which could be installed and used. 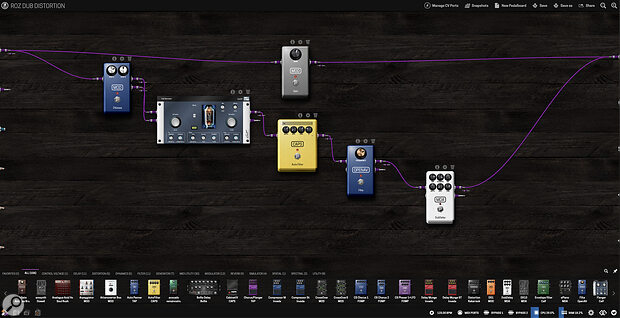 One of the most important aspects of building your own pedalboard is assigning the physical controls. Although the MOD Duo X has 10 knobs and four buttons, there are actually three pages which can be assigned, giving you up to 42 assignable controls per pedalboard — and that’s before you add MIDI, CV or Control Chain assignments. Once you assign more than one page of controls, a single button on the front panel is used to advance to the next page, and the displays update accordingly.

Assigning controls to parameters within the pedalboard is easy. You choose which plug‑in to work with and click the settings cog just above it. This opens up a modal dialogue box in which you can assign any physical device control, MIDI control change, CV input or attached Control Chain device to control that parameter. You can also give the parameter a name which will appear on the LCD screen and select a value range. Additionally, each plug‑in can have presets, and you can assign a control to scroll through those, which is a good way to make more drastic changes. Once you’ve assigned a knob or button to a parameter it is greyed out and unavailable to assign elsewhere. It’s also possible to create macro assignments by enabling the output of a ‘MOD Control to CV’ plug‑in as a mapping source; a single CV signal can be mapped to as many parameters as desired.

Pedalboard sizes are only restricted by CPU and RAM and there are live meters for both at the bottom of the screen, so you can always see where you’re up to. The MOD Duo X is based around a beefy ARM Cortex 64‑bit Hex‑core processor, so there should be plenty of power for most projects. 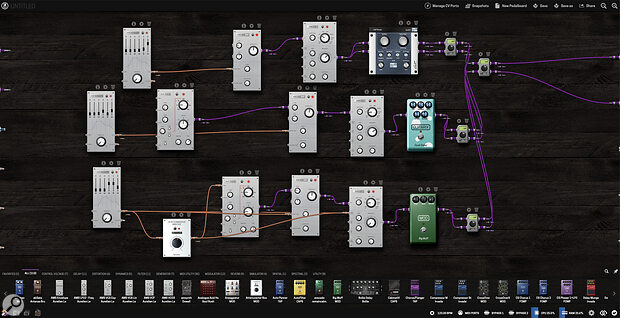 Pedalboards are not just for guitar effects. Here’s a drum machine taken from the pedalboards library.

As soon as a pedalboard is saved, it is stored on the unit along with any plug‑ins needed, and can then be used completely standalone. If you choose to load pedalboards from other users, any plug‑ins not already present will be installed. Pedalboards are organised in banks to help keep things organised and you can browse banks and load pedalboards directly from the unit. You can also use MIDI Program Change or an attached Control Chain Footswitch to switch pedalboards.

At any point whilst performing with a pedalboard, you can save a snapshot. There are two dedicated snapshot buttons on the front panel and you simply long‑press so save a snapshot, and short‑press to reload it. This can be really handy during a performance, as it allows you to return to a specific state quickly.

Being a plug‑in host, the MOD Duo X must also deal with tempo and it does so rather well. You can choose between setting an internal tempo, or sync’ing to MIDI clock or Ableton Link. Tempo (internal), time signature and transport controls can all be assigned to front‑panel controls.

For those that code, one of the MOD Duo X’s biggest selling points will be the ability to make your own plug‑ins. Max/MSP integration is probably the easiest route in. MOD Devices have worked with Max/MSP’s creators Cycling ‘74 to make a Max package that can take code exported with Max/MSP’s gen~ object and compile it to an LV2 plug‑in, ready for use in the MOD Duo X. Several of the library’s plug‑ins were created this way.

Of course, Max/MSP isn’t the only way to code plug‑ins. Higher‑level languages like Pure Data, Faust, C or C++ can also be used to create LV2 plug‑ins. The MOD Devices website, wiki and forums have plenty of information and tutorials on how to go about creating your own plug‑ins.

This is a very well built device and I have no doubt that it would survive the punishments of being gigged.

There are several aspects of the MOD Duo X to consider. Firstly, the unit itself is solidly built and even comes in its own carry case. The knobs feel sturdy, the buttons are nice, and the audio and MIDI connections are all on grown‑up, full‑size sockets. Overall, this is a very well‑built device and I have no doubt that it would survive the punishments of being gigged.

Then there is the computer side of things. MOD Devices have put years of work into their pedalboard editor, platform and plug‑in library, and it shows. The editor is simplicity itself to use. Any reservations I had about working in a browser were quickly batted away by the slick and very good‑looking modular playground; it was a pleasure to use. I never experienced any disconnections, glitches or difficulties — another thumbs up.

Thirdly, there is the standalone operation. Once again, the unit is simple to use and works as intended. All the pedalboards I tried worked great in standalone mode, the system seems rock solid and stable. Being able to decide exactly how the hardware responds to knob‑tweaks means you can build effects and generators that suit your live needs exactly. I wouldn’t hesitate to use it in a live situation. 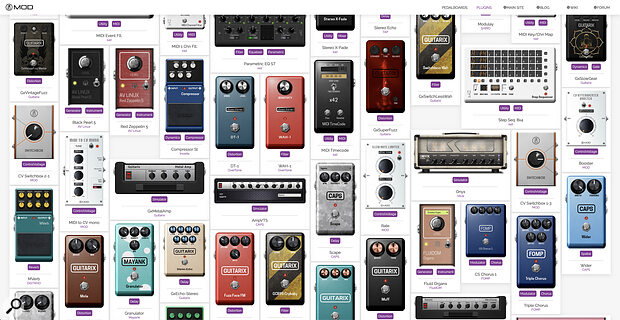 The plug‑in library is home to an impressive array of free plug‑ins.

Finally, there is sound quality. This is much harder to analyse, mainly because it’s so dependant on the plug‑ins you use, and there are hundreds of them. The sheer number available means you can almost always find something that suits your needs. Some plug‑ins are based on quite old open‑source code, like the MDA plug‑ins which have been around for nearly two decades. But there are plenty of new additions to the library from well‑respected developers, and the list is constantly growing. The fact that you can code your own plug‑ins will be a major drawing point for some, and there is an active community on the MOD Devices forums to help you with such endeavours.

The MOD Devices platform is both impressive and stable, and the MOD Duo X really is a worthy flagship device in their range. It’s hard not to be impressed! While hosting software plug‑ins in a hardware box won’t be something that everybody has a need for, for those who do, and particularly for those who create their own plug‑ins or can take advantage of the project’s open‑source status, the MOD Duo X should prove a very compelling package indeed.

If you want to get the Mod Duo X involved with a modular synthesizer or other CV‑hungry device, the expression pedal input and headphone output ports will handle a pair of CVs when used with a stereo splitter cable. CV inputs can be used to control any parameter via the modulation system, but the plug‑in library also contains a good number of plug‑ins that will generate or process CVs including clock generators, switches, MIDI‑to‑CV converters, audio‑to‑CV converters, envelopes, LFOs and more.

The Mod Devices open‑source platform gains a new desktop flagship hosting device, capable of running hundreds of Linux LV2 plug‑ins and arranging them in modular‑style virtual pedalboards for standalone use. It should appeal to anyone who likes to ‘roll their own’.