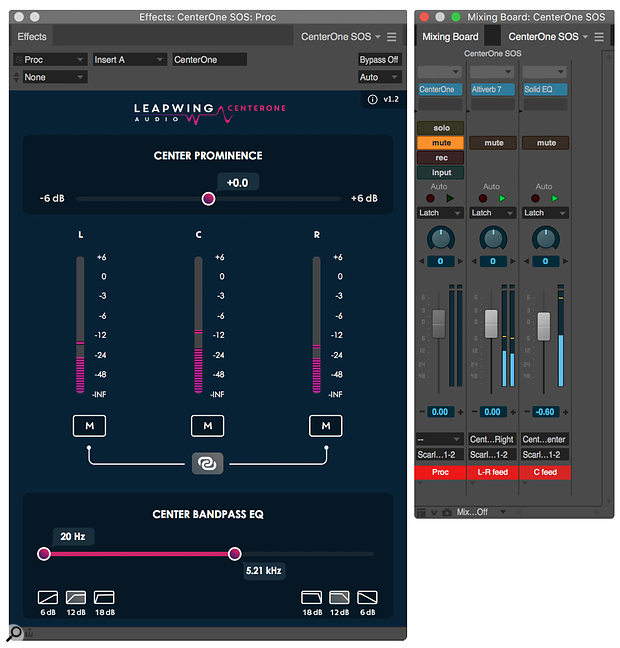 Leapwing Audio are new Belgian plug-in developers with an interesting ethos: “You will not find us creating analogue imitations” is a statement on their web site. In a world where many of us already have more virtual vintage EQs and compressors than we know what to do with, I personally find that quite refreshing.

Leapwing call CenterOne a ‘spatial’ plug-in, and from a cursory glance at the very tidy, high-DPI-friendly interface, you might lump it in with typical middle-and-sides (M-S) stereo processors — of which there are many on the market. However, while it is a stereo tool, it apparently doesn’t use M-S techniques at all, relying instead on sophisticated panning and spatial manipulation algorithms licensed from two French DSP companies. And rather than being some generic stereo toolbox, CenterOne actually has a notably lean and focused feature set.

In its simplest role, applied to a stereo track or channel in your DAW, a 6dB boost or cut of the L/R-correlated ‘phantom centre’ signal can be applied, without modifying overall stereo width or frequency content. This mightn’t sound all that impressive, but it really is! There’s almost nothing else on the market that can do anything similar, and certainly not M-S-based processors. This Center Prominence control behaves like a focus control for typical mixes, sending vocals, soloists and the like forward or back in the soundstage without affecting the bigger picture.

When you need it though, much more is possible thanks to CenterOne’s ability to split a stereo input into left, (phantom) centre and right signals. Suitably patched into a DAW, you’re then free to treat those signals how you like, including boosting or cutting them to a much greater degree — or, indeed, muting them entirely, or running them individually through other plug-ins. An adjustable band-pass filter constrains the frequency content of the virtual centre output, with the remainder going to the sides. Level meters and mutes for these generated L, C and R streams help in setting up the split.

CenterOne is inevitably going to have most appeal to those involved in mastering, restoration and perhaps also remixing. And if that’s you, you can probably already see the tremendous potential on offer here. Apply reverb to the sides, and EQ the centre only, or use the band-pass filter to selectively remove centre-panned vocals without taking out centre-panned bass at the same time.

Perhaps most remarkable of all is the care with which your original signal is handled. Recombine the split plug-in outputs in your DAW, flip their polarity, and a perfect null can be achieved against your original material. That’s another way of saying the channel splits and filtering aren’t interfering with the spectral, phase or dynamic qualities of your material at all. This is some super-impressive DSP.

CenterOne has very few competitors. Other than the diminutive Stereo Imager D by Japanese developers AOM, only Waves’ Center does anything similar. That plug-in offers greater on-board level manipulation, of both Middle and Sides, but isn’t capable of that impressive L/C/R split which makes for so much flexibility here. In my testing, too, it seems Leapwing’s plug-in maintains a wider, more stable and more natural-sounding stereo image when some or all of the centre signal is removed. Both plug-ins are powerful and useful, but it looks like CenterOne has better manners.

I’d advise potential purchasers to take up Leapwing’s free trial offer: setting up the plug-in differs a bit from one DAW to another, and some with unusual pan laws impose a slight level mismatch when recombining the split outputs. It’s nothing serious, and easily compensated for, but you’ll want to know about it. All things considered, CenterOne is hugely impressive. As a first product from a new developer, especially so. It does things that even its few direct competitors can’t equal, and with impeccable fidelity. If you’re serious about stereo processing it’s surely a must-have tool.