If you want a big sound from a small PA, LD’s latest column system might be just the ticket.

Compact line-array format speakers have a lot going for them. They generally deliver clarity in the all-important mid-range, they don’t block sightlines in a crowded small venue, and they have well-controlled dispersion characteristics that help put the sound where you want it. 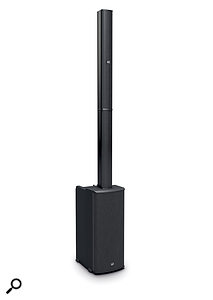 The Maui 11 G2 comprises a two-part aluminium column and a compact ported sub with a built-in mixer. The sub, which houses three 6.5-inch woofers with 1.5-inch voice coils, is built into a robust plywood cabinet, and both the sub and column sections can easily be carried into a gig in one go using the optional custom bags. A carry handle is built into the top of the sub.

Handling the mids and highs are eight three-inch cone drivers plus a pair of one-inch neodymium compression drivers. While the system is compact and light at just 24.9kg, its Class-D amplifier section (all built into the sub) can deliver a total of 500 Watts RMS (1000 Watts of peak power). An on-board DSP is fed from 24-bit, 48kHz converters to provide a three-way crossover, time alignment, compression and a multiband limiter based on LD’s DynX control technology, which aims to keep the sound distortion-free up to high SPLs by deploying a separate limiter for each of the three frequency bands. An integrated four-channel mixer includes system presets for mono or stereo setups (ie. when connecting to a second system), and has Bluetooth capability to allow audio playback from a phone or other Bluetooth device.

Plug-and-play multi-pin connectors link the columns and sub, and the assembled column height is 2030mm. For installation use, an optional mounting kit is available. There’s also the option of a separate stand to hold the column separate from the sub, which may be useful in low-ceiling venues. The lower column section is fitted with four steel locating pins at each end that fit into the sub and into the column above it to add strength and stability. Between these is the multi-pin connector that links the units.

The maximum peak SPL available is 124dB, and the frequency response is quoted as 50Hz to 20kHz, which makes a single system suitable for solo performers, duos and as a mainly vocal system for a band playing smaller venues at modest volumes. A dispersion figure of 120 degrees horizontal and just 20 degrees vertical means the sound has a good ‘throw’ as well as a wide coverage angle, with little energy wasted on the ceiling or floor.

The mixer section is fairly basic and doesn’t include EQ or effects, though you can always patch in a bigger mixer if you need to. On the top of the sub are controls for balancing the sub/top level and for the overall volume, along with status LEDs that indicate power, signal, limiter action, protection, setup configuration and mono/stereo operation. Stereo operation is possible when using two systems; the System button switches between mono and stereo modes. 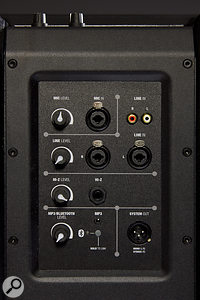 The rear panel of the subwoofer houses an integral four-channel mixer.Of the four mixer channels, two can accept mic or line-level signals on ‘combi’ XLR/jacks (channel two has dual inputs that can be used at the same time), channel three is line only on a quarter-inch jack but with a high impedance to allow it to accept instruments, and the other input is reserved for Bluetooth connection or playback devices with a stereo mini-jack connector (both may be used at the same time, as long as you have an external means of balancing their levels). A Bluetooth pairing button and status LED are sited to the right of the level control. There’s also a stereo RCA phono input feeding into the system, and again, the level has to be controlled at source.

A balanced XLR provides a system output and, in stereo mode, sends all the mono channels, plus the right-hand signal from all the dual-input channels, to a second system. Power comes in on a standard IEC connector with adjacent power switch.

Once assembled, the system is reassuringly stable, and its rugged build inspires confidence. Those steel locating pins protect the connectors from damage should anyone bump into the speakers. Testing with pre-recorded music, the system produced a more musical sound balance than I hear from most affordable 10- or 12-inch box speakers, with a mid-range that seemed detailed and kind to vocals. In a critical comparison with a good studio monitor, the Maui 11 G2 is less refined sounding at the high end, and close up it can sound just a hint brash, but in a typical gig situation it works perfectly well, where the slightly forward voicing helps retain vocal clarity.

I’m also pleased to say that the sub comes over as tight and well-controlled, with the use of three smaller drivers allowing it to be built into a sensibly slim enclosure. Three six-inch drivers have a cone area similar to a single speaker of around 11 inches in diameter, so don’t expect ‘clubbing’ levels of deep bass, but for properly balanced music at pub levels it does a solid job, and the DynX limiting helps to keep it out of trouble. The sound quality doesn’t seem to suffer if the limit LED flashes on peaks, but you do eventually reach a point where the limiter action becomes obvious if you abuse it.

The wide dispersion is a particular advantage in smaller venues, and even when you’re standing just behind the speakers you get a sense of how things sound out front, even without monitors.

The complete Maui 11 G2 package costs no more than many two-way active 12-inch speaker boxes, making it extremely good value. A pair would be ideal for a gigging pub band, though a single system covers a lot of ground and could be a good choice for solo artists, duos and ensembles that employ a cajon player rather than a drummer. The system’s well-balanced sound makes it suitable for keyboards or for music that relies on samples or backing tracks. In fact the only Achilles heel, and one that applies to all systems where the sub houses all the amplifiers, is that should a serious electronic failure occur, it will take out the entire column. That’s why it always pays to have monitors that can be redeployed as an emergency PA when necessary.

Realistically you’d need an external mixer with EQ and effects for more serious use, but the on-board mixer works fine if you just need something simple. Portability and compactness are other benefits for those travelling to gigs in a car rather than a van. With back seats down, you could easily get two systems, a guitar and a guitar amp into a typical hatchback. If you’re on the lookout for an affordable compact line-array style system for use in smaller venues, then one or two Maui 11 G2 systems should be on your must-try list.

Many PA manufacturers have started adding mini line arrays to their catalogues, with HK Audio probably being the most high-profile competitor in the MI music sector.

The Maui 11 G2 is capable of providing full-range coverage with good vocal clarity in smaller venues, and can be teamed up with a second system for stereo operation or where higher SPLs are required.