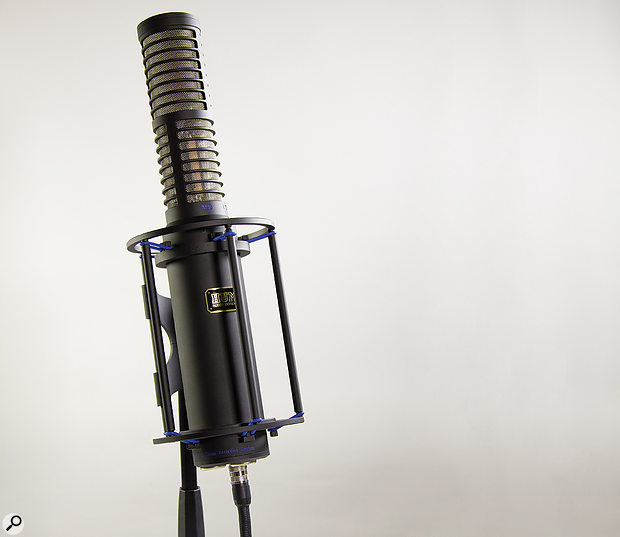 Polish company HUM Audio have set out to make the finest ribbon mic known to humanity. Have they succeeded?

HUM Audio Devices are a new manufacturer based in Poland, and if their first product is anything to go by, they like to do things on the grand scale. A stereo ribbon microphone with built-in active preamplifiers, the RS-2 not only costs more than my car, but also seems about the same size. Mere photos really don’t convey quite how gigantic this thing is: at 42cm long it’s half as big again as an RCA 44, and at 2.2kg, it’s heavy enough that you wouldn’t even think about using it on a standard boom stand.

Moreover, the microphone itself is only part of the package. Most active ribbons I know of work on standard phantom power, and deliver levels roughly comparable to your average capacitor mic. The RS-2 has full-blown mic preamps within, and in consequence, has its own chunky power supply, plus a remote control for setting the gain. The mic mates to the PSU using a heavy-duty cloth-covered cable with rather fiddly screw-in 14-pin connectors. By contrast, the remote and PSU hook up using a standard XLR cable, meaning that the remote can be set up in the control room and patched through to a live room if needs be; again, HUM supply a custom cable with attractive braided covering. Audio output is extracted through another pair of standard XLR sockets on the base of the mic.

The net effect of all this is very imposing, but means that the RS-2 is a bit of a faff to set up. This really isn’t the sort of mic you can just throw up for a quick overdub: it takes quite a while to get all the different components out of the flightcase and connect them together, and you absolutely need a large counterweighted mic stand. (In fact, if you’re thinking of placing it above a performer, a quick check on your liability insurance wouldn’t go amiss. There would be only one winner in a collision between the RS-2 and a drummer’s head.) Having said that, the RS-2 will work as a purely passive mic if the PSU isn’t connected, which might save time in some circumstances.

Though it is probably responsible for the RS-2’s gargantuan dimensions, the thinking behind placing the mic preamps in the body of the mic itself is sound, minimising the distance between mic element and preamp. This is part of a general audiophile mindset on display in the design of the mic: Lundahl transformers are used throughout, the fancy cables are custom-made, and HUM proudly state that there are no electrolytic capacitors in the signal path.

The mic’s active electronics also include an M-S matrix, along with an optional high-pass filter that can be set to roll off below 50, 80 or 120 Hz, polarity reversal, and a “Pultec-style” high-frequency shelving boost that is either on or off. All of these are engaged using buttons on the remote control, as is the thoughtful DIMM option, which temporarily sets both preamps to their minimum gain so that the mic can be repositioned without generating loud thumps.

Not that, in practice, this mic is very prone to loud thumps: not only are the ribbon elements within the RS-2 suspended in an anti-vibration mounting, but the entire mic is also built into its own shockmount, which is lucky, because there are no generic ones that could cope with its size and weight. Even so, the hex bolt that holds the hinge steady is prone to creep unless tightened very fully.

Some stereo mics allow the mutual angle of the two elements to be adjusted, but this creates a potential source of failure, and in any case is more useful with multi-pattern capacitor mics than it is with stereo ribbons. Like most of the latter, therefore, the RS-2 offers a fixed 90-degree mutual angle; however, the entire head assembly containing the elements can be rotated by 45 degrees between positions marked L-R and M-S. This is really just an aid to aiming the mic correctly, ensuring that the logo on the body points down the centre of the stereo field and, if used horizontally, that the shockmount doesn’t have to hold all of its weight at an angle.

Although the general design and build quality are excellent, it seems fair, given the price, to pick up on a few points of detail. For one thing, although the RS-2’s “audiophile-quality gain control system” is very smooth and linear throughout its range (+15 to +60 dB), it’s continuous rather than stepped, and the two gain controls can’t be ganged. As this is a mic designed primarily for stereo recording, it would make more sense to me to have a single gain control. For another, the engineering of the mic itself is not matched by that of the flightcase, which isn’t quite large enough to easily fit all the necessary cables. And finally, it’s all very well including a heavy-duty custom mains cable, but the one supplied with the review model didn’t mate properly with the IEC socket, and the smallest touch was enough to dislodge it. Given that the PSU needs to be in the room with the musicians, it’s all too likely to receive such a touch. 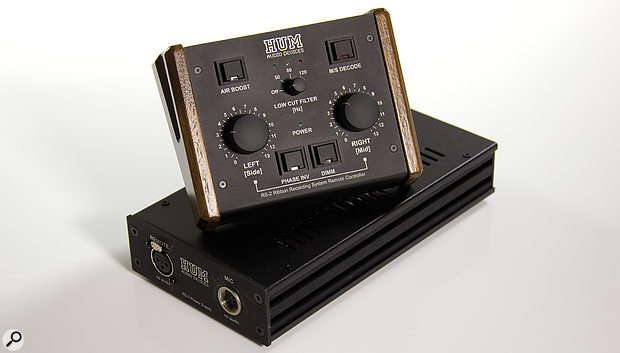 The RS-2 comes with its own power supply and a remote control for the mic’s internal preamp, high-pass filter and M-S decoder.

Being a stereo mic, the RS-2 is obviously designed mainly to be used in roles where it will provide a global rather than a close perspective on whatever’s being recorded. And used in that context, it quickly becomes clear that what the RS-2 offers in spades is exactly the sound you’d expect from a ‘classic’ ribbon mic. The specs quote a frequency response within ±3dB of 30Hz to 16kHz, which sounds about right. Once you’re operating at a distance where the proximity effect isn’t too great, it offers a full but controlled bass, but what really shines is the mid-range, which is effortlessly full and rich.

My favourite application for the RS-2 was as a drum overhead, where it can produce a ridiculously chunky and solid sound from the weediest of kits. I A/B’ed it in this role against a Royer SF12, and the difference was night and day; with its prominent presence boost and generally more modern sound, the Royer came across as positively lightweight in comparison. Of course, whether all of that mid-range heft will actually work for you in a mix is another matter, but if, like me, you prefer to start with a fairly dark drum sound and mix into a high-frequency shelving boost on the master bus, the RS-2 might well deliver exactly what you need.

As with any mic that has a definite ‘sound’ of its own there are also, of course, situations where the RS-2 reveals itself to be not the right tool for the job. During the time I had the mic for review I was fortunate enough to record a very fine children’s chorus in a lovely medieval stone hall. The RS-2 definitely came off second best to my spaced omnis in a situation where the pinpoint stereo imaging of a Blumlein array was less important than lots of air and an absence of mid-range hardness.

The RS-2 is audibly not one of the new breed of ribbons typified by the Rode NT-R or Samar MF65, which use clever ribbon geometry to create a frequency response flat to 20kHz and beyond, but the switchable HF boost built into its active electronics makes a pronounced difference to its character. I often use stereo ribbon mics for recording singing guitarists — with the mic aligned horizontally and tilted so that one element points at the mouth and the other at the guitar, you can get a surprising degree of separation without having to go in too close — and I rather liked the sound I got from the RS-2 in this application with its HF boost engaged, although further EQ was definitely needed at the mix. On relatively quiet sources like this, you also notice the benefits of HUM’s audiophile design approach: the RS-2 is a very quiet ribbon mic indeed.

Ultimately, the price of the RS-2 alone ensures that this isn’t a mic for everyone, as do its size, weight and general inconvenience. However, I think that HUM Audio Devices have definitely achieved what they set out to do, which is to create something special for ribbon-mic purists. It’s a niche product and a luxury item, but if you’re a true aficionado who treasures the smoothness, depth and punch that a classic long-ribbon design delivers, you should find a way to hear this mic.

The RS-2 is a stereo ribbon mic that has been designed and built without compromise. It’s enormous, it weighs a ton and it’s awkward to set up, but it presents the classic warm ribbon sound in audiophile quality.