Wireless systems are often expensive, tricky to use, or both — but this new set from LD Systems is neither! We put it to the test.

With all the upheaval caused by the sell-off of the radio-frequency spectrum, many musicians are having to replace their old wireless mic and guitar transmitter systems. One affordable replacement for these systems — many of which are now illegal to use — comes from LD Systems in the form of the WS1G8 HHD package. This is just part of the company's range of various permutations of microphones, guitar transmitter packs and both single- and dual-channel receivers, each of which can be used with up to six devices simultaneously. Each system comes in a moulded plastic carry case.

Operating in the licence-free 1.8GHz section of the FM spectrum from 1785 to 1800 MHz, the system uses what is claimed to be a true-diversity 192 channel receiver (the channels are arranged as 16 groups of 12 and the same group must be used for multi-device setups). True diversity normally relates to a dual-antennae, dual-receiver system, where the strongest signal always takes precedence. The various systems in the range allow you to choose between dynamic or condenser handheld microphones, or a belt-pack transmitter that pairs with a headset mic, lavalier mic, clip-on wind instrument mic or guitar/bass adaptor cable. Each has a power output of 10mW. Transmitter operating time is up to 13 hours with a pair of good alkaline AA batteries, while the receiver is powered from an included mains adaptor. The system boasts a high signal-to-noise ratio, lower than 0.8 percent distortion, and a 60Hz to 16kHz audio bandwidth.

The handheld mic included has a postage-stamp-sized LCD to show the operating channel, along with other status information including battery condition. If the battery indicator flashes that means you need to do a quick battery change. The receiver also features an illuminated display and has automatic channel scanning to make setting up fast and straightforward by seeking out the most interference-free frequencies. The system under review comprises a single-channel receiver and a dynamic microphone/transmitter. This ball-end microphone has a nicely balanced cylindrical body with a rubbery coating that is easy to grip. A slide switch activates the microphone and above that is the display. Unscrewing the lower half of the housing gives access to the battery compartment and also to a screwdriver 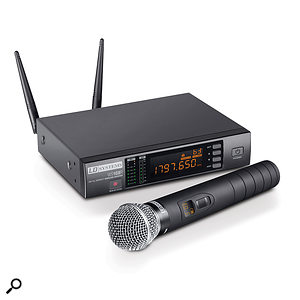 A squelch-style noise-reduction system is used in the receiver to kill the sound if the transmitter moves out of range or is switched off. Audio exits from the receiver via a balanced XLR or an unbalanced quarter-inch jack. Both antennae screw into their own RF sockets on the rear panel, and these are jointed so that they can be pivoted up into the familiar 'rabbit ears' position.

A large display dominates the front panel of the receiver, showing the operating frequency, volume, squelch status and programming information. Four buttons (Set, Up, Down and ASC) access the settings and values and, other than that, the only control is a power switch. There's also an infrared window which is used to synchronise the frequencies of the mic and receiver by pressing the ASC button. Once a group has been selected and an automatic frequency scan run to find the best frequency, the mic is then powered up and held with its flat end close to the infrared port to sync the microphone's frequency to that of the receiver. Channels and frequencies may also be selected manually on the receiver, if desired.

My previous experiences with FM radio mics have been mixed, with the more expensive ones sounding excellent and some of the cheaper ones blighted by bursts of noise that the squelch couldn't catch, and/or very poor low-signal handling due to the compander circuits used to keep noise at bay. Happily, even though this is a budget system, the dynamic range felt very natural on vocals, with no obvious noise or low-level gating artifacts. I can't comment on whether it would work as well on electric guitar for those players who use their guitar volume controls as the main means of adjusting levels as I didn't have a guitar transmitter to test, but certainly it handled vocals well enough.

The microphone itself does a capable job, and while it isn't anything exotic, it stands comparison with typical mid-priced dynamic models and delivers a well-balanced vocal sound. I was also pleasantly surprised by just how quick the system was to set up. The front panel displays include a pair of signal-strength meters and status LEDs that show which of the two antennae are active at any one time, and there is plenty of range for a typical small- to medium-sized venue gig, even with a brick wall or two in the way, as a walk around my house with the mic confirmed.

The short wrap-up then is that, though you might get a little more bandwidth and dynamic range from a digital system, this FM system exhibits no latency (all digital systems introduce a small delay), it handles vocals well and there were no nasty surprises. Given its price it has to be considered a good solution for those playing smaller venues, and of course you can use it alongside a 4.2GHz Wi-Fi band digital system if you need more than six wireless channels active at the same time.

All the big-name mic companies have radio products at various price points, but at this end of the price spectrum there are few rivals.