This compact 'wedge' speaker uses a coaxial driver to deliver broad stage coverage and a sound that cuts through. 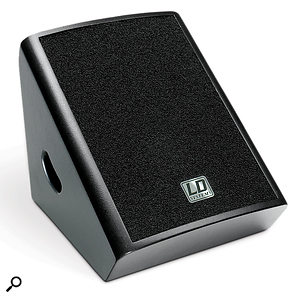 The Mon 101A from LD Systems is a very compact, self-powered wedge monitor that is the epitome of simple but effective design. The cabinet is made from plywood and is finished with a black 'spatter' finish, which looks neat and discreet and is easily cleaned. There are carrying handles on each side panel, in the form of shaped cut-outs, which are comfortable enough and more than fit for purpose. It's not so easy trying to carry the Mon 101A with one hand, as there's no bar or strap to get hold of, and with a monitor as light as this (a mere 13.5kg or 10kg, depending which part of the spec sheet you read) a single handle would have been enough.

The enclosure sits upright ('portrait' as opposed to 'landscape' orientation, you might say) and has four heavy-duty rubber feet on the bottom surface. The front of the unit is covered by an inset, convex steel grille, which only has two very small fixing screws, but holds itself in position as it has to be 'sprung' into place. The grille itself appears to be quite strong, is supported by two wooden blocks which prevent it being pushed inwards, and is sandwiched between two layers of additional protective material glued directly to the metal. On the inside is a thin, black, single-layer cloth, and the outer surface has a black foam sheet, which adds to the Mon 101A's neat and discreet looks. I like the idea of all these protective layers, especially as this is a floor monitor and, as such, will spend much of its working life pointing upwards and will be vulnerable to various kinds of potential damage.

The Mon 101A has a single internal 150W power amplifier that drives a coaxial driver arrangement, comprising a 10-inch speaker and a one-inch compression driver, via a passive crossover. The use of a coaxial driver keeps the overall size down, and also provides a symmetrical dispersion pattern (in this case it's 75 x 75 degrees) from a single point source, which is an ideal format for a close-range stage monitor. The aforementioned cloth and foam protection is important, because the coaxial driver doesn't have a front dust cap over the voice-coil area.

The rear panel accommodates all the necessary connections and controls, and presumably acts as a heatsink, although there are no external cooling fins or ventilation slots. The single balanced input connector is a 'combi' type that can accept XLR or balanced jack plugs, and there is a direct XLR output for passing the input signal to an additional monitor. The only control is a single rotary level knob, and there are three LEDs that indicate when the speaker is switched on, when a signal is present, and when the built-in soft limiter is active.

One very useful feature is the provision of a link output for mains power, which is a much neater and easier way of cabling up more than one monitor than having to run separate power leads from a remote power source to each speaker. The IEC connectors (input and link output) are good-quality versions by Volex, and will mate with Volex latching cable plugs and sockets, which avoids the problem of mains leads becoming accidentally unplugged when the monitor is moved. This is a good feature, particularly for floor monitors, which do tend to be re-positioned during the course of a performance. You can, of course, use ordinary IEC connectors as well. 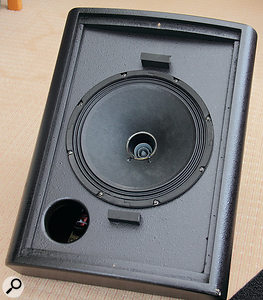 Removing the grille exposes the 10-inch woofer, with a one-inch compression driver mounted in the centre.

So how does it perform? I gave the Mon 101A a good bashing in the workshop, and used it at a couple of rehearsals as a vocal monitor and a piano amp. I also lent it to the singer in a rock covers band for a couple of gigs, to see what he thought of it. First impressions are of a very lively upper-mid and high-frequency performance, which is well suited to getting vocals across to the singer through the general level on stage. The Mon 101A is a bright-sounding speaker, and although it could be used as a main speaker in small venues (particularly for speech-only requirements), I'd say that it's always going to perform best as a monitor unless linked up to a subwoofer. The symmetrical dispersion pattern works well, and in practice there's a decent coverage angle, which means that more than one performer can stand up fairly close within the usable area.

Although the Mon 101A has a modest power rating, it delivers plenty of output for small or medium-sized events (I did a couple of quick checks in a 'real' reflective room and found that the limiter consistently kicked in at around 115dB, tested using pink noise and measuring at one metre). I tried the Mon 101A as a dedicated keyboard monitor, and as a reinforcing amp for a rehearsal with good results. As a monitor it retains the ability to 'cut through', and its natural LF roll-off keeps it clean and controllable.

When I lent the Mon 101A to the singer in a local rock band, I thought that it might not be 'rock & roll' enough to deliver the goods, but he and the band were very happy with its performance, and reported that it was a noticeable improvement over their current powered wedges — he had even started to explore pricing...

My thoughts on the LD Mon 101A are that it's a neat little asset that would perform well at smaller events, or very well on a noisy stage as a dedicated vocal monitor. It is particularly crisp and lively on vocals, and can handle full-range signals if required. The built-in limiter does its job without fuss, and this little speaker doesn't seem to mind being driven hard if required. The black paint finish is quite thin and a couple of light scratches appeared (I blame the rock band, obviously), but the woodwork is solid and there were no rattles from the cabinet even at maximum output.

The Mon 101A isn't expensive, and would be worth checking out if you're after a well built, very compact monitor that delivers good performance for the price and is simplicity itself to set up and use.

Other models to consider include the Laney CXP110, Studiomaster PAX10+ and Red Fire Audio PM10H.

A neat coaxial-speaker design that does a good job of projecting vocals, even on loud stages.