If something looks too good to be true, it usually is... Unless it's a highly affordable LD Systems seven-piece drum-mic kit! 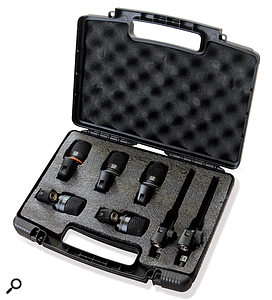 It's not often that I take a look at drum microphone kits, so I was interested to have the opportunity to try out this LD Systems set from Adam Hall. My main previous experience with LD Systems stage gear is with their LD1011 vocal capacitor mic and their D102 DI boxes, both of which I originally purchased on a value-for-money basis — and both of which have proved to be solid and reliable performers over quite a few years and many gigs.

The D1017 set is marketed as a "supercardioid drum and instrument mic set”, which is a very reasonable approach, as drum mics are generally good for use on a number of additional duties, especially where fairly high sound pressure levels are involved, such as close-miking brass instruments and, of course, all kinds of percussion.

The D1017 set consists of seven microphones in all — five dynamics and two capacitors — which should be enough for most basic kit applications. The mics for toms and kick drum are all dynamic and outwardly very similar in appearance. Four tom mics are included (so you can use one for snare, or just use your favourite go-to mic for that and have four tom mics), plus a dedicated mic for the kick, which is identifiable by an orange stripe around it. These dynamic mics are stubby and compact, measuring a shade under 10cm end-to-end (that's without an XLR plugged in), and they have built-in stand clips, which is a very handy feature. The stand clips are a good design, as the mic body is gripped firmly by a rubber-cushioned holder, while a large threaded retaining ring at the base ensures that it cannot slip out during use. The clip has a decent clamp, which is more than firm enough to prevent 'mic droop', and I didn't need to tighten any of them up even after a few outings.

The two overhead back-electret capacitors are, in contrast, quite long in the body, with a narrow barrel section at the business end — similar in size and shape to measurement mics. They have detachable plastic clips (supplied with the set but also available as accessories), which snap firmly onto the mic body and don't slip — I tried shaking them vigorously, but the mics stayed firmly in place. I also like the thumbscrew-style clamp screw, which makes adjusting the final mic-to-stand angle an easy business without the need for a screwdriver.

The D1017 set is presented in a plastic carrying case with a close-fitting lid, and although it can't be described as a flightcase, it nevertheless offers good enough protection for normal everyday transport and storage. It's not immediately obvious which side is the top, though, so I'd be inclined to stick a label on it to prevent it being opened upside-down, although the contents are held quite firmly in place by a generous chunk of foam with shaped recesses for the microphones.

All seven mics appear to be well made and very sturdy. The wire-mesh baskets unscrew easily and, more importantly, go back on with no fuss. The metal bodies have a nice solid feel to them, and the capsules look as if they have stable mountings. My impression is that they should withstand a fair bit of rough handling.

The tom and kick mics have a supercardioid pickup pattern, and the supplied specification sheet shows the polar diagrams for each. The quoted frequency response for the tom mics is 80Hz to 12kHz, with a pronounced lift above 3kHz. The kick mic has, as you'd expect, an extended low-end response which is (from the curve) about 5dB down at 50Hz. The overheads have the same tight pickup pattern as the tom and kick mics, but have an extended and more appropriate frequency response which slopes off gradually toward the low end and rises slightly above 2kHz.

I used the D1017 set at two live gigs, and I also used them for recording some brass instruments (sax, trumpet and trombone). On drums, they were well-behaved and, after a little bit of EQ adjustment and experimentation with different placements, I was able to produce a good fat sound across the kit. The tom mics exhibit a fair amount of tonal variation, depending on the distance from the source, and provided you can get them in close enough without risking stick hits, they do work nicely. I had to cut the mid-range a little, but after experimenting for a while in the workshop, I liked the results obtained using a skin-to-mic distance of around four inches. This is perhaps a little further away than I would normally place tom mics, but it seemed to give me a well-balanced sound.

The kick-mic output is meaty enough, and it's possible to get a good thump with plenty of edge to it if you're prepared to spend some time finding the best placement. I did put up one of the tom mics for snare duty at both gigs, and it sounded lively and clean, with a nice crisp top end. As the top-end response of the kick and tom mics isn't enormously different, another option is to use one of the tom mics on kick to reduce the low end if necessary — for example, if the mixer you're using has limited EQ capabilities and everything is sounding a bit too keen at the low end.

As mentioned, I tried these mics out on brass and other percussion. I recorded some timpani with the tom mics and found them to have a good warm sound, but I needed to cut the HF a little to reduce the 'bite'.

I was very happy with the D1017 set as instrument mics, and their small physical size makes them useful for close miking in large ensembles, such as a jazz or big band. I sometimes have to press drum overhead condensers into use as additional live mics for choirs and large acoustic ensembles, and I used this pair to reinforce a school choir, which I wasn't expecting. Provided they were kept about 18 inches away to eliminate plosives, these condensers did a very reasonable job and when I listened back to my direct-from-the-desk USB stick recording, they sounded much better than I had expected, and somewhat on the bright side of neutral.

Just for fun, I tried recording speech with the dynamic (tom and kick) mics, and, again, the results were surprisingly good — better than one or two of the budget vocal mics in my hire/lending kit, although I had to use a pop shield, as they are not fitted with any kind of foam or cloth lining inside the basket. I'd be inclined to install a thin layer of suitable foam here, as it would provide additional protection for the capsule within.

All in all, I found the D1017 drum-mic set to be a useful and well-made package that can also be put to good use as instrument mics. Personally, I prefer the stand-mounted arrangement, but for those who prefer drum-rim clips, this set doesn't offer that option. The lack of a dedicated snare mic may be a disadvantage, but most of us already have a preferred snare mic anyway — and it's worth trying one of the tom mics, as I found them perfectly adequate on snare and hi-hat. If I was in LD's marketing department, I'd even be tempted to stick a 'snare' label on one of the tom mics!

I began this review by mentioning value for money. However good these mics are, and whether they fit your requirements or not, it can't be denied that you get a lot of microphones for your cash. When you divide the street price at the time of writing by the number of mics in the set, they cost just over $25 apiece, and I reckon they perform far better than their price point would suggest. A landlady of mine from distant college days had a habit of continually purchasing strange, un-needed items for her house, and would respond to our politely-raised eyebrows by saying, "It was so cheap I couldn't afford not to buy it.” Now I think I know what she meant. The LD Systems D1017 drum mics are by no means trying to pass themselves off as high-end products, but they perform well and are ridiculously affordable. I have an outdoor live-sound job next month where I need extra mics for brass and percussion (around 30 in all). After trying out the D1017 set, I have just made a painless little purchase that means I have to hire in seven fewer mics!

A well-made, practical, good-quality and, above all, extremely affordable set of mics that work on other instruments as well as they do on drums.

The A-Z Of Audio Interfaces
1 month 19 hours ago.