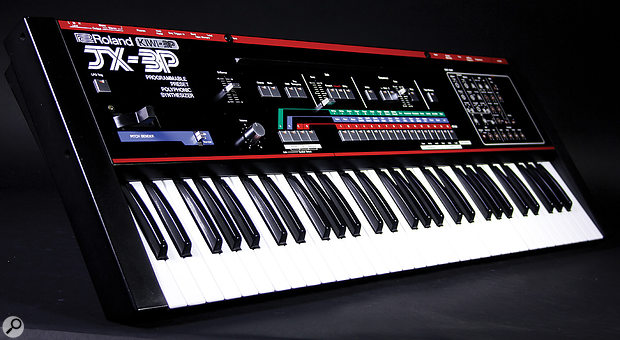 The clever chaps at Kiwi Technics have rebuilt a lesser-known Roland classic from the inside out.

Occasionally, a synth slips through the net and recedes into obscurity while lesser instruments achieve cult status. One example of this is the Roland JX3P. Based upon similar oscillators as those in the Juno series, and using the same IR3109 filters and BA662 amplifiers as the Jupiter 4, Jupiter 8, Juno 6 and Juno 60, it was an instrument possessing much greater depth than common wisdom suggested. Unfortunately, it was far less flexible than it might have been. With a single CPU-generated contour generator, a single CPU-generated LFO, and just 32 parameters per sound, it could never produce the breadth of sounds obtained from better-endowed competitors.

Today, however, the JX3P is experiencing a renaissance, thanks to the efforts of Kiwi Technics, whose Patch Editor I reviewed in July 2011. At the time, I mentioned that the company had developed a JX3P upgrade and, although this is still benefiting from ongoing development, I decided that it was finally time to take the plunge, buy a JX3P, and attack it mercilessly with a pair of side-cutters and a soldering iron.

Supplied in a small box that pops easily through your letter box, the upgrade contains a new processor chip on a piggy-back board, a smaller board and ribbon cable, some resistors and a little metal nameplate to affix to the synth when it has been upgraded. Despite its unassuming appearance, Kiwi Technics warn that installation of the upgrade is not for the uninitiated, and I agree. While it's easy to get inside a JX3P, and a bit of care will allow you to remove the boards without losing track of which cable goes where, you have to de-solder and remove the original CPU from the main board before installing the new one. The company recommends you do this using a professional vacuum de-soldering tool, but a colleague of mine (thanks, Dave) realised that there is a simple solution if you don't own one. This entails trashing the original CPU by carefully severing each of its 40 legs, removing each from the board individually, and then installing the new CPU in the vacated space.

There were then three further options. The first simply entailed clipping out a link to allow MIDI to work when the selector switch is set to its Programmer or Memory Protect positions. The second allowed the upgraded synth to retain its ability to use a Roland PG200 programmer. This required some point-to-point wiring, as well as more clipping, so, because I intended to use Kiwi's Patch Editor, I didn't bother with it. The final modification allows the user to control the speed of the chorus effect. This requires further disassembly, and is perhaps the most complex of all the jobs, requiring the removal of a small chip, the installation of the smaller piggy-back board, and another instance of point-to-point wiring. The additional benefit was small enough for me to decide that, if everything else worked well, I'd return to this another day.

Given that I had completed the modifications I was going to make on this occasion, the manual recommended that I perform calibration on the upgraded synth. Happily, I found that nothing had been affected, so I reassembled what was now a Kiwi 3P. It was time to learn how to use my enhanced synth. 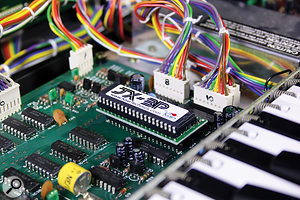 The Kiwi Technics manual warns that "The menu system in the 3P Upgrade is complex. This is unavoidable due to the number of features and the limited number of buttons available”. That's true, although the company have ensured that the underlying philosophy remains the same as editing a JX3P without a PG200. In short, you enter the editing mode, then press one of the Bank A to D buttons and one of the Edit 1-16 buttons to select the parameter you wish to edit. Obtaining a value for that parameter is then just a matter of moving the Sens slider through the available range.

So what's new? In truth, a great deal. To start with, there are now six keyboard modes, encompassing polyphonic, unison and monophonic use, with portamento available in the four unison and mono modes. There are also two LFOs (both of which generate a greater range of waveforms over a wider range of frequencies than the single LFO previously provided) and two improved ADSR contour generators, all of which can be assigned to a range of destinations. To complement these, improvements to the operation of the LFO Trig button and the bender now allow you to specify a wider selection of what modulation sources go where, and by how much. And while you would need to install a new keybed to make the Kiwi 3P generate velocity and aftertouch, it receives both of these as well as standard modulation messages. This propels it into territory previously reserved for its bigger and more sophisticated descendants, the JX8P and Super JX10.

There's more, of course, including MIDI CCs for all parameters (so you can automate the Kiwi 3P), support for the Patch Editor, a chord mode, and an increase from 32 to 256 patch memories. The simple sequencer of the JX3P has also been replaced with eight editable polyphonic sequences, each offering a maximum of 122 steps, plus a 16-memory pattern play mode, and a four-mode arpeggiator, all of which can be clocked from internal or external sources. You can link the sequencer to specific sounds, control it using MIDI messages, and play over the top of it if voices are available. The sequencer and arpeggiator will even output note data via MIDI. While these features were very low on my radar when I decided to upgrade the JX3P, they are huge improvements, if somewhat fiddly to program.

This is a remarkable extension of the JX3P's sound engine, and I'm mightily impressed by the sounds that I can now obtain when I control the Kiwi 3P using a velocity- and aftertouch-sensitive keyboard. No longer is this a limited synth whose best efforts are confined to strings and pads. Superb electric pianos, powerful basses, expressive orchestral instruments, responsive percussion, lead synths that demand your listeners' attention, and some wacky sound effects (amongst many other things) are now lurking inside. I doubt that I will ever use its internal arpeggiators, pattern generators or sequencers, but I'm sure that other players will find interesting uses for them, especially when they learn how the various functions can interact to create results that can't easily be obtained by other means.

I could think of a few extras that would benefit the Kiwi 3P. For example, even Kiwi Technics have been unable to give the JX3P pulse-width modulation. But this is just nit-picking, and there are only two genuine caveats about turning a JX3P into a Kiwi 3P. The first is the physical risk to the synth. While there's no reason to believe that it should come to any harm during the upgrade, there's always a risk of something going awry while you're delving around in its guts. The second is the complexity of the upgraded instrument. It's perfect for techies who will spend happy hours burrowing deeply into all its new features, but some players might mourn the passing of the original's relative simplicity.

If you've ever yearned for a synth that (in principle, at least) combines the character of the Junos with much of the power of the early Jupiters and many of the performance capabilities of the later JXs, it now exists. Best of all, it's neither hyper-expensive nor hard to find. You can buy a JX3P for around £250$400 so, given that the Kiwi 3P upgrade retails for approximately £200$300 including shipping, you should be able to obtain all of the above for £450$700 plus half a day's work, which is currently less than the second-hand price of a Juno 106. You could even add a Patch Editor for around £360$500, to give it a physical control surface. The Kiwi 3P is not for everyone, but I have no doubt that aficionados of Roland's analogue polysynths will receive it very warmly indeed.

The Kiwi 3P upgrade turns the JX3P into something that competes with many of the more revered (and more expensive) analogue synths from the '70s and '80s. If you like the sound of Roland's analogue polysynths, you should check this out.