With digital control, discrete electronics and a saturation processor, Looptrotter's latest device is no run-of-the-mill preamp.

This is the third Looptrotter product I've had the pleasure of reviewing in these pages, so for more background I'll refer you to the earlier reviews, which are free to view at http://sosm.ag/feb12-looptrotter and http://sosm.ag/jan13-looptrotter. In my review of the company's Satur-8, I mentioned that "a 500-series module and guitar stomp box would be sensible future additions to the line.” As yet, there's no stomp box, but the 500-series module is here, in the form of the Saturamp.

This, though is not a simple port of that processor to a new format. Instead, Looptrotter opted to build their saturation circuit into a new mic preamp design. The preamp's main gain stage comes courtesy of a discrete op amp, which caters for up to +60dB of gain. A further 6dB is available at the output stage, taking the maximum gain to +66dB. To cater for 'hot' mic signals, there's a switchable -20dB pad. Alongside this are the usual +48V phantom power and polarity-invert functions, 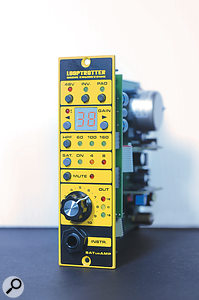 and a front-panel 1MΩ high-impedance input accompanies the expected line- and mic-level inputs (which are presented via the host 500-series chassis). The instrument input stage employs discrete FETs (Field Effect Transistors), and is deliberately designed to add a touch of 'analogue warmth' to the signal, by stimulating even-order harmonics. The preamp's Sowter transformer is a modern equivalent of a model found in old API preamps.

The 500-series format is not the novelty it once seemed, and the smaller format makes good sense, particularly for a single-channel preamp (why pay for a 19-inch rackmount chassis to house such a small volume of circuitry?). Yet, one casualty in many 500-series designs is the user interface, which too often leaves the user with fiddly or inaccessible controls, and hard-to-read markings. Looptrotter have made skipping this hurdle seem effortless, by making this all-analogue device digitally controlled. This means all switching can be performed via sealed relays or semiconductors, rather than conventional physical switches, and this makes for efficient use of front-panel space. Thus, there's plenty of room for a digital display of the preamp gain and other status LEDs for key functions but, importantly, it also ensures that precise setting and recall are possible.

I'd expect any modern preamp worth its salt to feature a high-pass filter, but Looptrotter have gone a step further by providing three filter types, each with a different turnover frequency. The lowest, at 60Hz, is a Chebyshev design, which is steeper than more commonly used filters, the main benefit being that unwanted low-end bumps and rumbles can be sliced away without sacrificing so much of the wanted low end of bass instruments. The trade-off is a little frequency ripple in the pass band (the wanted signal). At 100Hz, a more appropriate setting for sources such as vocals or electric guitar, the more gently sloped Butterworth filter is used. Finally, at 160Hz, where subsonic problems are rather further away from the wanted signal, the even more gentle, and less 'corrupting', Bessel filter is employed.

The mic preamp alone, then, offers much, but this product's real USP is the dedicated, solid-state saturation section. This doesn't set out to 'model' a specific device, but it does provide an effect which can be deployed in the same situations as you would the saturation of a console channel or of analogue tape. Like the preamp, this is digitally operated, with a single button switching the circuit in/out. Two front-panel LEDs indicate when the signal is being driven to four and eight percent THD respectively, the amount of saturation being determined by the signal level running into this circuit.

Sonically, the mic preamp delivers everything I'd expect of a classic transformer-balanced design: it's capable of essentially neutral gain, with just a hint (to my ears) of forward edge over most of its range. Driving it harder rewards you with a slight thickening. It's not something for orchestral recording, perhaps, but other than that the potential applications are numerous. What makes the preamp stand out most, though, is the digital control and the associated display, 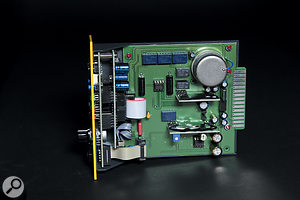 The sparse appearance masks the digital sophistication and discrete analogue electronics of the Saturamp. which make operation and recall a cinch.

I described the saturation effect in (and provided audio examples with) the Satur-8 review, so I'll keep things brief here. Essentially, it's a 'warm' distortion, yet one which never becomes dull-sounding. On the right side of fuzzy, but much smoother than fizz, it proved the perfect partner to DI'd bass and synth tracks in particular. Deployed more subtly, I found it a very useful effect on both vocals and electric guitars, as it can both tame harshness and add a little thickness and weight at the same time. Coupled with the preamp stage, it can also act as a soft clipper.

In practice, I generally preferred to use the preamp without the saturation stage when tracking, and then use the saturation as a line-level process while mixing. My six-slot API Lunchbox makes this easy, as you can plug a mic into the rear-panel XLR while leaving the device hooked up to the DAW's line-level I/O via the D-subs; no repatching is required. I'm sure some people will prefer to commit to the sound while tracking; whichever way you prefer to work, this device puts the decision in your hands.

As I said above, I expected to see Looptrotter's saturation processor appear in the 500-series format, but I could not have predicted the thoughtful way in which Looptrotter delivered it. This is an original design, and one that's genuinely useful in both a tracking and a mixing context, and in a range of genres — rock, pop, hip hop and dance styles in particular. Considering all that's on offer in this device, the price is rather attractive too.

The world is seemingly awash with 500-series mic preamps now, but there are rather fewer that offer this sort of signal processing. The closest competitor, Chandler's Little Devil preamp, takes a slightly different approach, but is equally versatile and should appeal to a similar audience.

This is a classy and thoughtfully designed mic preamp and dedicated analogue saturation processor. The price is worth it for the digitally controlled preamp alone, but the saturation circuitry is the star of the show!