Lush Projects' kit could be the cheapest way into modular synthesis for anyone handy with a soldering iron.

If you have always wanted a modular analogue synthesizer, but haven't had the opportunity (or the money!), then maybe your time has come. The recently released Lush One Synthesizer offers the opportunity to buy a MIDI-controlled modular analogue monosynth from just £69. What's the catch? Well for starters, you have to build it yourself from a kit...

The Lush One family consists of two boards, each available separately. The Base model offers MIDI-to-CV, dual oscillators, and a voltage-controlled filter (VCF). The Contour board is designed to provide an extra set of modules: it adds an ADSR envelope, an LFO, voltage-controlled amplifier (VCA) and a ring modulator. Both boards come as a complete package of components that only require time and a soldering iron to put together. In addition, and at an additional cost, there are two laser-cut acrylic cases available, 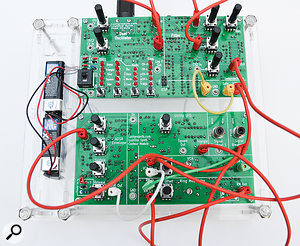 The Base and Contour modules mounted in the optional transparent acrylic case. plus extra patch lead kits.

The Base kit comes in an innocuously small zip-lock bag. Inside is a circuit board, all the electronic components you need, plus three small patch leads with 2mm banana plugs. Due to the large number of components that need to be soldered in, this kit is not for a first-time solderer. If you want a 'warm up' project, I would recommend starting with something like Lush's Vibrati Punk Console (/sos/aug11/articles/lush-projects-vpc.htm), which I reviewed in the August 2011 edition of SOS. The build instructions are available online in presentation/lecture format, which means that there are few words, but lots of pictures. The instructions are very clear and the parts are clearly labelled.

The circuit board itself is very clearly laid out and Lush Projects have obviously put a lot of thought into the design. This is important because it is a key part of the working synth: the knobs, switches, patch points and LEDs are all directly attached to the board and the labels on the board also serve as front-panel legending for the finished module.

The actual build took me about three hours. I had one small problem, but a quick email to Lush soon resolved it. It did, however, point out one thing lacking in the documentation: a set of tests to ensure that you have got all the different modules working properly. Lush are considering adding this. The Contour kit was equally straightforward to build and took a similar amount of time.

Lush One Synth Base

Once you have built the synth you can play with it! Perhaps the first thing to do is to look at the user documentation, which is also online. This is firmly aimed at those who are new to modular analogue synthesis and, like the build instructions, it comes in lecture format: videos together with notes available as PDFs. The documentation forms a really good introduction to the subject of modular synthesis, and the combination of notes and video (which shows you how the different options work and sound) is very powerful and in my opinion much more useful than a manual.

The Lush One is powered by two 9V batteries. The audio out on the Base is on a 3.5mm jack plug, and the MIDI input is a standard five-pin connection, though the synth can be used without MIDI just by patching the 5V socket to the Gate In.

The core of the Lush One is its dual oscillators. There are four push buttons that cycle through various options for the oscillators and these are indicated by the four rows of LEDs just above the buttons. The first two buttons select the waveform for each Oscillator from saw, square, sine, triangle and ramp. These two oscillators are hybrid digital/analogue followed by a pure analogue filter. The obvious benefit of the hybrid oscillators is that OSC1 is automatically in tune with no calibration required.

By default, OSC1's frequency and gate is controlled by the MIDI input, but a button can be used to select between MIDI, CV or MIDI+CV. If you are using CV, there are two modes: CV-L has a smaller change of frequency for the same voltage change than CV-H. 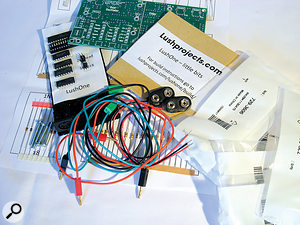 The component parts of the Base module. Whichever setting you choose applies to both OSC1 and OSC2.

OSC2 has a number of options. Firstly, it can run continuously or be triggered by the same gate as OSC1. It can also be set to trigger just one cycle, which can be used to give some very basic attack shaping to the sound. Alternatively it can be set to run at the same base frequency as OSC1.

The frequency from the OSC1 is output as a log value on a patch cable. This is uncalibrated and available at roughly 0.65V/Octave. This is really useful in many scenarios and I think this shows exactly what good value this kit is: just the MIDI-to-CV convertor in most modular synths costs considerably more than the Base does.

Although the OSC1 and OSC2 are digitally controlled, the signal is then passed through an analogue filter and from there on the remaining chain is 100 percent analogue. The filter itself has two CV inputs as well as cutoff frequency and resonance controls. Usefully, the VCF (and the other modules in the Contour) can be used to filter external audio input just as with any modular analogue synth.

The Base produces all the fun, randomness and uniqueness that you would expect from an analogue synth and it behaves just as noisily and interestingly as any piece of 1970s kit. Even with the few modules present, I got a number of good sounds out of the synth, including some pleasing bass synth sounds. I suggest that anyone wanting to get a better idea of the sounds watches some of the tutorial videos on the Lush Projects web site.

The Contour board is completely analogue. It adds an attack/delay/sustain/release (ADSR) envelope, a second LFO, a voltage-controlled amplifier (VCA) and a ring modulator (RM). In addition, it provides two phono output points.

The VCA is typically used to apply the ADSR envelope to the output but can also act as a CV Multiplier. The ring modulator probably adds the most fun of all the extra modules, and the Dalek-inspired sounds that it brings justify the additional cost of the Contour on their own. I found the Contour board added a whole new dimension to 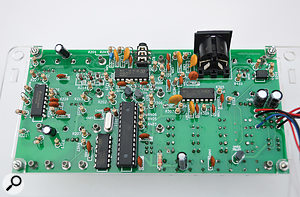 And here's what's going on underneath the Base. The five-pin MIDI socket is at the top right. the Base and is worth getting if you want to use the Lush One in earnest.

The real joy of a modular analogue synth like the Lush One is tweaking the pots and re-patching. Being truly analogue there is infinite variability and I enjoy knowing that no-one else has created exactly the same sound before. Having built the synth myself only added to that pleasure.

The first thing that impressed me about the Lush One is the great design: both boards are effectively laid out, and each board crams a lot of functionality into a very small space. And the way that the circuit board incorporates the controls and the patch points makes a virtue out of the low-cost design.

The second thing that impressed me was the complete flexibility that the system offers: every single aspect has a CV in or out, including MIDI-to-CV, and the result is that this really is a highly expandible synth. You could easily see several boards put together, and I hope that Lush add more to their range. In fact, since writing this review, Lush have made available a new module called the Inca, which includes a much more powerful four-signal mixer suitable for interfacing with Eurorack modules, a noise source, a Sample and Hold, and even a thumb-joystick input. This is a good sign that the Lush One kit is continuing to evolve.

If you already own a modular synth, the Lush One kit might not be for you, but if you are looking to add something analogue to your sonic toolbox or just fancy a bit of DIY synth building, these two modules could be your best way in.

At this price there are no other kits that include MIDI. From Germany, the Doepfer DIY Synth is a ready-built board with VCO, VCF, VCA, ADSR, LFO, Slew Limiter, and Inverter, but no Ring Modulator, for €100. This does not include any potentiometers, patch points, controls, switches and so on, nor MIDI-to-CV. From the US, Music From Outer Space offer the Sound Lab Mini-Synth kit for $190 including all the components (but you need to make or buy a faceplate to mount the pots/switches onto). This has two VCOs, LFO, an AR envelope, noise generator, VCF, and VCA, but again no MIDI.

The Lush One is probably the cheapest way to start with true modular analogue synthesis, and the three modules together provide a versatile and fun kit. If you have reasonable skills with a soldering iron and would like to get into analogue, this is a good start, and great fun too.