Anyone who has used one of Native Instruments' Abbey Road drum instruments will be aware that they are a mixture of old and new: the sampled kits were of a certain vintage, as was some of the recording gear, but the user is able to manipulate the samples using the tools of a very modern software interface.

Drumlab is very similar in that it is based on high-quality acoustic drum samples and has an interface that allows the user to mess with them in all sorts of ways. Unlike the Abbey Road series, however, the focus is more on manipulating audio than authenticity.

Across the top of the interface is a panel of menus for selecting presets. The main menu specifies the general sound category — the options being Smooth, Tight, Fat, Dirty, Special and Raw — and each of these has its own sub-set of presets. The same panel offers a means of quickly auditioning MIDI grooves, although there is also a dedicated page that gives control over things like groove tightness, swing and velocity. In all there are 90 groove types and 10 variations of each.

Although groove editing is not possible, editing the various drum sounds is very easy, and the majority of the interface is given over to this. In the middle section there are graphics of all the drums, cymbals and extras such as bongos, woodblock, cabasa, agogo, finger snaps, claps, sticks, triangle and tambourine. Clicking on one of the above immediately makes it sound out, and also brings up its level slider, pan knob and solo/mute assignment, all of which are editable and effectively behave as mixer channels. At the same time, panels appear at the bottom of the page showing the editing parameters and effects settings of 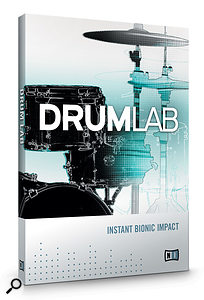 the selected drum, and this is where the actual drum sounds are altered.

The snare, kick and toms all have a mix slider which goes from acoustic to electronic and can be set anywhere in between. There are 10 snares to choose from (the kick has nine variations and the toms have six) and 20 electronic layers, so quite a lot of mixing and matching is possible.

The effects section is similarly equipped to that of the Abbey Road products, although its look has been altered. Here the user has control of transient attack and release, a compressor, saturation, a three-band EQ and reverb send level.

The overall ambience of the kit mix is determined by the relative settings of the Stereo Overhead, Mono Overhead, Mono Room and Reverb panels. Like the individual drums, these have their own mixer channels and an effects processing chain. Clicking on the reverb, which is based on Kontakt's convolution algorithm, brings up pictures of studios, rooms, chambers, spring reverbs and plates, and every one has its own set of preset variations.

Most importantly, the drums sound very good. The room sound gives a real sense of space, but isn't unpleasantly harsh or booming. A lot of the presets actually sound pretty good already too, so editing is all about getting a kit to suit a composition rather than to improve its sound. As for the editing process, the designers have made it idiot proof, so even though there are plenty of changes that can be made, the controls are simple, clear and easy to master.

Drumlab is not the cheapest product of its kind on the market, and it is up against some good DAW drum instruments. Nevertheless, NI's technicians know a thing or two about drum recording and processing and have ensured that Drumlab is not lacking in quality or flexibility. So for anyone who wants more options in terms of sound control, it is well worth considering. Tom Flint