Numark's Orbit is aimed at DJs, but it also has plenty of potential as an unusual controller for the studio.

For years, music creation and DJ'ing have existed in largely parallel worlds, both pushing technology to their own ends and coming up with interesting products, but with little overlap or cross-fertilisation. As someone firmly in the composition camp, I find the DJ technology scene curious and slightly bemusing, but there's clearly a lot going on interms of both hardware and software innovation: a quick glance at Numark's web site shows a huge selection of wonderful-looking DJ tools. Technically, though, this gear works in much the same way regardless of genre: USB devices operating as controllers, perhaps with some audio mixing functionality, connected to production or performance software on a computer.

Enter the Orbit, a small, low-cost USB MIDI controller whose design aesthetic clearly marks it as coming from the DJ fold, but which looks like it might be interesting as an input or performance device away from the DJ scene. The key selling points here seem to be portability, motion sensitivity and wireless operation, a combination of features which warrants a closer look.

The Orbit looks, and feels, like a large and chunky game controller. A central control wheel is flanked on each side by eight pads containing multi-colour LEDs, while small pad buttons above and below the wheel allow for bank and 'virtual knob' (control wheel assignment) switching. Two shoulder buttons are mounted on the top edge of the device, again mimicking the design of game controllers.

The underside of the Orbit has a rotatable bracket into which can be threaded the included velcro strap, allowing you to actually wear the device, if you're that way inclined, while two metal hoops on the lower edge would instead let you hang it round your neck. If that all seems too much, rubber pads allow the Orbit to sit solidly on a table.

On the whole, the build quality of the device seems good. A slight disappointment is the shoulder buttons, which appear to be chrome-coated plastic and feel a little cheap, although they worked well enough. The central control wheel is smooth but a little stiff for my tastes; unfortunately there seems to be no way to adjust the friction.

The Orbit comes with a quick start guide, but no manual or software, instead directing you to the Numark web site for downloads. There's a bunch of Traktor templates available, plus Numark's own Orbit-specific DJ software and a device editor. Annoyingly, you're forced to go through a tedious registration process, armed with the serial number of a purchased unit, before gaining access to the Numark software; a process rendered more annoying by its complete failure to work for me. Product software downloads provide useful information about how a device works and what it can do, especially in the absence of a manual, so blocking access to it seems counterproductive. 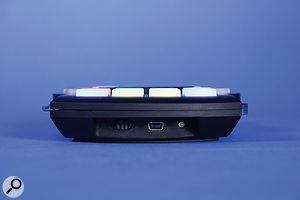 At the right-hand side of the Orbit is a power switch and the unit's only wired connection to the outside world, a mini USB port.

The Orbit operates either as a conventional wired USB MIDI controller — it has a mini-USB port, and is MIDI class-compliant — or wirelessly using a small USB dongle. (The non-replaceable internal battery has a quoted charge life of eight hours.) From the point of view of the computer, the two operating modes are identical: you see MIDI from an 'Orbit' controller either way. Accordingly, I connected the Orbit to MaxMSP to see what MIDI it generated. The pads and shoulder buttons generate note events (all at fixed velocity) while the control wheel, and the bank switch and virtual knob buttons, generate controller events.

The bank select switches change the selected 'bank' — in MIDI terms, the MIDI transmit channel — while in each bank the virtual knob buttons switch the control wheel between four different virtual controls. That's 16different control outputs, although you can obviously only manipulate one at a time. In the default preset, the first three 'knobs' per bank are standard MIDI controllers, with values ranging from zero to 127, while 'knob 4' is an infinite encoder, putting out increment and decrement messages. I tried out the encoder mode in Ableton Live and it worked fine (Live calls it '2's Complement Mode'): you have to spin the wheel six or seven times to get the full MIDI range. The wheel resolution does seem rather variable, depending on speed, and in absolute mode I only seemed to get even-numbered controller values, which is usable but not stellar.

The control wheel is surrounded by a display ring of blue LEDs to indicate current setting, which is useful but, again, the resolution is low: there seem to be only eight distinct LED regions, each shown at one of eight levels to get a fading effect. As a clear, quick-glance indication of rough setting, the display serves its purpose.

The shoulder buttons activate the on-board motion detectors (which, obviously, will only work if you're holding the device or otherwise moving it around), generating MIDI controller data. The detectors appear to be accelerometers, so they detect orientation (more correctly, gravity) and acceleration. The left shoulder button turns on left-right motion detection — the main pads strobe left and right in yellow while motion is being tracked — while the right shoulder button detects front-back motion, with the pads strobing up and down in blue. The two detection modes are independent and can be latched, although the colour strobing appears to be hard-wired and overrides any other colour settings. I had to hold the device tilted slightly back to get a 'middle' front-back controller reading of 64; there doesn't seem to be a calibration routine to set this, although it's unlikely that you'll care that much about the middle point. (It also makes me wonder how you're supposed to wear the device, since if you hold it vertically you'll peg a controller value at zero or 127.)

At no point in this exercise — except for the motion detection modes — did any of the multi-colour pads light up, suggesting that, if anything, they operate in 'MIDI Local Off' mode and have to be addressed specifically. We'll look at this shortly. 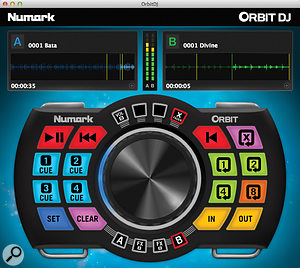 The Orbit DJ application, showing a bank of loop controls.

Orbit DJ is a dedicated DJ app for the Orbit. Since you're not reading a DJ magazine I won't spend a lot of time describing it, and in any case it appears to be an entry-level program designed to show off the Orbit's features (and one which, as I write this, doesn't even have a manual); serious DJs would presumably be drawn to something like Traktor.

One thing which Orbit DJ does do is illuminate the pads in glorious colour. On screen it presents a schematic of the Orbit, showing all the pad assignments. Orbit banks 1 and 4 are the A and B track sources, while banks 2 and 3 offer built-in effects control. The effects are completely preset, off-on affairs; the only control offered by the control wheel is levels of a three-band EQ. The motion sensor button presses are flashed up on screen but the sensors don't appear to be mapped to anything.

The Orbit's MIDI Editor looks much as you'd expect: like the DJ program, it presents a schematic of the device and allows pads, and the control wheel, to be assigned note, controller and channel values. The pads can be set to operate as momentary switches or to toggle, and the control wheel can be put into absolute or relative mode; this all happens on a bank-by-bank (and, in the case of the wheel, virtual-knob-by-virtual-knob) basis. The pads can also be assigned colours, again bank-by-bank. (This can also be done directly on the Orbit itself with a particularsequence of button presses.) There are 12 colours to choose from (including 'off') a compromise from the full RGB range, but in practice any finer resolution is probably going to be imperceptible.

Pad colouring is the area where the Orbit most disappoints. While the editor allows colours to be set statically, there's no exposed MIDI mapping to change colours under remote MIDI control. Clearly this is possible — Orbit DJ controls the colours dynamically, as does (obviously) the editor — so it's frustrating that there's no documented method to do this, and it limits the Orbit's use in home-grown or customised applications. In due course, I would hope methods would become known and disseminated in the MIDI software community; the editor is actually a MaxMSP-based application, so peering inside the Max patcher might provide some insights. 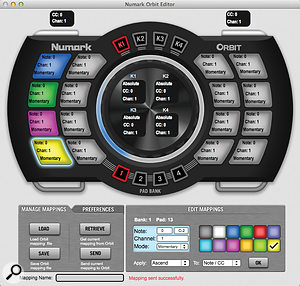 A bit of preset pad colouring in the Orbit Editor.

The control wheel's MIDI position, in absolute mode, appears to be maintained by the Orbit itself. It would be useful if external software could alter this position remotely, to allow more sophisticated control-switching setups.

I spent a little time playing with the Orbit's triggering of notes and controlling instrument and effect parameters in Live, and also driving some on-screen graphical displays in Max, to get some sense of the smoothness and responsiveness of the device when generating MIDI controller streams. I was anticipating latency problems with the wireless connection,having developed a deep distrust of packet-based Wi-Fi systems, but the Orbit's wireless performed flawlessly with no discernible delay at all. There was some latency and a bit of jumpiness in the controller data coming from the motion sensors, but you probably wouldn't want to use motion for detailed or time-critical control anyway. In all other respects, the Orbit worked well and without problems.

The Orbit does look a little like a toy, and this did rather cloud my preconceptions of it, as did the less-than-impressive bundled DJ software. In practice, though, the Orbit is well made and, with the possible exception of some latency from the motion sensors, works well as a hand-held controller. It's a shame that there's no documented method for remotely driving the pad LEDs: I can see Ableton Live users wanting to do this (for feedback when launching clips, for example), while Max hackers will see all sorts of potential in the Orbit for display as well as control. If that barrier can be overcome, the Orbit will have potential as a quirky but rather useful piece of MIDI kit.

The Orbit is a hand-held wireless USB MIDI controller, with a central DJ-style control wheel, motion sensors and button pads featuring multicolour LED backlighting. Software support omits LED control, but the device itself is solid and offers a decent bang for the price.