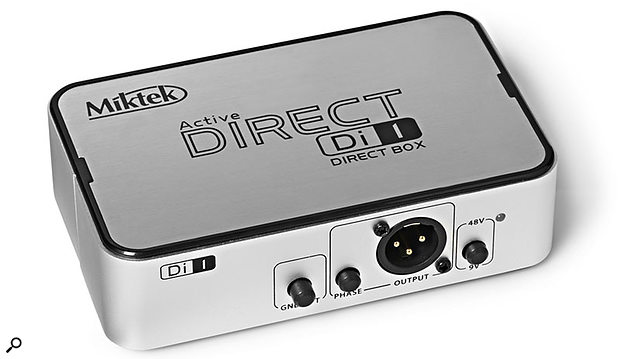 DI boxes are a mainstay of both studio and live sound, acting as ‘go betweens’ when matching various signal sources, such as electric guitars and electronic instruments to balanced mic inputs. Their balanced, low-impedance outputs make them capable of driving long cable runs, while the high input impedance of a typical active DI box means that it won’t unduly load passive guitar pickups (plugging a guitar directly into a line input can compromise both its tone and output level).

Miktek’s single-channel DI1 can be powered from either standard phantom power (24-48 VDC) or from a PP3 battery. The presence of phantom power isolates the battery, while a switch turns off the battery when the box is not in use and also selects between battery and phantom operation. A bright blue LED indicates that the box is powered up. A Thru connector enables the DI box to take a feed from a signal without breaking the signal chain. Both the input and Thru connectors are on quarter-nch jacks, while the output is on a balanced XLR.

A Pad switch reduces the input sensitivity for high-level sources and a Ground Lift switch helps you avoid ground loops when the source and destination equipment are separately grounded. With the pad engaged, the DI1 can handle speaker-level signals from guitar amps — just plug the amp into the input and the speaker into the Thru socket. There’s also a polarity invert switch labelled ‘Phase’ (a term sure to make our Technical Editor Hugh Robjohns foam at the mouth!). One feature not found on any other DI box I’ve encountered is a switch that reconfigures the In and Thru connectors to act as the two inputs of a passive mixer, allowing two input signals to be combined. 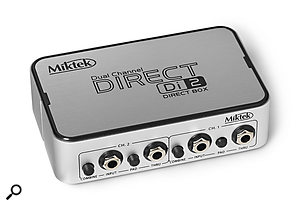 On a technical level, the input impedance without the pad engaged is 1MΩ, and it’s 10kΩ when the pad is engaged. The frequency response is given as 5Hz to 35kHz (-3dB) and the noise level as -104dBu. I used the box to do some direct guitar recording and also to take the output from a guitar amp’s speaker output directly into my recording system. In both cases, I was rewarded with clean results, with no hum problems, no evident tonal compromises and no perceptible background noise.

In most respects, the DI2 is simply a pair of DI1s sharing the same box, and the only controls common to both channels are the ground lift and the 48V phantom/9V battery switch. There’s also no polarity-invert ‘Phase’ switch on this model, but you still get independent Pad and Combine switches, as well as Thru jacks. Repeating my guitar recording tests confirmed that the performance was indistinguishable from that of the DI1, and while you can spend more to find a DI box that’s more rugged and that offers a marginally better on-paper specification, I have no complaints about either of these boxes for studio applications. They also look to be rugged enough for general live use — though I probably wouldn’t pick them as part of a heavy-duty touring rig. Given their attractive pricing and ability to handle both instrument and speaker-level inputs, there’s a lot to like.