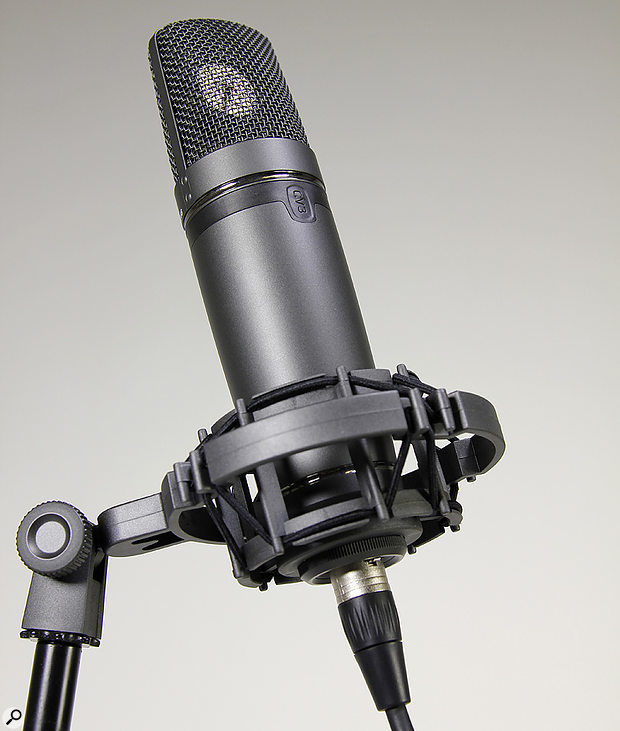 This classy valve mic is redolent of the classic German designs of old, yet comes at a fraction of the cost.

Microphone manufacturers Miktek, based in Nashville, Tennessee, first appeared in the pages of SOS in May 2011, when Paul White reviewed the company’s CV4 multi‑pattern mic, and we have since looked at a number of their capacitor and dynamic models, as well as a host of the company’s studio accessories, including preamps and headphone amplifiers. All of Miktek’s mics are assembled in the company’s Nashville factory, but the individual components are sourced from the US, Europe and the Far East.

Shipping in a very smart aluminiumaluminum briefcase, the company’s new CV3 multi‑pattern valve microphone is protected in a nice polished‑wood presentation box, which also contains a ‘swivel mount’ stand adaptor. Besides this box, the briefcase contains a mains power supply (with nine‑position polar‑pattern switch on the front panel), a seven‑way cable to link the PSU to the mic, a mains cable, and a ‘cat’s‑cradle’‑style shockmount. I initially thought the mic‑cable connectors were standard Neutriks, but closer examination revealed them to be marked ‘Yongsheng’, which turns out to be the product of a Chinese Neutrik subsidiary company (who also makes the low‑cost Rean connectors).

Both mic mounts are designed to screw onto a thread around the XLR connector at the base of the mic, and both are supplied with 3/8 to 5/8‑inch thread adaptors. The cat’s‑cradle mount uses traditional elastic loops between the inner and outer plastic frames, and incorporates a means of securing the cable. This is an important consideration to prevent vibrations travelling along the cable from reaching the mic (and thus circumventing the shockmount’s isolation) — something that far too many manufacturers completely overlook.

The CV3 microphone itself looks more U67‑esque than the CV4, which appears to be more of a visual homage to the U47. However, at its core, the CV3 shares exactly the same dual‑diaphragm capsule as the CV4. This MK9 capsule was developed by Miktek and features one‑inch centre‑terminated diaphragms (like the Neumann K67 capsule used in the U67) made of five micron‑thick Mylar with a 0.4‑micron evaporated gold conductive layer. Each of the two diaphragms is precisely tensioned over carefully machined backplates, and the two capsule sub‑assemblies are mounted back to back to create the final composite Braunmühl‑Weber capsule (the original dual‑diaphragm design being conceived by those two titular gentlemen in 1935).

The CV3’s head amplifier is claimed to employ “exotic discrete components”, although I couldn’t see anything I’d describe as particularly exotic in there. The impedance‑conversion valve is a selected wire‑ended sub‑miniature pentode held securely in place by some kind of silicon glue, but I couldn’t discern the model number. The output is via a small custom‑wound AMI transformer, made in America, and the overall construction is neat and tidy and looks quite robust.

Aside from a couple of chrome rings at the top and bottom of the main body, the mic is painted in a very dark grey colour with a matte‑silk finish, as is the dual‑layer wire‑mesh grille. The manufacturer’s badge indicates the front axis of the mic, and the serial number is engraved on the rear of the body. Unlike the CV4, the new CV3 has two recessed miniature toggle switches at the back of the mic under the grille, and these select a 10dB pre‑attenuator and a high‑pass filter (although no information is provided on the modified response).

The mic body features two switches: one to engage a 10dB pad, and another to engage the high‑pass filter.

A unique QC test frequency response plot is included with the mic, but it is traced at such a small scale and with very heavy smoothing so it reveals very little about the mic’s particular response quirks, and there is no information as to which polar pattern was tested (although I suspect it’s the cardioid mode). Overall, though, the cardioid response is commendably flat between 20Hz and 1kHz, with a gentle HF boost of about 5dB above that before rolling off smoothly above about 12kHz. Naturally, the specs claim a response of 20Hz‑20kHz, but give no limits. In the fig‑8 mode the HF boost is less pronounced and the roll‑off starts noticeably earlier, while the omni mode seems to have a slightly more coloured top end, with a bit of a suck‑out around 5kHz and a higher and narrower presence peak around 10kHz.

Sensitivity is given as ‑35dBV/Pa (which is 17.8mV/Pa), and the equivalent self‑noise as 16dB SPL (but without stating whether that’s a weighted figure) — but both are fairly typical of this style of microphone, anyway. The maximum SPL is claimed to be 133dB, and I presume that is with the pad engaged. In fact, all of these specifications are identical to those of the CV4 model, which uses the same capsule but a different valve and transformer. 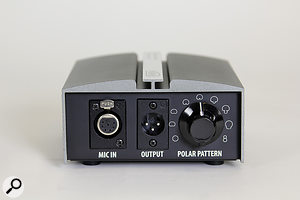 The chunky power supply also houses a nine‑way pattern selector switch.The compact and very modern‑looking linear power supply unit was apparently designed in Nashville, but it’s built entirely in China and the internal construction is not quite as tidy as the mic itself. The rear panel carries an IEC mains inlet (this is a Class‑1 grounded power supply), voltage selector and on/off rocker switch. A mains fuse is built into the IEC inlet, and there is an HT supply fuse inside.

Moving to the front panel, there’s a seven‑pin female XLR connector for the cable from the mic itself and a standard three‑pin male XLR for the output (both Yongsheng sockets, again). A large winged rotary pattern‑selector switch provides a cardioid polar pattern at the 12 o’clock position, extending to omni when rotated counter‑clockwise and fig‑8 when moved clockwise, with three intermediate patterns in each direction, giving nine pattern options in all. Changing pattern causes a thump and brief mute as the capsule polarising voltages are changed, but this is quite normal.

As with its older sibling, Miktek recommend the CV3 for myriad recording duties including (but not restricted to) vocals and backing vocals, acoustic instruments, piano, string ensembles, brass, drum overheads and as ambient room mics. So, a general all‑rounder, then!

While the manual might be rather light on precise technical specifications and information, there’s actually quite a lot of practical information about mic placement in general for common instruments and vocals, as well as the use of two mics in various stereo arrays. From this it appears Miktek see their customer base as deep‑pocketed amateurs rather than seasoned professionals.

I don’t own any valve mics, but I rigged an AKG C414EB as a familiar reference mic for comparison with the CV3 as it is also recognised as a good all‑rounder option. My initial impression of the CV3 was of a fundamentally neutral sound with a detailed and relatively open and airy top end — but I wouldn’t describe it as overly hyped or ‘edgy’ in that region; it’s quite natural and smooth sounding.

The low end is quite extended and full, too — rather more so than that of a vintage U67, I think — and it delivers that classic larger‑than‑life character so often associated with vintage mics through its full‑bodied sound and hint of valve warmth, but again it’s not over‑egged at all. The proximity effect is moderate when used close‑up in cardioid mode, but can be quite strong in fig‑8, and I found the built‑in filter switch useful in ameliorating these bass tip‑up effects. I also found the elastic shockmount a real benefit as the mic seems quite prone to picking up low‑frequency vibrations through the stand on the swivel mount — and it is well worth making use of the built‑in cable isolation spigot, too.

The CV3 is not a U67 clone, but it does share some tonal similarities, and I can see why Miktek recommend this mic as an all‑rounder; it is a pretty neutral, clean‑sounding mic which delivers very usable results in a remarkably wide variety of applications. I tried it on both male and female vocals, solo cello, both ends of a Leslie cab, electric guitar and a flugelhorn, and while it wasn’t always the mic I ended up using it always delivered perfectly respectable results. The pad and HPF switches increase the versatility considerably.

Other viable options include the Sontronics Aria, MXL Revelation and Genesis, SE Electronics’ Gemini 5, Rode’s NTK and K2, and the Peluso P67.

The CV3 is an impressive-sounding microphone, styled loosely along the lines of the Neumann U67 and delivering a similarly smooth tonal character. This is a genuinely versatile all-rounder of a mic that punches well above its price.