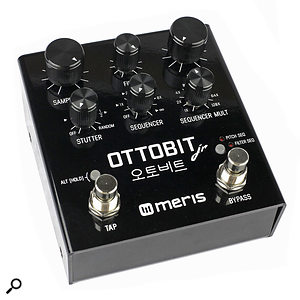 Meris’s 500-series Ottobit offered an interesting and extremely powerful, yet controllable, means of unleashing the destructive effects of digital distortion — and it produced superb-sounding results, as Hannes Bieger discovered in his SOS September 2015 review. So it was almost inevitable that the same algorithms would soon find themselves inside one of Meris’s trademark six-knob, four-switch guitar pedals — but this is more than a simple repacking.

The Ottobit Jr adds stereo operation, a six-step sequencer, a synth-like resonant low-pass ladder filter, triggered stutter effects, 16 preset memory slots and MIDI I/O to the mono original’s variable sample rate and bit-crushing abilities. The I/O connectors are identical to those on Meris’s other guitar pedals: TRS jacks for the switchable mono/stereo input and the L-R stereo outputs, and the configurable connection to either an expression pedal, tap footswitch or to Meris’s four-pedal MIDI interface or four-switch preset access selector.

As with other Meris pedals, the Ottobit Jr’s six rotary controls perform dual functions: each has a labelled assignment, and an ‘unmarked’ function accessed via the Alt switch. In this case, these Alt assignments control the onboard sequencer’s six steps.

In the bit-crushing section, the Sample control reduces the frequency from 48kHz to a minimum of 48Hz, and the Bit knob can drop the digital word length from 24 bits to as short as one bit. Reducing these from maximum to minimum results in a pristine sound quality breaking down into fabulous dirt and noise. A noise gate comes into operation when the word length is reduce below eight bits, to keep the input signal clean. Sweeping the filter across these distortions quickly gets you into analogue synth sonic territory, and the effect of the same combination on percussive sounds is addictive.

Key though the bit-crusher is to the sound, without the sequencer it would be little more than an interestingly different distortion or, with an external expression pedal controlling the filter cutoff, a synth-ish wah-wah. The speed of a sequence is set by the Tap tempo footswitch and modified by the Sequencer Mult control, which doubles the set speed in each of eight increments from 1x to 128x. A sequence is triggered when a note or transient attack is detected in the incoming signal and then repeats for the number of times set by the Sequencer knob. The routing of the sequencer to Pitch, Filter or Sample is set by the illuminated Bypass LED, and displayed on the adjacent small LEDs. 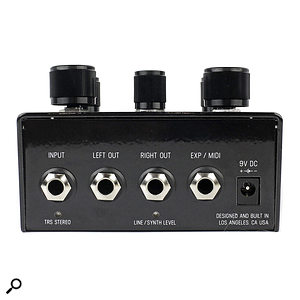 When the sequencer is routed to Pitch, the effect of a rotary control knob’s Alt function is to mute or skip its step, or change the pitch of the triggering sound by ±12 semitones. When routed to Filter or Sample, the effect of the controls’ rotation is calculated as a percentage change (from zero to 100) of the current setting of the filter cutoff frequency or sample rate. For example, a step whose control knob is set at 12 o’clock would reduce a filter cutoff frequency of 2kHz to 1kHz or a sample rate of 24kHz to 12kHz.

The Stutter effect, inspired by 1980s legend Max Headroom, repeats a snippet of audio (captured each time it’s triggered) four times. The Tap footswitch sets the time between the stutter being triggered and starting, and freezes it when held. The Stutter control not only selects the stutter’s speed (1x, 2x and 0.5x) and the number of repeats (1, 2, 3, 4, 6, 8 or 16) but also a random replay of all possible speed/repeat combinations and their reverses.

Although difficult to describe, operation of the Ottobit Jr is very intuitive once you’ve got your head around the workings of the Stutter effect and the sequencer. I can’t think of any other pedal that delivers such creatively useful sound-mangling results, especially once you get into working with presets (particularly given the ability to morph between two versions of a preset) and MIDI CC commands. Since there’s no wet/dry mix, my preference would be to kill the dry signal and treat the Ottobit Jr as a separate instrument, which actually plays to its strengths.

I can see bass/six-string guitarists and synthesists alike absolutely loving the Ottobit Jr, and those who dabble in the dark art of live looping should find plenty of inspiration here too. I can think of no other one-box product at any price that offers what the Ottobit Jr does.