Designed and built in Los Angeles, California, the Hedra is, in essence, a three-voice pitch-shift pedal, in which each voice can be set to a different delay time and different pitch to create some interesting arpeggio-like effects — but that brief description doesn't really do it justice as it goes much further, offering auto–harmony, pitch detuning, pitch glide and various other less obvious functions. 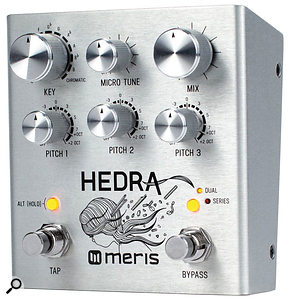 The Hedra can accept a mono or a stereo input and produce a stereo output, and it can also take an optional expression pedal, with which you can make it morph smoothly between two different panel-control settings. It can accept MIDI notes and MIDI Clock via an adaptor cable (connected to the TRS Exp jack), so that you can also 'play' the pitch from a keyboard (up to three additional pitches). And all this comes from a pedal with just six knobs, two footswitches and two buttons! Like other Meris gear, this digital pedal operates using 24-bit A-D/D-A conversion, and processing is courtesy of 32-bit floating-point DSP. Any standard 9V pedalboard PSU can be used, as long as it can supply at least 150mA.

The number of physical controls is effectively doubled by means of the Alt/Hold button, which allocates an alternative set of functions to the controls when held down, and perhaps the best way to get to know this pedal is to take a quick tour of those functions. Key sets the musical key for diatonic harmonies or, when fully clockwise, provides chromatic shifting. Hold down Alt when dialling and you can select a scale type — choosing from Major, Minor, Melodic Minor, Harmonic Minor, Double Harmonic, Lydian Pentatonic and Minor Pentatonic. Note that although the Key and Pitch knobs act as switched selectors, they're not detented, so you do have to be careful where you set them. Micro Tune detunes all three pitch-shifted voices, and an Alt function brings in varying strengths of pitch-correction in the first half of its travel, or pitch-glide in the second half.

It's not intended solely for processing guitars — the designers have added the ability to switch the input/output headroom levels to suit guitar, electronic keyboards or line-level signals.

In its normal mode, Mix does as you'd expect, setting the wet/dry balance — the dry path is digitally controlled analogue. But hold down Alt and Mix becomes a delay feedback control. The way this works depends on which of the four delay modes is set, using the button above the Bypass switch. In the Series delay modes, Alt/Pitch 3 is used as the feedback source, while in the Dual modes, Pitch 1 and 3 both contribute to the feedback loop. Dual mode generates two short delays with a stereo output, while Dual+Series adds cross-feedback. Series uses one delay with feedback, though the second Series option puts the pitch-shifters in the feedback loop — this can produce some pretty gnarly sounds, as the pitch change continues to escalate as the sound recirculates!

In normal mode, the three Pitch knobs set the pitch–shift intervals for the three voices over a ± two octave range, but hold down Alt and they become time-division adjustments, setting the desired fraction of the main tempo. This enables rhythmic repeat patterns to be created. Bypass does as expected with a choice of relay switching or buffering; in Alt mode it enables smoothing of the Pitch knobs. 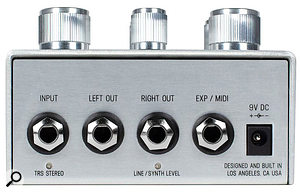 Meris' Hedra might be a pedal, but with this quality of conversion it's not intended solely for processing guitars — the designers have added the ability to switch the input/output headroom levels to suit guitar, electronic keyboards or line-level signals, so it could easily find a home in pretty much any studio setup. I can imagine the Hedra fitting in well with a modular synth system, but it can also do weird and wonderful things to voice too. Such sonic mayhem may not be for everyone but if you are of an experimental nature, there are many beautiful sounds to be had from this pedal, from auto–harmony and shimmering music–box style arpeggios, to detuned chorus, modulated delay, pitch glissandos or hard tuning that strips out bends and slides rather like Auto‑Tune set to stun. Add an expression pedal and you can fake steel guitar slides. Alternatively, you can use the Exp input to connect an external tap–tempo switch. There's also a novel hidden function which is really nice: if you press and hold the Tap footswitch, the sound (both wet and dry) fades in smoothly as you pick each note.

As with most other harmony-type products, anything that requires pitch recognition has to be used with a monophonic input, because on polyphonic sources the pitch-shifting gets very unpredictable. But then most of those effects would sound too confusing if applied polyphonically anyway, so it's not really a huge limitation. And there are still numerous polyphonic options, such as gentle detuning, echo and so on, up to a maximum of 520ms delay time. The Hedra is certainly a bit 'out there', which means it won't be to everbody's taste, but if you're into this sort of thing I have no doubt that you'll love it. In fact, if I wore a hat, I'd take it off to Meris for daring to develop such wonderfully different and engaging effects. They think so far outside the box they'd probably need Google Earth to find their way back inside it again!