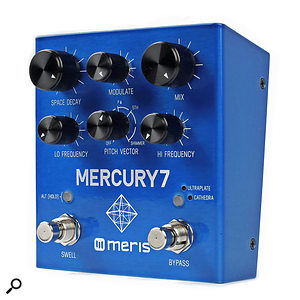 California-based Meris’s Mercury7 mono algorithmic reverb for the 500-series impressed Hugh Robjohns, whose in-depth review appeared in SOS June 2016. The recent repackaging of that device into a reverb pedal brought with it stereo operation at both instrument and line levels and a very welcome drop in price. Other upgrades include a hard or buffered bypass, the ability to store 16 presets, support for continuous controller and program change messages via MIDI, and the facility to interface with external hardware controls.

Although laid out somewhat differently to the 500-series version, the Mercury7 reverb pedal’s control compliment is pretty much identical, apart from the addition of Bypass and Swell footswitches and the means of accessing its presets and MIDI functions. Inputs and outputs reside on the rear panel: you’ll find mono/stereo inputs and L/R outputs on TRS jacks. A further TRS jack enables the connection of an expression pedal, a momentary footswitch, or Meris’s MIDI I/O or four-switch preset selector. Power comes from an included 9V DC switch-mode supply.

Although the Mercury7 pedal is more than capable of delivering a wide range of great-sounding reverbs, it’s the implementation of its control and modulation capability that makes this unit rise above its peers — by assigning an Alt function to every control knob, Meris have delivered the level of control necessary to exploit the Mercury7’s full potential.

In operation, the Space Decay sets the overall reverb decay time by default, but the pre-delay in Alt mode. Modulate both controls the depth of the reverb modulation and, in Alt mode, modifies its speed. The Lo Frequency knob controls the damping of lower reverb frequencies, whilst its Alt function sets the density of the early reflections. Its Hi Frequency equivalent governs the damping of the higher reverb frequencies and, in Alt mode, can also set the depth of vibrato applied to the reverb input. 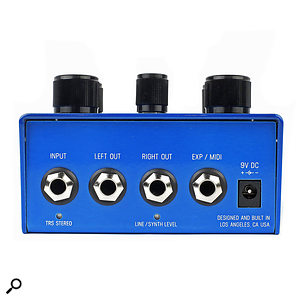 The Pitch Vector control is a major source of ambient atmospherics and selects pitch shifts inside the reverb regenerations, from octave-down, through micro-down, micro-up and fifth-up pitch shifts, to an octave-up ‘shimmer’, all of which interact with the Space Decay, Pitch Vector Mix (Alt-Mix) and Hi/Lo Frequency damping to fine-tune the operation of the algorithm itself. In Alt mode this control sets the attack time of the Mercury7’s auto-swell function, controlled by the Swell footswitch, which also functions as the reverb sustain when held.

The second mini-button, which illuminates when the Mercury7 is active, switches between the algorithm of the fast-build, lush-sounding Ultraplate, and that of the massive, slow-build Cathedra. Last, but not least, in addition to its Pitch Vector Mix role, the analogue Mix control knob sets the final wet/dry balance.

Finally, you’ll need a Meris four-button footswitch to recall the pedal’s first four presets, or a MIDI controller if you wish to access all 16. An expression pedal can also be used to morph between a single (Slot 1) preset and a modified version thereof, both of which can be stored without other additional hardware.

Inspired, like its 500-series predecessor, by the dark soundscapes of the film Bladerunner, the Mercury7 pedal has a sonic character that harks back to the classic Lexicon 224 reverb unit. Whilst capable of creating a multitude of superb-sounding spatial reverbs, the Mercury7 can also deliver a wide variety of atmospheric soundscapes full of textural detail, as well as many more ‘out-there’ synthetic effects — making it equally useful in the studio and on stage.

Although the Mercury7 appears to be positioned primarily as a guitar effect, electronic musicians, keyboardists and modular synthesists will undoubtedly also find themselves attracted by its superb audio performance and the range and depth of its capabilities. The market isn’t exactly short of reverb pedals and this one doesn’t come cheap, but the involving musical experience borne of the complex interactions in the reverb and modulation algorithms differentiates the Mercury7 pedal from the competition — and justifies its price.