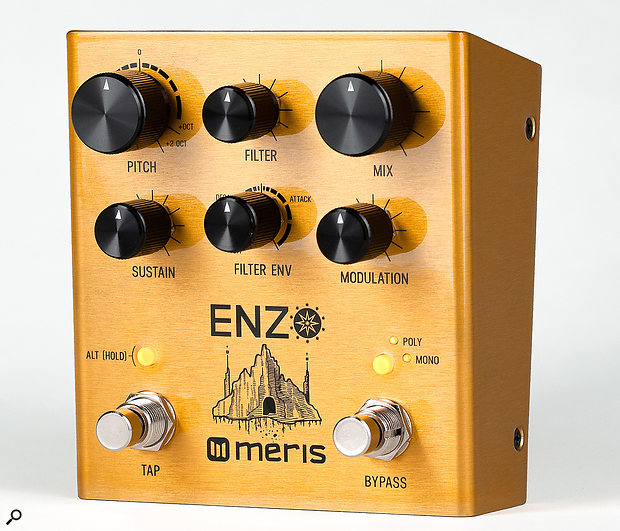 It's difficult to put the Meris Enzo pedal into a specific category, because it combines aspects of a guitar synth with those of an effects pedal. It's obviously intended primarily for use with guitars — and it offers both mono and polyphonic guitar-synth modes — but its filter, pitch‑shift and effects sections can also be brought to bear on other instruments, including drum machines. The stompbox-format housing sports just six knobs and two footswitches, but thanks to an Alt button that provides each control with a second function, the effects that it creates are very tweakable. Power comes from an included 9V PSU and, in addition to a mono input and stereo outputs, there's a further TRS jack for external control. All the processing is digital, with 24‑bit, 48kHz A‑D/D‑A conversion, but the dry signal is kept in the analogue domain.

The synth section can be set to produce square or sawtooth waves, and the filter has numerous modes that I'll get onto shortly. The filter has its own envelope control, and there's a choice of several filter types. The synth sound can also sustain after the guitar input falls silent, though there's no dedicated amplitude envelope control. However, the output can be made to follow the input signal envelope. Other functions include pitch‑shift, oscillator detuning, ring modulator, arpeggiator and delay. Enzo's ring modulation provides carrier-frequency adjustment via an Alt function, with the facility to modulate it via the filter envelope. The modulation oscillator goes from the audio range all the way down to slow tremolo/vibrato speeds. 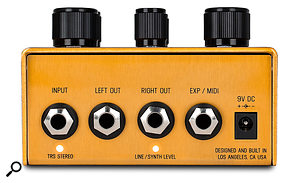 With a suitable external footswitch or pedal, the Exp/MIDI jack socket gives you access to much more functionality.That's obviously a lot to cram into one stompbox, so let's explore at the primary control functions first. The Pitch knob adjusts the pitch of the Synth or Dry signal over a ±2 octave range, and when the Alt button is pressed, it also sets the portamento or glide time. In Dry mode (guitar only, no synth), the filter envelope is used as a pitch modifier. Naturally, Sustain adjusts the sustain of Synth notes, but it also acts as a compressor when in Dry mode. The Sustain control's alternative function is as the frequency control for the ring modulator, again using the filter envelope as a modifier.

As you'd expect, the leftmost footswitch, called Tap, sets the time for the delay and arpeggiator, and this switch's alternative function is to change the filter envelope from Triggered to Envelope Follower. Holding down Tap turns the delay feedback to maximum until the switch is released, which gives you dub-style effects. Alt may also be used to change the filter type — you can choose from Ladder Low‑pass, Ladder Shelving Band‑pass, Ladder High-pass, State-variable Low‑pass, State-variable Band‑pass and State-variable High-pass.

As you might expect, Mix adjusts the balance between the dry and wet signals, unless you hold down Alt — in which case it sets the level of a single delay tap in the first half of its travel and thereafter brings in a second stereo tap. Modulation detunes the two oscillators that make up each synth voice or, in Dry mode, it controls the amount of delay modulation. Its Alt function is to set the delay feedback.

Filter Env adjusts the attack and decay rates for the filter, and allows for both upward and downward sweeps; Alt is here used to switch between low- and high-Q filter settings.

That brings us to the button and two LEDs above the Bypass footswitch. Pressing the button steps through the four operational modes, your choice being indicated by the four possible permutations of the two LEDs. The first is Poly, which allows synth chords to be played but without any pitch bend. Mono turns on the single-voice, dual-oscillator monosynth mode, which does respond to pitch bending but isn't very tolerant of two or more notes being played at the same time. Arp is the next option, and this arpeggiates any chord notes at the rate set by the Tap switch. Finally, Dry turns off the Synth altogether, so that the filter, delay and pitch‑shift effects can be used to process the input signal. No opportunity for control seems to have been overlooked, as even the Bypass switch has an Alt mode — just hold down Alt and press Bypass to switch from sawtooth to square synth waveforms. 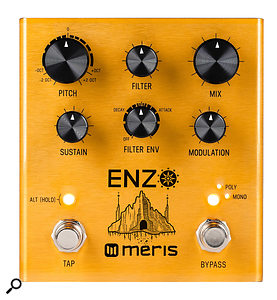 That's already a lot of functionality, but there are also some global settings, which can be accessed by holding switches during power-up. This allows for a Kill Dry mode, which outputs only the synth voices, and you can also configure the expression input TRS jack here; this can be used with an optional four-button footswitch or a pedal, which can be used to morph between two different control setups. The user can also select from buffered or hard (relay-switched) bypass, as well as set the input for line or instrument level, turn the delay tails on or off, and use the two outputs to send the Synth output to one destination (eg. an amp or audio interface) and the Dry signal to another. The unit can also handle MIDI via the EXP jack, using an external four-channel adaptor that can connect up to four Enzo units at a time (there's no dedicated five-pin MIDI socket). All the controls, including the footswitches, are accessible using MIDI Continuous Controllers, and there's also a MIDI Clock sync option. MIDI channels can be set in Global Settings Configuration Mode.

With so many options, wouldn't it be nice to be able to store presets? Well you can — but with a caveat. The Enzo has 16 preset locations, the first four of which are accessible using an optional four-button footswitch. Alternatively, all 16 presets may be accessed using MIDI Program Change messages, and patches can also be saved as MIDI SysEx data. Settings are automatically saved whenever you hold the Alt button and then make control changes, so the current settings will be recalled next time you switch the pedal on. However, in stand-alone mode there seems to be no way to access your presets, which I found a touch frustrating.

The nearest equivalent I can think of to the Enzo is probably Boss's SY-300 guitar synth — that one can also double as a guitar multi-effects processor. While the Enzo is compact and has its own distinctive set of sounds, I find the more costly SY-300 to be more friendly when it comes to storing, naming and accessing presets. It also has a more comprehensive effects section, and it has the advantage of free patch-editing software. There's also the Electro‑Harmonix Synth9, which has fewer bells and whistles but nonetheless sounds extremely convincing. But the Enzo boasts one feature that neither of those can — the ability to sustain notes beyond the length of the guitar note that triggers them.

Sonically, the Enzo produces a range of convincing analogue synth sounds, of the type you'd expect to hear when processing a saw or square wave with a resonant filter. Being able to detune the oscillators makes this all the more convincing, and if you want something a little more wild, the ring modulator manages everything from gentle modulation to outright mayhem. There's also fun to be had with the arpeggiator, while changing the filter type also adds some useful tonal variety.

In Poly mode, the pitch tracking seems very fast and reliable, though it's worth saying that setting the sustain too long can lead to some uncomfortable note clashes when changing chords. Mono mode requires more care from the player — it works perfectly reliably if you only play one note at a time, but if you hit two or more at once, the end result is quite sporadic.

The Meris Enzo is at once genius and frustrating. It's the latter because it requires additional hardware to access the presets, and because you need to keep the quick-start card handy to remind you what the Alt functions do, since they're not printed on the front panel. But perhaps more time spent becoming familiar with it would leave you focussing more on the genius side of the equation! Its use of polyphonic pitch extraction signals the way we can expect guitar processors to evolve, and though the Enzo isn't a real substitute for a good polyphonic analogue synthesizer, it can get surprisingly close to those sorts of sounds, and it greatly extends the range of what a guitarist can do with their instrument.

This is one of very few pedal devices that make effective use of polyphonic pitch tracking to bring guitars closer to the synth world.