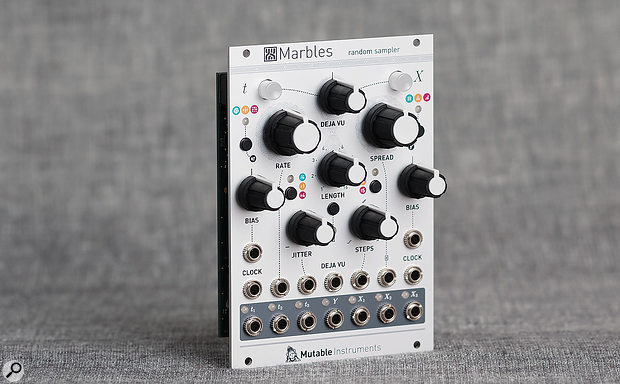 It's hard to imagine any modular system not benefiting from a dash of randomness. In olden times, this typically meant slapping in a module that periodically sampled noise and extracted random voltages. These days, this functionality is often built into LFOs, so any 'random' module needs to do a little more. Fortunately, when it comes to doing a little more, Mutable Instruments are always worth a look.

Marbles offers three streams of triggers/gates and four voltages, to which multiple behavioural characteristics are applied by turning knobs and receiving voltage. The module's left‑hand side deals with triggers and gates, with the opposite side doling out random and not-so-random patterns. Positioned above this architecture is an apparently simple yet effective tool, Deja Vu, which makes it possible to reuse some (or all) of the random seeding decisions. Impressively, none of this is complicated. So while it's worth ploughing through the manual on day one, the rewards are available from the outset.

Connecting an external clock to the module's left side is enough to synchronise Marbles to your modular universe. It also has the effect of turning the large Rate control into a clock divider/multiplier, with the three 't' triggers driving the 'x' voltages generated on the opposite side. You can override this by routing a totally different clock signal to the right‑hand input, synchronising the 'x' voltages to that instead.

Trigger patterns are influenced by a couple of three-option buttons, each supported by tri-colour LEDs. Broadly speaking, the first button determines the type of pattern generated while the second handles the speed relationships to the main clock. Via a virtual coin toss, you decide if the current pulse should be output at t1 or t3, or you can control the opposing triggers so they're based on divisions and multiplications of the main clock. There's even an option to generate typical kick/snare patterns at the t1 and t3 outs.

Depending on the chosen option, the Bias knob can generate extreme speed bursts, or increase the density of triggers at one output while thinning them at the other. And if regular bursts are just too predictable, the Jitter knob is your friend. Handling all clock stability matters, its central position provides jitter-free output. However, depending on the direction you turn from there, the beats will be either delayed or arrive early, like those of a heavily distracted drummer. At extreme values, the triggers hit Brexit levels of chaos and uncertainty.

While Mutable Instruments no longer indulge in hidden features or difficult-to-recall combinations, there are a few 'hold button and turn knob' types worth memorising. For example, if you combine the pattern type button and Bias, you can adjust the gate length of the generated triggers. The same button plus Jitter adds randomisation to the gate lengths — ultra cool for synth bass lines and more.

Given there are CV inputs for Bias, Rate and Jitter, Marbles can be a highly controllable source of tight, funky rhythms, loose yet natural-sounding flourishes or endless varieties of skittering insects, escaping bubbles, etc. And that's only half the story.

Flipping to the other side, the three 'x' outputs produce random voltages or surprisingly musical patterns unlike any regular Sample & Hold. The Steps knob is vital here; the first half of its travel produces slewed voltages which, at the minimum setting, round every step smoothly. You obtain regular, steppy S&H at the centre position, then turning clockwise you encounter scaled voltages, with notes progressively stripped from the scale as you go. The final position generates only voltages corresponding to the scale's root.

There are six preset scales (major, minor, pentatonic, gamelan, Raag Bhairav and Raag Shree), but entering your own from a keyboard or sequencer is a fairly simple process too. Similarly, taking an incoming voltage sequence as a dynamic source is well worth taking the time to explore.

The buttons in this section determine the effect of the panel on each output, as well as the overall voltage range — particularly relevant when generating musical patterns. Continuing with that assumption, Spread and Bias alter the weighting of notes as they're plucked from across the scale.

I should quickly mention the 'y' output too. It acts like a smooth, irregular LFO (-5V to +5V) that runs, by default, at a 16th of the main clock. Several key combinations are on hand to further boost its versatility.

Many of the weird and wonderful phrases and patterns are so good you want to hold and play with them for longer. The final piece of the jigsaw takes care of that. Deja Vu can be enabled independently for triggers and voltages. Turning the knob clockwise you can rearrange existing values, or make use of the left-hand part of its travel to mix some old choices with fresh data. At the knob's mid-point an existing loop continues unchanged — then by using the Length knob, you can play around with it and further modify the pattern from between one and 16 steps.

This module isn't only concerned with random events; Marbles has an uncanny ability to extract musical phrases from the ether. I realise I only mentioned the inclusion of kick/snare patterns briefly, yet groove generation is just one example of the 'giving a little more' ethos. Marbles is a seamless blend of well-chosen functionality — it's wonderful!