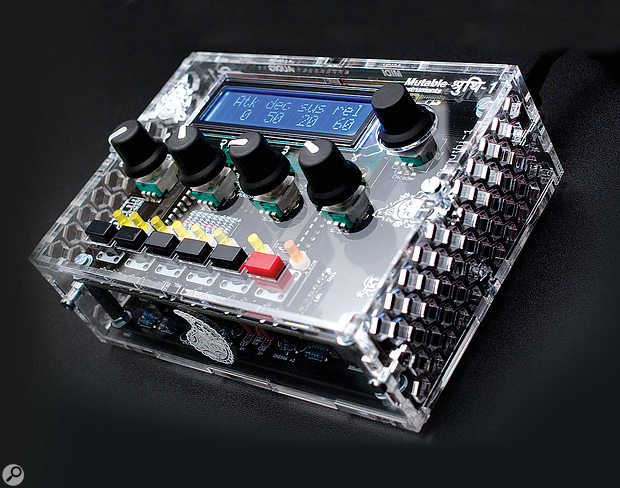 If you're handy with a soldering iron, buying the Shruthi 1 gets you a lot of synth for your buck...

For anyone in search of a monophonic synth module that offers plenty of potential to create new analogue and digital sounds, but which won't break the bank, there's plenty to be found online. Once you abandon wooden end-cheeks and steel front panels for budget 'electronic noise-making' devices, there's a surprising variety available, from bare circuit-board kits to Korg's popular Monotron range, all perfect for adding a host of bleeps, effects and melodies to your sonic arsenal. However, if you want to play your new synth via a MIDI keyboard or sequencer, the choices narrow considerably.

One device that does fit the bill is the Mutable Instruments Shruthi 1, a hybrid monophonic desktop synth module that seems to offer the best of both analogue and digital worlds. Designed in two halves, its first circuit board is all digital, generating the various sound sources, mixing and treatment options, envelopes, LFOs, and a 16-step sequencer and arpeggiator, along with knobs, switches and an LCD display. The second board is all analogue, containing a voltage-controlled filter and amplifier, and the ability to treat external audio. Up to four Shruthi 1 synths can be cascaded for four-note polyphony.

The cost is an amazingly low €140, the only catch being that you have to assemble the two circuit boards yourself. However, after listening to the fascinating sounds emanating from a completed Shruthi 1 kit, I was already hooked.

I've detailed my kit-building experience in the 'Soldering On' box, so let's dive straight into the finished Shruthi 1. It's compact, fits neatly on a desktop, can be powered by a 9V adaptor, or even a 9V battery, features standard MIDI I/O and quarter-inch audio I/O sockets, and can store 144 presets (no writing down patch settings with this one!). Its innards are also surprisingly easy to navigate, via a simple-yet-effective user interface consisting of a rotary encoder, four rotary controls whose functions are linked to the four parameters currently displayed in the 16-line x 2-character LCD display, and a set of six buttons with associated LED readouts to let you move between the various menus. After a few minutes' practice, everything becomes fairly intuitive, and although a very good one-knob-per-function software editor has been created for the Shruthi 1, I found the hands-on experience far more immediate most of the time.

The two digital oscillators are incredibly versatile, playable over a 11-octave range with a wide variety of waveforms, each with variable waveshaping parameters that bring sounds to life once suitably modulated. Of course, you get basic square, sawtooth, pulse, triangle and filtered noise, but there's also a set of eight wavetables and trans-waves ranging from slap bass and bowed cello, through digital PPG-style sounds to tone-bar organs and male voice (and even a user wavetable option for advanced users, so you can download your own creations via MIDI SysEx dump).

However, what really impressed me was the palette of gritty, bit-toggled waveforms (á la Oto Machines Biscuit), sine-wave bit-crushing options, and a set of wonderfully resonant phase-distortion options reminiscent of the Casio CZ series. In addition to this, there's a stack of four detuned sawtooth waves for creating thick pads, basic two-operator FM synthesis for metallic overtones, and even low-tech formant synthesis that can sweep through 14 vowels and two consonants for vocal sounds! You can also fatten things up with a selection of sub-oscillator choices or a transient (click) generator to reinforce the attack of your sounds, and mix in a noise source that can add breathiness or help when creating drum sounds. 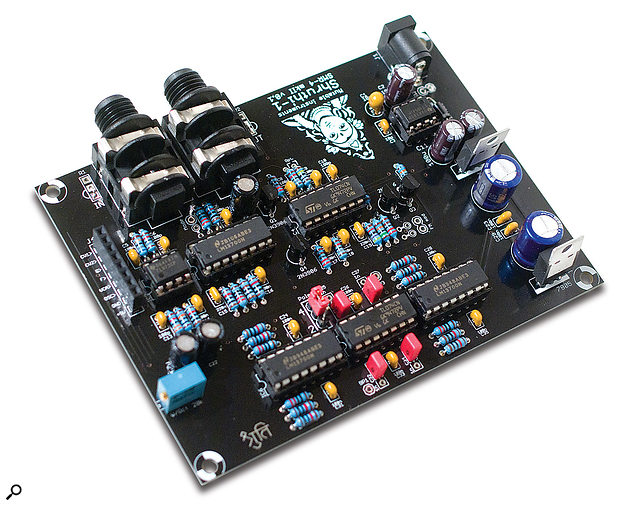 You can simply mix the four sources together, lock them into screaming sync, perform dalek-inspired ring modulation, or apply more extreme transformations, such as fuzz or foldback distortion, sample-rate reduction for added grunge, and various stepping modes that play Osc1, Osc2, Sub and Noise in turn, for simple sequences. A recent free firmware update for existing users added a duophonic function, so you can play the two oscillators on different MIDI notes simultaneously. This is a classic example of the smaller developer being able to respond to user feedback.

Two ADSR envelopes, a pair of versatile LFOs, a 12-slot modulation matrix and various digital 'operators', such as max, min, quantise and lag, for massaging those modulation signals into different shapes, left my head reeling with design possibilities. There's even a versatile MIDI-syncable 16-step sequencer and arpeggiator.

This rich digital mix now passes into the analogue board, where you can also treat or mix in an external audio signal. The SMR4 MkII filter included in the standard Shruthi kit is a four-pole, resonant, low-pass design that sounds very good indeed, to my ears: it's very solid and slightly overdriven, with a sweet, round resonance that's close in character to classic Roland designs. However, for more advanced builders, a selection of alternative filter boards is available, including one offering buckets of Polivoks-inspired character, and the amazing Mission four-pole, whose 15 filter shapes and four resonance choices put many more expensive synths to shame.

The Shruthi 1 can sound very digital when required, but don't run away with the idea that it's clinical: there's enough on-board grit and waveform imperfections to add real character, and it can also sound very analogue — especially once you add some acid filter squelch — as well as mimicking hybrids such as the PPG Wave and Ensoniq ESQ1. The modulation matrix is surprisingly versatile, especially in conjunction with the random patch function, which often generates sounds that you wouldn't have programmed by yourself in a month of Sundays, although it's the only area where the user interface becomes slightly trickier to visualise overall.

Overall, I have to say that I am very impressed with the Shruthi 1, and am still only scratching the surface of its programming potential. It really is a Tardis of a synth, with an extremely versatile set of internal functions that bely its modest dimensions, while its interface is thought out well enough to make it fun and hands-on. The Shruthi 1 probably won't suit the purists who insist on examining every waveform with an oscilloscope, but if you use your ears and like some character in your sounds, it's very hard to beat at the price.

If you're after a small ,desktop, MIDI, monophonic synth, there are various other candidates to audition. As its name suggests, the MeeBlip (http://meeblip.com) concentrates on more computer-style sounds, with a basic two waveforms and no patch memory, but does provide one knob per function and is very easy to put together. PreenFM (http://sites.google.com/site/preenfm) is another budget desktop offering, this time based on a Yamaha FM chip, but of course sounds very different. Another rather more expensive monosynth that regularly gets compared with the Shruthi 1 is the Dave Smith Instruments' Mopho (www.davesmithinstruments.com).

Each of the two boards in the kit took me a couple of hours to assemble carefully. You need a soldering iron, some basic soldering skills and a few small hand tools, but nothing out of the ordinary. There's a detailed step-by-step guide on the web site, with a few tests and adjustments along the way to make sure everything works OK. The components for each board are sorted into separate bags, to minimise confusion, and the majority of integrated circuits are socketed for easy replacement if you get anything wrong. My kit worked perfectly first time, and a census at the Mutable Instruments forum also proves that plenty of complete beginners have also successfully managed the build. Even if you do experience a problem, there's a raft of on-line troubleshooting tips to refer to (distilled from previous user mistakes), as well as plenty of helping hands from other users on the forum.

What is perhaps unusual is that the Shruthi 1 is not supplied with a case by default, largely because so many DIY enthusiasts like to design or customise their own. A low-cost yet attractive case made of 3mm transparent acrylic sheet is available, but you can also regularly buy case 'specials' via the Mutable Instruments forum, in a whole rainbow of acrylic colours and levels of transparency, if you fancy something a bit different. A metal enclosure may also become available at a higher cost if there's sufficient demand.

If you have no intention of wielding a soldering iron, Mutable Instruments will occasionally hand-assemble a batch of Shruthi 1 synths with gorgeously different case and display colours, such as the translucent white case and blue display of the versatile Four-pole Mission and the all-red Polivoks editions offering bags of Russian attitude. These limited-edition versions retail at around the €300 mark, and tend to sell out very quickly.

If you're handy with a soldering iron, the Shruthi 1 is the cheapest way I know to get hold of an incredibly versatile, MIDI-driven monosynth.