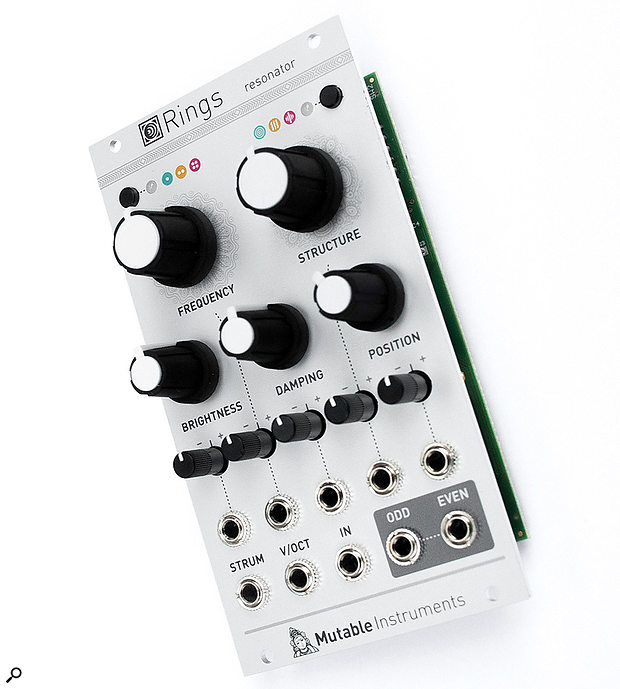 Mutable Instruments’ Rings introduces the idea of virtual strings to generate its own flavour of polyphony.

Familiar from the outset, Rings closely resembles the resonator section of the Elements module. It supports three resonators: physical modelling processes that take unpitched sounds such as clicks and plucks and generate harmonic, musical tones in response. Well, mostly. Sometimes the resonances created are metallic and inharmonic, just the job for percussion, tuned or otherwise. Rings does strings — and so much more!

Two buttons toggle the module’s polyphony and choice of resonator. For the former, you have a choice of one, two and four simultaneous notes, but you won’t see separate CV inputs for each voice, nor audio outputs. Polyphony in this sense means that several notes are heard at once, their tones decaying together like the strings of a guitar or harp. The trigger input, which responds to voltage or audio pulses, is even named ‘Strum’ to reinforce the idea. The duration of ringing, which is convincingly non-synthetic at times, is set by the Damping control over a range 100ms to 10s.

The top right-hand button toggles between the resonator states, each indicated by a colour: green, amber or red. Vital here are the Structure and Position knobs, with each behaving differently according to the selected resonator. Spinning the Structure knob is a smooth and satisfying experience thanks to a slew process that wards off the otherwise rough and ugly transitions. Similarly, some of the CV inputs also have a slew limiter, preventing clicks and removing A-D conversion noise which would otherwise rough up the sensitive internal parameters. Of the other controls, Brightness sets the level of upper harmonics, turning simulations of glass and steel into wood and nylon as you turn anti-clockwise.

First up is the Modal Resonator. Similar to the resonator of the Elements module, it mimics the resonances of various vibrating structures — strings, plates, etc. The Structure control sets the frequency ratio of generated partials and delivers an assortment of plucked strings until approximately its mid-point, where the output becomes more bell-like. Chimes, electric pianos and xylophone-ish creations are all easily achieved too. By tweaking the Position — the point on the virtual surface at which the exciter is struck — the output becomes more nuanced, giving a tangible sense of an object being hit in different ways.

Sympathetic Strings follows, modelling the resonances that occur not in strings that are struck directly, but in those nearby. The Structure knob sets the intervals between the sympathetic strings. Natural-sounding phasey sweeps appear when you feed random voltages into the Position’s CV input. Supply an LFO and you get rich chorus. This can be the most subtle of the resonators, producing sonic images of not-yet-invented string instruments as well as acoustic guitars, kotos and sitars, with a smattering of FM-style jangling harpsichords and clavinets en route. Adding randomness to the Structure CV input is not for the faint-hearted though, the string detune effects instantly erasing my claim of subtlety.

Regardless of the selected resonator, stimulation — in the form of an exciter signal — is required to produce musical tones. Ideally, it should be introduced via the audio input, and I got plenty of mileage from analogue percussion, synth blips, white-noise bursts and even vocal samples. Pretty much anything is worth a shot, and if you don’t supply an input, Rings will create a suitable signal for you automatically. This might seem like a limitation if you’re used to the triple exciter engine of the Elements*, but I found it liberating. Even working with only the default internal exciters, the potential is enormous.

Signals — audio or voltage triggers — sent to the Strum input initiate new notes. They don’t need to have any correlation with the (1V/oct) note voltages received at the pitch input. In fact, you don’t actually need triggers at all; Rings will helpfully generate a note for every new pitch it detects at the input. However, if you do dispense with them, you’ll notice that repeatedly playing the same note won’t generate any new triggers.

The output stage offers a useful stereo split. It’s divided into odd and even outputs that behave differently depending on whether Rings is in mono or poly mode. When mono, the outputs carry odd and even numbered partials from the Modal Resonator, or the de-phased components if either of the others is selected. In poly mode, the outputs switch to the odd and even numbered strings or plates, which is lush, trippy and an easy justification for that extra mixer channel.

At approximately half the price of the Elements, the compact (14hp) Rings is way more than just its ‘resonator bit’. Polyphony brings qualities not attainable with the older module — qualities well suited to the type of instruments being synthesized (there aren’t many single-string guitars after all!). Stripped down to a trio of resonators, Rings might have felt underwhelming after the more complex Elements. Instead it’s something of a bargain, with almost every combination of its settings producing gold.

*The Elements module has the same CPU power available, but spends it not on polyphony but on reverb, multiple exciters and a slightly more complex resonator. Rings’ extra resonators were added to it in firmware version 1.1.