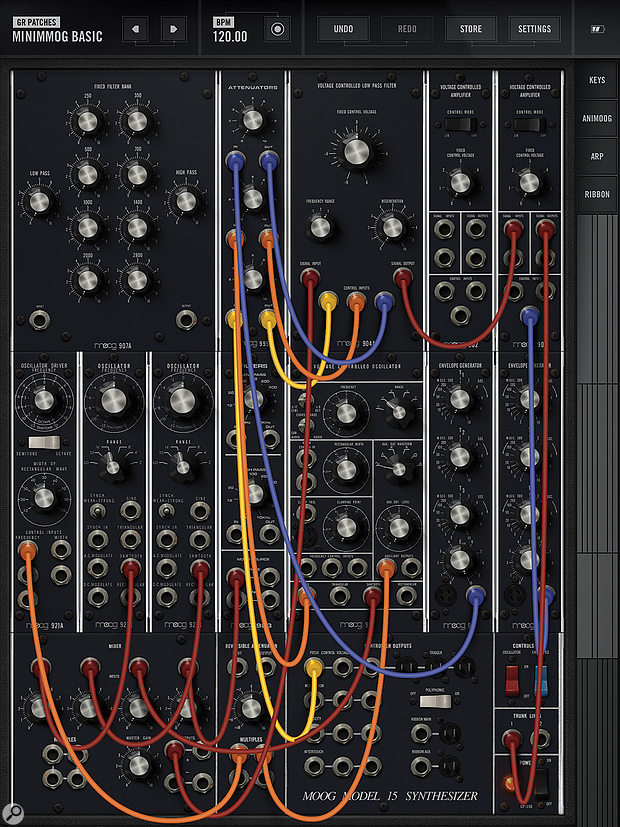 This four-voice polyphonic Model 15 app, which is both an educational tool as well as a musical instrument, mimics the original (primarily monophonic) Model 15, and offers much more besides.

Last year I had the opportunity to play the Moog System 55, System 35 and Model 15 while they were sitting next to each other and discovered that, while all sounded fabulous, there was something a bit special about the Model 15. Unfortunately, it’s a small system that lacks much of the flexibility and capabilities of its larger siblings so, while I may have preferred its underlying sound, there were many times when I was unable to do what I wanted with it. But today, the four-voice polyphonic Model 15 app, which is being offered as an educational tool as well as a musical instrument, mimics the original (primarily monophonic) Model 15, and offers much more besides.

You only have to look at the Controller Outputs section of the synth’s CP-15B module (which now offers three CV outputs for each of pitch, modulation, velocity and aftertouch) to see that it’s going to be a much more flexible and expressive beastie than the original. Scrolling down, you’ll also find an extra row of modules including two additional bi-polar voltage-controlled attenuators, two dual-in/out amplifiers, and a ping-pong delay with CV control of time, feedback and mix. Alongside these, you’ll find a four-channel Audio Bridge module that allows Model 15 to access audio from other iOS apps so that you can use it as a signal processor, and to send audio to other apps, allowing them to process or record the output from the synth. Alongside this, there’s a MIDI Bridge that provides six 14-bit MIDI inputs and outputs, and the two modules together provide a wealth of connectivity.

The extension cabinet also includes an audio recorder. It’s not a multitrack, but you can overdub using different sounds for each layer which, if your playing and timing is good enough, allows you to build quite sophisticated pieces that you can then share as WAV files. In fact, you have to share them or lose them — the audio is stored in a buffer that’s cleared when you close the app.

By the time that Model 15 was announced, I had already programmed many patches for it on my iPad Air and, although it was still being refined while I was working with it, I found the GUI to be clear and well thought out. Details such as how many fingers were needed to carry out certain operations were updated, tried, and updated again until Moog’s engineers were happy that it was as pleasant and efficient to use as possible. My only remaining gripe is that many of the modulation controls and amplifiers are scaled such that the most useful range lies between zero and just a tad more than zero, which means that you have to have very steady fingers, even when using the fine movement shortcut. Indeed, I often found myself using two attenuators to force a modulation signal down to the amplitude I wanted and, without the ones in the second cabinet, many of the sounds I was developing wouldn’t have been possible. What’s more, I sometimes found that Model 15 lacks sufficient mixers, as do almost all pre-populated modular synths. I know that, until people start using these synths in anger, they prefer to see more oscillators, filters, and other sexy modules installed within them, but they soon find that a lack of mixers can be rather limiting. I wonder whether we could persuade Moog to add another row of modules containing nothing but mixers and VCAs?

In addition to the two cabinets, Model 15 offers four additional pages accessed by tabs found to the right of the console. These include a polyphonic keyboard that emulates velocity and pressure sensitivity using front-to-back position and by sliding your finger on the key (respectively), plus an Animoog keyboard that adds side-to-side expression to this. If you don’t have access to a well-equipped master keyboard, you can use these to surprisingly good effect. There’s also a highly specified arpeggiator that, in addition to the usual octave range and direction controls, allows you to program things such as pitch offsets, velocity offsets, gate length offsets, and more. Consequently, if you just arpeggiate a single note, you can use this as an eight-step sequencer. Finally, there’s an emulation of the Moog 1150 ribbon controller that generates two CVs with Gates, all of which you can patch into your sounds via the CP-15B.

So how does it sound? The answer, as you would hope, is that it sounds damn good. I’m not sure that it has the rawness of a genuine Model 15 (in fact, I’m fairly confident that it doesn’t), but it has a strong character that it imposes upon almost everything that it does. This may or may not be to your advantage. If you allow the synth to channel your sound design, it will guide you down the same paths as a genuine Moog modular: muscular lead synth and bass sounds, powerful effects, and fascinating arpeggiated patches. If you ask it to step beyond those boundaries, life becomes harder but it’s worth it. I spent a lot of time persuading it to imitate orchestral instruments, polyphonic keyboards and percussion, and the results were sometimes more than satisfying. Model 15 is an instrument that will reward the time and effort you spend on it, although you may (like me) become greedy and wish that its polyphony were greater.

Nobody can accuse Moog Music of ignoring any sector of the synthesizer market. From the most expensive synths currently on offer to some of the most affordable apps on the market, the company cover all the bases. Costing just £23$30 (which is 0.3 percent the cost of the $10,000 Model 15 hardware, which lacks all of the extra modules and controllers), the Model 15 app is eminently affordable. For the price of a large pizza and a bottle of something fizzy, it’s far too much fun not to try.