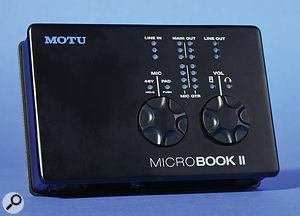 In 1877, the only way you could hear music being made and songs being sung was to be in the physical presence of the musicians. By the very next year, an analogue technology developed by Thomas Edison changed all that, and the repercussions of that change are still breaking around our ears.

Over the last 135 years, the inexorable advance of technology has enabled the miniaturisation and digitisation of the major elements of audio recording. This process, together with parallel developments in computer software, has transformed our interface with the recording process from the acoustic horn and wax cylinder of Edison's original phonograph into today's audio interface and computer.

Founded in 1980 and inspired by the first Macintosh computers, MOTU were early entrants into computer audio and nowadays produce some 55 products in that field. Their latest offering, the 4-input/6-output MicroBook II, is a USB 2 audio interface with internal DSP, which upgrades and replaces the company's original Microbook. Included with the unit are the latest versions of both MOTU's cross-platform CueMix FX mixer application, which configures and controls the MicroBook II, and their Mac-only AudioDesk DAW.

The MicroBook II is a compact, chunky unit and, as its name suggests, is about the size of a thick A6 notebook. The front edge carries a balanced XLR mic input (input 1), a mono, high-impedance guitar input (input 2) and a quarter-inch stereo headphone socket. The rear of the unit is where we find the USB 2 connector that provides bus power from, and communication with, the host computer; an S/PDIF RCA phono output; paralleled stereo mini-jack and two quarter-inch balanced jacks for the line ins (inputs 3 and 4); a stereo mini-jack for line out (outputs 3 and 4); and the two quarter-inch balanced jacks of the main outputs (outputs 1 and 2).

Input/output metering and the unit's twin rotary encoders, along with their associated LED indicators, sit on the right-hand side of the panel. At the top of this grouping, a pair of three-LED meters display the level of the stereo main out bus. On either side of these, a pair of single-row, three-LED meters cover line in and line out metering respectively. Directly below the main out meters, two single-row, four-LED meters display the levels of the mic and guitar inputs.

Both rotary encoders incorporate push switches that enable control of the MicroBook II's limited onboard hardware functions. On the left, the Mic encoder digitally controls that input's 51dB of analogue gain and can also switch in the 48V phantom power and a -20dB pad. The Vol digital encoder sets the 32dB of analogue gain available to the guitar input and can be switched to control the levels of the main out and/or the headphone output. The status of the function switching is shown by the encoders' associated LEDs.

Since the MicroBook II is a 'plug-and-play' device, installing the included software on both Mac and PC was an absolute breeze: read the manual, insert the supplied CD and follow the on-screen prompts. In both cases, the MOTU Mac and Windows audio drivers and the CueMix FX software installed faultlessly. The Windows installation, as usual, required driver installation before connection of the MicroBook II, while over on the Mac, the additional installation of the AudioDesk DAW (which won't be a part of this review) proceeded without a hitch.

Setting the MicroBook II as the audio device for a selection of leading audio software programs is comprehensively covered in the manual. I didn't have any trouble with any from that list that reside on my hard drives, and neither did I find any problems with those programs in my collection that didn't make the MOTU manual.

A modern USB audio interface like the MicroBook II is capable of producing great-sounding recordings, and this potential is more than borne out in practice. The microphone preamp sounded clean and uncoloured, and coped admirably with an assortment of dynamic and condenser microphones, on both vocals and acoustic instruments.

The high-impedance guitar input is designed to correctly load both passive and active guitar pickups for direct recording or for use with guitar modelling software, although MOTU do recommend that you connect their ZBox guitar impedance converter to this input if you'd like to have more of the sound and feel of being plugged into a 'real' guitar amplifier.

The line inputs handled effects units, preamps and a CD player with nominal levels ranging from -10dB to +4dB quite happily. All internal processing runs at 24-bit and supports 44.1, 48, 88.2 and 96 kHz sampling rates. Overall, the MicroBook II's audio performance is absolutely excellent.

However, the MicroBook II is much more than just a very good 4-in/6-out USB audio interface, as you see when you begin to delve into the CueMix FX software, which gives you access to the unit's front-panel controls and its internal DSP. All hardware and software settings — including the microphone and guitar preamplifiers' digitally-controlled analogue input gain — can be saved as Configurations, which allow you to build up a library of presets to cover a variety of situations.

CueMix FX divides the MicroBook II's DSP functionality into three main tabs: Inputs, Mixes and Outputs. The Inputs tab is where you set up and trim not only the mic and guitar inputs, but also the Line Inputs. The Mixes tab lets you build up and balance four separate, simultaneous mixes using the live inputs (Mic, Guitar and stereo Line) and the stereo USB audio return (which is labelled as Aux 1) from your computer. This allows you to have separate mixes for your main monitors, cue mix, headphones and the computer input. A nice touch in the Mixes section is that you can reconfigure the stereo line input as a Mid/Side pair if you have a suitable external microphone and preamplifier setup. The Outputs tab is where you set up the mixes that feed the four physical stereo outputs (including the S/PDIF output that merely mirrors the Main Out mix). Each of the four individual physical outputs — including the S/PDIF one — has its own dedicated meter and level control.

Any CueMix FX channel (input or output) can be assigned, via its Focus button, to a separate set of tabs that enable you to view the channel's meter and switching, and to assign and control the MicroBook's onboard DSP — a five-band, fully parametric 'British' EQ with high- and low-pass filters and a fully-featured compressor. Also found within this set of tabs is a signal generator capable of producing sine waves plus pink and white noise, each of which can be inserted into any of the three physical outputs to help test or calibrate a system,

Alongside the four hardware output channels that can be routed as input sources to the computer, CueMix FX allows you to access an additional pair of auxiliary Scope/Return channels that can also be assigned as track input sources for the computer. The sources for these channels are defined in CueMix FX and can be any individual input, mix, output (including the headphone out) or selected Focus channel. In addition to their Scope use (which we'll come to in a minute), these channels can function either as clean feeds alongside an effected mix during recording, or as a separate recording mix of a live gig where the MicroBook II's Main Out is being used to feed the PA and its Line Out is being used to drive floor monitors.

Putting all the above into the mix turns the MicroBook II into an extremely practical combination of audio interface and digital mixer and opens up the possibility (for a solo artist, or even a duo) of playing gigs with just a vocal mic, instruments, a computer (either as playback or recorder), a MicroBook II and powered loudspeakers for front of house and foldback, or even in-ear monitors driven from the headphone outputs.

It was at this point in the review process that I started to set up an imaginary gig on my Mac using Garageband playback instead of the tracks on my PC that I'd been playing around with earlier, and discovered that I couldn't route that program's output to the Aux 1 software return in CueMix FX. I was initially confused by iTunes quite happily routing back via Aux 1, but a call to the UK distributor's excellent customer support confirmed this. There doesn't appear to be a workaround, either, so if you want to mix a pre-recorded Garageband multitrack with live sources, you've pretty much had it unless you first premix your tracks into iTunes.

Incidentally, there's a third-party remote-control iOS app (TouchOSC) that controls the CueMix FX software, and this really opens up the possibility of using the MicroBook II in a live situation with a sound engineer mixing the gig via an iPad. That I've got to try sometime soon!

Back in the real world, the CueMix FX software has a suite of additional functions that allow you to not only tune your instrument with great accuracy via the MicroBook II, but also to view signals routed to the Scope bus in a new light.

In addition to the tuner — which is capable of tuning phase-coherent stereo signals — you'll find an oscilloscope; an FFT frequency analyser with spectrogram display; a phase analyser that graphs frequency versus phase differences versus amplitude on rectangular or polar co-ordinates; and an X/Y Plotter that graphs the left channel on the X-axis and the right channel on the Y-axis, to show you where there may be phase issues. There's a much more detailed explanation of all the features and functions of these useful extras on the MOTU web site, and I'd encourage you to check it out.

For me, the MicroBook II, with its on-board DSP and CueMix FX control software, seems to be targeted at the singer/songwriter/musician sitting in front of his or her computer DAW with a vocal mic, a guitar, and perhaps an external mic preamp, stereo keyboard, looper or guitar synth at his or her disposal. The CueMix FX software is a little gem that helps the MicroBook II stand out from the crowd, even although the extra audio analysis software, while being extremely useful to the more technical user, is probably overkill for the average musician.

The MicroBook II combines a high level of audio performance, practical software and hardware features and functionality, to deliver an attractive piece of kit, especially given its price. If you find yourself sitting in front of your computer contemplating a new audio interface and you don't need a multitude of inputs and outputs, there's an awful lot to be said for buying a MicroBook II.

There's certainly no shortage of competition in the MicroBook II's price range, but there's no absolutely direct equivalent, so you'll be looking at the Focusrite Scarlett 8i6, Avid's Mbox Mini Pro Tools Express, the Steinberg Ci2+ Production Kit and Native Instruments' Komplete Audio 6 to find similar features and functionality.

The MOTU MicroBook II is a unique mix of 4-in/6-out hardware USB 2 interface, on-board DSP and control software. This high‑quality combination of audio interface and small-scale digital mixer would particularly suit solo artists who are looking to use their computers for both recording and live playback and mixing applications.