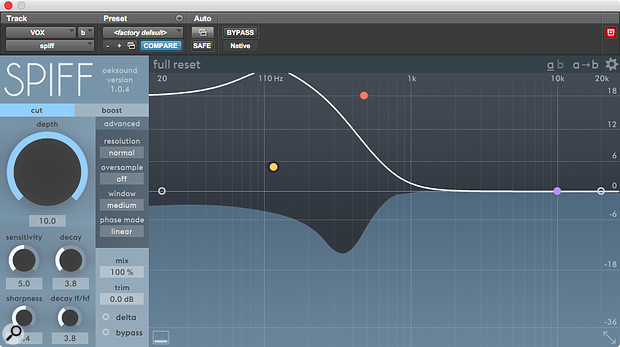 Oeksound's Spiff represents a new take on transient processing, which opens up some intriguing possibilities in mixing and mastering.

I didn't take much persuading to take a look at the second release from Finnish company Oeksound. I'm still a regular user of their first offering Soothe, which is designed to help tame harsh or uneven recordings, and which I summed up in my SOS June 2018 review as "a very clever and powerful mix tool". Spiff is described by its makers as their take on transient control, and offers the user extremely detailed control over the transient content of an audio signal.

There are, of course, plenty of transient processing tools available these days, but even the most sophisticated implementations usually only allow you to process the entire signal or, at best, to divide it into a few broad frequency bands. Oeksound claim, however, that Spiff uses "intelligent processing" to analyse and adapt to the incoming signal and process only the parts that have relevant transient information, allowing them to be boosted or attenuated in a clean fashion that's free of artifacts.

The styling and layout of Spiff are similar to Soothe, and in both cases I would recommend spending a few minutes looking at the manual before getting started. The majority of the action takes place in a real‑time graphical display that allows you to steer the dynamic processing towards your desired area of the frequency spectrum. This is achieved through five EQ‑style bands, each with controls for frequency, bandwidth and sensitivity. Two of the bands target the high and low frequencies, while the remaining three bands are more 'parametric', allowing you to pinpoint areas that you want Spiff to target. 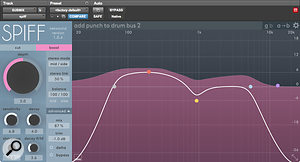 Spiff can be used in boost or cut mode, but this is a global setting rather than one made per band.The plug‑in also has a number of global controls, the most significant of which is the option to work in Cut or Boost mode, where transient information is respectively attenuated or enhanced. There is also a Depth control, which acts as a master threshold for how hard you want the plug‑in to work, along with various options for fine‑tuning the feel of your dynamic control with names such as Sharpness and Decay. Also worthy of a quick mention is the very useful Delta control, which lets you audition the difference between the processed and unprocessed signal so that you can hear what Spiff is adding or taking away. A mix control allows you to use Spiff in parallel if you wish.

Cut To The Chase

This will be the last time I mention the Soothe plug‑in, I promise, but if you're coming to Spiff because you're a fan of its older sibling, it's worth mentioning that it presents quite a different user experience. This isn't a plug‑in that you just slap on and let it do its magic, but one that requires you to negotiate a bit of a learning curve — which isn't a criticism, just an observation for those who are already familiar with Soothe. 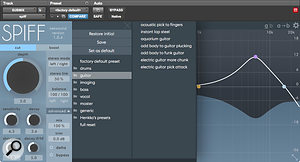 Spiff comes with a range of presets for tasks that go way beyond conventional transient control.My first use of the plug‑in was on a mastering job, where it did a subtle but effective job of bringing back a bit of the attack on the kick and snare that were being lost through limiting. Spiff was positioned before the final limiter in the chain, and I used the 'Add dynamics to master' preset as a starting point, directing the processing to target the key areas of the drums. The plug‑in was set to Boost in this scenario and I then used the blend control at around 50 percent wet to avoid overdoing things.

This was all very impressive, and I couldn't wait to try Spiff in a more targeted way within a mix. When I did so, though, I was surprised to find that I often couldn't get it to really earn its keep on individual drums on a live drum kit. I could get it to do some really dramatic changes, but I definitely found it more effective as a tool to shape a drum loop, for example, and as a tool to fix or enhance rhythm tracks that were already pre‑defined in some way. This became a bit of a theme as I started to find uses for it on things other than drums — which is where one might think a transient processor would be most useful. It was great for pulling out a bit more definition on a picked acoustic guitar part, for example, and equally effective in reverse on a nasty‑sounding DI'ed bass guitar track I was mixing.

I had a couple of voiceover jobs during the review period that were quite hectic sessions, involving different actors doing short parts around the same microphone. It's always an issue in these sessions that you often have to let things roll a bit more than you'd like, which means you sometimes have to deal with the odd heavy plosive or sudden breath after the recording session. I found Spiff to be excellent for this kind of work, and by enabling the Delta function, I was able to identifying a common area where plosives were most prominent and reduce them with an amazing level of control and transparency. In this scenario, you would have Spiff set to the Cut setting, and you can get very detailed indeed by playing with the Sharpness and Decay settings. It offers a similar level of control on sung vocals, and if you work in any genre that requires very detailed vocal processing — to fix side‑effects from very heavy compression, for example — then I think you could find a lot to help you here. In all cases, though, I had to put in some work to get Spiff to do what I wanted; again, this isn't a criticism, but is important to point out if you have a short attention span with plug‑ins and are allergic to documentation!

We live in an amazing time for digital audio, and Spiff is the latest in a steady stream of tools that are pushing the boundaries of what is possible in terms of audio processing. Oeksound's latest offering is an intriguing and very modern plug‑in that allows unprecedented levels of manipulation over the transient information in your audio. The best ways to harness this power are not always obvious, but I found it to be a good problem solver, and got great results using it as a subtle enhancer for congested material that needed more transient definition. In nearly all cases, it took a little time to get the right results, so I recommend some patience and experimentation. Oeksound offer a generous 20‑day fully functioning trial period, which should hopefully give you enough time to get to know if Spiff is a tool that meets your needs. I think it is well worth investigating, and I can imagine myself using it more and more as I get to know its possibilities.