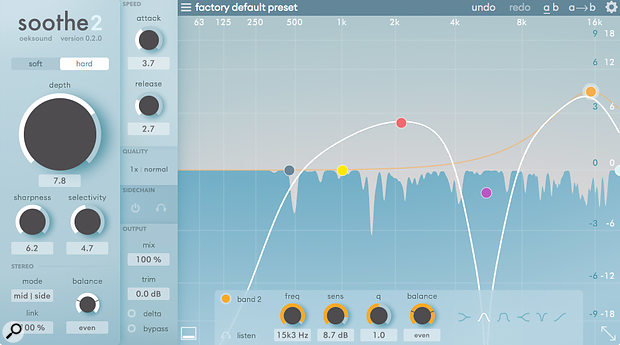 Oeksound's Soothe has quietly taken the world by storm. We road-test the hotly awaited v2!

In a fanciful way, the world of plug-ins resembles the music business. You've got your prolific major-label acts, kept in the public eye by consistent high production values and lavish marketing budgets. You've got your indie artists, toiling away in obscurity for the love of the music. And just occasionally, one of the latter breaks through into the mainstream and releases a smash hit.

You could certainly apply this narrative to Finnish developers Oeksound, who made their debut in 2017 with Soothe. Described as a "dynamic resonance suppressor", it was intended to counteract the harshness and edgy qualities that are sometimes associated with digital recordings (or, let's face it, with plain bad recordings). It wasn't quite the first plug-in to attempt this, but word quickly spread that Soothe was by far the most successful. Both in music and post-production, Soothe is now widely perceived as a must‑have, and for good reasons.

All of this means that Soothe 2 arrives with a weight of expectation that did not attend the original. It's obvious from the 'new features' list that Oeksound have taken this expectation seriously, and have tried to deliver a substantial update. Is this an essential upgrade to an essential plug-in?

The Soothe code base has been completely rewritten, with quite a few 'under the hood' improvements underpinning the new features. The plug-in's latency has been roughly halved, to around 45ms, and the already modest CPU load of the original has been lowered. CPU burden is also reduced by a new ability to set a higher quality mode for offline renders than is used in real time, so that you get the best possible quality when bouncing your mix, and by revised graphics coding that offlloads more of the work onto the computer's GPU.

Soothe's processing is presented in an EQ-like interface that allows you to focus it on the frequency ranges that need it most. This analogy has been developed further in Soothe 2, with bands now offering a wide range of shapes including shelving, tilting and notch filters. The entire plug-in or individual bands can operate in M-S as well as L-R mode on stereo material, and it's possible to freely weight the processing towards one side of the stereo signal, both globally and per band. And whereas the original Soothe was essentially a mid-range and high-frequency processor, Soothe 2 can do useful work at the bottom end too.

It's now possible to specify separate quality settings for real-time and offline use.If Soothe's resemblance to an EQ is heightened, so too is it now more like a compressor, in that you can specify attack and release times to govern the processing. In the original, response was pretty much instantaneous: unwanted resonances would be eliminated as soon as they started and for as long as they lasted. The ability to set a slower attack time has obvious applications, especially on drums. The brain doesn't really have time to register that the initial impact of a snare hit might contain nasty overtones, but they can be very noticeable in the decay, or in cymbal bleed between hits. Oeksound say that slower attack times can help reduce artifacts on some material.

Another compressor-like feature is the provision of a side-chain input. Again, this has several potential applications; for example, if one instrument within an ensemble is sounding harsh on the room mics, you could employ Soothe 2 on the room mic track, but trigger it from that instrument's close mic. Given that Soothe can cut away mid-range in a pretty drastic fashion if you push it hard enough, you could also use a similar technique to carve out space for a vocal in a wall of guitars. In practice, the usefulness of this feature is somewhat limited by the fact that not all DAWs properly implement delay compensation through side-chain paths; if yours falls down on this, you can still get good results from 'broad brush' applications, but detailed harshness removal won't work particularly well.

The biggest development, though, is the addition of a second processing algorithm. Soothe 2 can operate either in a Hard mode, which is similar to the original, or the new default Soft mode. This is said to be "more autonomous, easier to use and faster to set up", as well as being less level-dependent. Both modes retain the original's core parameters of Selectivity, Sharpness and Depth, all of which are highly intutitive once you see and hear Soothe working.

There's only one major down side to all this newness, which is that Soothe 2 is not backwards-compatible with the original. For existing Soothe users, version 2 will be installed alongside the older version, which will continue to work so that existing projects can be loaded unchanged.

...version 2 is a triumph. Without noticeably adding to the plug-in's complexity or slowing down the user, Oeksound have found numerous ways to make it more widely applicable, more controllable, and more appropriate to more sources.

As Neil Rogers said in his review of the original version, Soothe is highly addictive. Because it almost invariably does nice things to any individual source, it's important to use it with the mix as a whole in mind; sometimes the grit and edginess that Soothe removes is actually what an instrument needs in context. Having got that caveat out of the way, though, I think that version 2 is a triumph. Without noticeably adding to the plug-in's complexity or slowing down the user, Oeksound have found numerous ways to make it more widely applicable, more controllable, and more appropriate to more sources.

The new default Soft mode is incredibly forgiving, and with many sources, you really don't need to do much beyond dropping Soothe 2 on a track and turning up the Depth control to suit. What's so uncanny about it, and so unusual, is its spooky gift for understanding what the human ear will find offensive, and its ability to make it sound as though these unwanted resonances were never there in the first place.

The more detailed configuration options, and many of the new features, really come into their own in more extreme cases. As an example, on one live tracking session I ended up with a guitar amp mic that had a lot of spill from the ride cymbal. By using a wide band-reject 'EQ' band in the mid-range, I could completely protect the core of the guitar sound, whilst 'boosting' above 5kHz or so. In this situation, Soothe wasn't just removing harshness: it very effectively turned down the cymbal spill in a way that I don't think any other plug-in could have achieved. At the other end of the spectrum, meanwhile, Soothe 2 isn't so much a 'de-harsher' as a woolliness removal tool, which can turn a flabby and inarticulate bass guitar into something much more nimble. From taming aggressive close-miked violin to de-clacking room mics, there are myriad other uses to which this unique processor can be put, and almost invariably, you'll get something useful from it after just a few mouse moves. An essential upgrade to an essential plug-in? You bet.