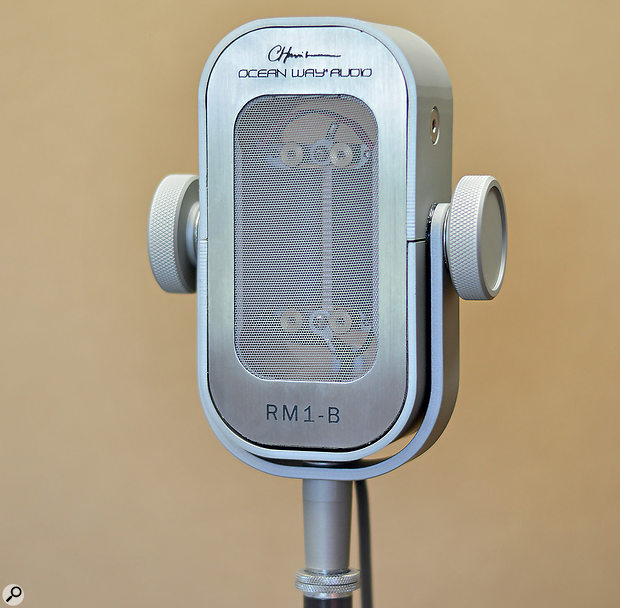 This stunning, hand–crafted ribbon mic is as much a work of art as it is a no‑compromise recording tool.

Once upon a time, the high end of the gear market was driven by recording studios and broadcasters. The market for premium recording equipment hasn't dried up, but it's changed, and is now driven as much by affluent and ambitious project-studio owners as by the Abbey Roads of this world. This change has led to the rise of 'boutique' manufacturing, and ultimately to products like the Ocean Way RM1‑B, which could fairly be described as luxury goods.

Brought to market by Allen Sides, owner of LA's celebrated Ocean Way Studios, the RM1‑B is an active ribbon microphone handmade in the USA on the principle of no expense spared. Its designer, Cliff Henricksen, has developed a distinctive new pole-piece geometry that "optimises magnetics and results in resonance-free acoustical performance". The RM1‑B is said to feature the most powerful magnetic field ever employed in a ribbon mic, and its active circuitry comprises a "super-audiophile first-stage preamp with all-discrete circuit". And it's not only the mic's sonic performance that has been implemented without compromise. Ocean Way are equally proud of its construction, which employs "nautical grade" elastic suspension elements, "archival stainless steel" cladding, laser-etched lettering and so on.

In short, this is not only a mic that's designed to sound as good as it possibly can. It's a mic that is intended to be a design statement and a desirable object in its own right.

The RM1‑B is supplied in a genuine, waterproof Pelican hard case. The mic itself arrives sandwiched between two shaped 'ribbon guards' that attach magnetically to the front and back to protect the ribbon from unwanted air movements. Removing these reveals the RM1‑B in its full majesty — and an impressive beast it is, too. Not only is it large, at six inches tall by three wide and two deep, but it's also seriously heavy, weighing in at about seven and a half pounds (3.4kg). Many of its construction elements are made out of very thick metal, giving it a visual aesthetic that's somewhere between esoteric hi-fi and military hardware. At its very centre, protected only by a thin mesh screen, is the two-inch-long ribbon itself, which is made of zigzag-corrugated pure aluminium, in the classic fashion.

The mic receives phantom power and outputs audio on a short captive cable with an XLR connector attached. I'm not a huge fan of captive cables in general, but this one is made to very high standards, and the neat strain-relief system at the entry point seems pretty much bulletproof. An elastic suspension is available as an option, but the review mic came with the default yoke mounting. This is as comprehensively over-engineered as the mic itself, with two huge knurled wheels that are easy to adjust and which hold the mic's considerable mass steady at any angle. On the review sample, though, the bottom corner of the mic slightly fouled the yoke if I tried to swing it out of the vertical position, undermining the otherwise consistent perception of flawless construction and build quality.

Among all the descriptions of optimised magnetics, super-audiophile preamps and archival steel on Ocean Way's website, actual audio specifications are a bit thin on the ground, and some are so vague as to be meaningless. For example, we're told that the mic's powerful magnetic field gives it "6dB more level", but no point of comparison is offered; and although a frequency response of 20Hz to 20kHz is claimed, no tolerances are mentioned, nor any chart supplied. The mic's active circuitry draws about 8mA from the phantom power source, and sensitivity is variously quoted as -36 or -38 dB (ref 1V/Pa), which equates to either 16 or 13 mV/Pa. Ocean Way say that this is "comparable to the quietest condenser mics", but since they don't offer any noise measurements, I'm not sure on what basis this comparison is drawn. I couldn't find any information about the output transformer, and in fact Ocean Way don't even state the mic's polar pattern — though this is, obviously, figure‑8, and symmetrical rather than offset as in some ribbon designs. (It would be hard to use two RM1‑Bs in a coincident array, though, partly because of their strong magnetic powers and partly because there'd be no way to position them with the ribbons less than five inches apart.)

The RM1‑B fully justifies its description as a 'hi-fi' mic, but offers more of a nod to the classic 'ribbon mic tone' that we associate with vintage RCA 44s and the like.

The review sample arrived just in time to do duty on a week-long album project. I kept it permanently in the live room, and it was soon earning at least a bit of its very considerable keep! Not once did I find myself thinking 'Uh-oh, wrong mic'. As good ribbon mics do, it made a splendid room mic. It put across tambourines and other bright jangly things with the naturalness that no capacitor mic ever seems to achieve. It was gorgeous on nylon-strung guitar, bringing out the perfect balance of weight, depth, note attack and body resonance. And it gave me the best shakey egg sound I've ever got. The economics of using a $3000 mic to record a percussion instrument costing less than a fiver might be doubtful, but until someone starts making boutique shakey eggs, why not?

I have no trouble believing that the RM1‑B is unusually quiet for a ribbon mic, nor that it really can capture sound at a meaningful level throughout the 20Hz to 20kHz range. Some ribbons substitute proximity effect and cheap transformer saturation for real low-end extension, and that definitely isn't the case here. Nor does it support the misconception that ribbon mics are instrinsically incapable of capturing high-frequency air and detail. Character-wise, it's a hint warmer and smoother than, say, the Rode NT-R or the Samar Audio models, which are perhaps best thought of as extremely good figure-8 mics that happen to use a ribbon transducer. The RM1‑B likewise fully justifies its description as a 'hi-fi' mic, but offers more of a nod to the classic 'ribbon mic tone' that we associate with vintage RCA 44s and the like.

The RM1‑B is, in other words, a very high-quality mic, and one that will find a use on almost every session in a typical studio. As to whether it's worth the asking price, a meal in a Michelin-starred restaurant will be expensive — but when you consider the cost of the ingredients and the skilled labour that has gone into its production, that price might well seem reasonable. Many studios won't be able to justify the cost premium involved in buying an RM1‑B rather than some other mic, but I don't think those who do will feel short-changed.

The RM1‑B is to sound recording what a Rolex watch is to telling the time!