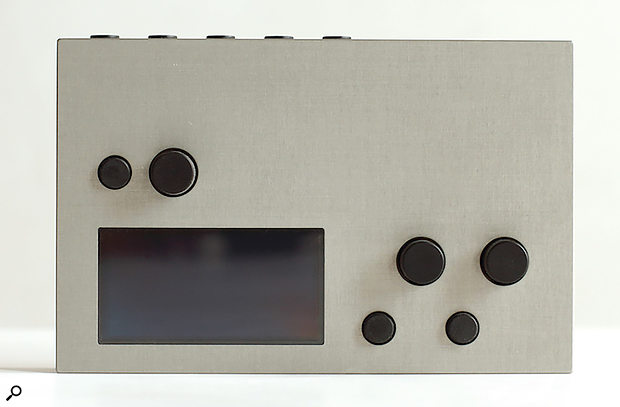 Monome's enigmatic Norns can be anything you want it to be — if you're prepared to put the work in...

The year 1967 saw the publication of a short science fiction story by Larry Niven entitled The Soft Weapon, which featured a small, mysterious, technologically advanced hand-held device capable of completely changing shape and function according to the position of a sliding control. The characters in the story attempt, with limited success, to determine what the various 'modes' of the weapon are and how they are activated and controlled.

The story came to mind whilst I was exploring Norns, a stand-alone synthesis, effects and control unit from Monome, the small New York-based company better known for their illuminated grid control surfaces. The Norns (I'll treat the word as a singular, although technically it is a plural) is a neatly finished metal box a little smaller than a paperback book, with some knobs, buttons and a small screen on top, and audio jacks and USB sockets on the back. There is no text or iconography anywhere on the unit — nothing is labelled — and it's not immediately clear what the box does, or how it does it. Unlike Niven's fictional weapon, the Norns is not dangerous (so long as you keep the headphone volume under control), but it is very much a 'soft' device: immediately reconfigurable into one of a potentially unlimited number of operational functions with the twist of a knob and the click of a button.

We'll look at the hardware and system shortly, but it's illuminating to trace some of the history behind the Norns. Following on from the early editions of their controllers (the push-button grids and later the rotary encoder-based arcs), Monome got into the Eurorack module business, shipping a variety of digital control and sequencing modules, many of which are capable of driving a Monome grid as a programming or performance interface. Since Monome as a company have always embraced open source as a philosophy, and released the software sources for all their products, it wasn't long before technically minded users were modifying, or even replacing, the firmware for these modules with enhancements and features of their own, and releasing these new varieties back into the community.

One of the modules to benefit from this communal development was the Teletype, a dynamic algorithmic triggering unit with a small text screen and a simple built-in scripting language. Plug in a QWERTY keyboard and you could program or improvise on your modular by entering lines of text, a process that would have seemed utterly ludicrous to any observer before the emergence of the whole live-coding and algorave performance scene.

So what of the Norns? It has a screen just like Teletype, some 'front panel' controls, can be connected to USB controllers, is networkable over Wi-Fi, runs synthesis and audio processing software, and is basically self-contained. (It even runs off a built-in rechargeable battery for true off-the-grid operation, if you'll pardon the pun.) Think of it as a music computer, with the versatility and flexibility which that implies, but without the distractions, interruptions and unreliability of a general-purpose multitasking laptop or desktop machine. The Norns is about options and possibilities, but also about creative focus; traditional computer systems tend not to do very well at the latter.

The Norns is very much a community-based product: prototype hardware was released to willing developers at an early stage, and the ongoing development of the platform is driven by community effort, in what might be viewed as a more formalised version of the process driving third-party modifications of the Eurorack devices. Its openness makes the Norns as much a development platform as a final product, and to get the most out of it you...