This is a reverb pedal which most definitely falls into the 'not as we know it' category — the Dark Star is really a tool for building reverb-based ambient textures to play over, or to use in composition. The pedal runs from a standard 9V PSU and its output level can be trimmed up or down using a pot inside the case. There are two footswitches, one for (true) bypass and the other for Hold. Hold freezes the reverb sound indefinitely until the switch is released. There's also an expression jack that allows an expression pedal to modulate either the Ctrl 1 or Reverb parameters, depending on how an internal switch is set. There are some parallels with the Electro-Harmonix Oceans 11 pedal, but to my ears the latter is a more refined and polite-sounding beast; polite is not what the Dark Star is about. 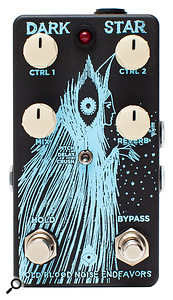 The key to the Dark Star's versatility is its three switchable modes, and that's where its Ctrl 1 and Ctrl 2 knobs come in to play — these do different things depending on the mode selected via the central three-way switch. mix and reverb (time) behave similarly in all modes, though be warned that turning reverb to maximum will create an infinite reverb.

The three modes are Pitch, Delay and Crush. Ctrl 1 and Ctrl 2 each control separate pitch shifters with a ±1 octave range in Pitch mode, in which the shifted sounds are then fed into the reverb engine. The dry sound is unaffected in all three modes. In Delay mode, these controls set delay time and feedback, and the delay comes pre-reverb. Mode three is Crush, which the manual describes as a bit-crusher. There seems to be no way to set the word length (or 'bit depth') — Ctrl 1 adjusts pitch and Ctrl 2 reduces the sampling rate — but the result is certainly a deliberately digital distortion of that ilk.

In operation, the switches introduce no noise and the controls work smoothly. The quality of pitch shifting may not be the best on the planet, but once fed through the reverb engine it's well up to the task of creating otherworldly sounds. Having two shifters means you can have both a shimmer effect and a low octave at the same time, and as the pitch shifting is continuously variable, you can set up detune effects or move the controls during performance/recording to create some very psychedelic and spacey effects.

Adding delay before the reverb just makes big even bigger, but the bit crusher is perhaps the most creative option as you can fine-tune the degree of harmonic nastiness to work with the reverb rather than fight against it. Even without invoking infinite reverb, you can set up decays that go on for many minutes. If you play in a surf band, this pedal is probably not going to appeal to you, but if you are into something more experimental, then it could very well float your boat — if only the producers of '50s sci-fi B‑movies had been able to buy this pedal!