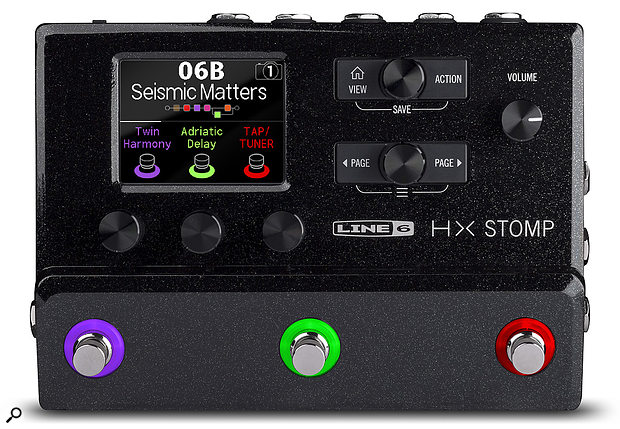 If Line 6's flagship Helix processor seems like overkill for your needs, then perhaps their more compact HX Stomp will appeal. Its robust metal construction and small footprint promise to make it an ideal all-rounder to add to a pedalboard or to your studio's amp-modelling and effects arsenal.

Essentially, the HX Stomp can be thought of as a half-power Helix — it runs the same algorithms and offers similar features, but it can run a maximum of six processing 'blocks' simultaneously. The four-cable mode allows selected effects to be deployed in an amplifier's effects send/return loop, and there's a TRS jack that allows two switches, two expression pedals or one of each to be added. The HX Stomp's stereo effects loop can also be configured as two mono effects loops, and you could even run a seven-cable rig with two amps! As with the Helix, the HX Stomp can also function as a USB recording interface; it appears as a class-compliant device in Mac OS and via ASIO drivers in Windows.

While blocks can again be arranged in various series or parallel configurations, the display is rather smaller than the one on the Helix, but the bold colour graphics and the use of different colours for different effect types mean it is still very easy to navigate. If you're unfamiliar with the Helix range of amp and effects models, I'd suggest reading Bob Thomas's detailed review of the Helix Rack in SOS June 2016. In total there are more than 300 amps, cabs and effects, including a looper, plus the ability to import your own loudspeaker impulse responses. Some new effects models have been added since the Helix review too, including some 'special' reverbs.

Note that although a 3A PSU is included, the pedal draws only 1.5A of current, and Line 6 list various compatible pedalboard PSUs on their website. If your existing pedalboard power supply isn't up to the job, you'll need to find a way to mount the included PSU.

The control panel is very streamlined, with just three footswitches (still with those lovely colour-changing LED rings), six knobs and four buttons. The two encoder knobs flanked by buttons also include push switches. All the main connections are on the rear panel: a socket for the included PSU, stereo ins and outs on jacks (which can be used in any mono/stereo combination) and a TRS expression jack socket. A well thought-out learn mode makes it easy to assign functions to your external pedals or switches, which connect via any TRS-to-dual-mono jack Y-lead. There's also a USB port for running the free HX Edit software, handling firmware updates, or to use the HX Stomp as a recording interface. There's a choice of a hard relay-switched bypass, or a buffered one that allows effect tails to continue playing.

The I/O options cater for most destinations (eg. PA, amp, computer, mixer or headphones), as well as footswitches, an expression pedal or MIDI controller.

On the left of the case you'll find a quarter-inch TRS headphone jack and a pair of MIDI sockets for in and out/thru. The most basic use of MIDI is for patch recall, but selected parameter control is also available. On the right there's a TRS stereo send jack and a pair of return jacks that can also be used in mono. These connections allow for inserting an external hardware pedal between two blocks in the HX Stomp signal chain, or for configuring the multi-cable mode.

It's now commonplace for this type of device to offer more than one footswitch mode, and in this case there are four: Stomp (two or three assignable stomp switches for turning on/off individual effects blocks), Scroll (Preset or Snapshot up/down plus an assignable stomp switch, which is tap/tuner by default), Preset (three presets plus bank up/down), and Snapshot. Snapshot mode allows you to set up instant changes between variations of the same preset — turning blocks on or off and/or applying parameter changes. Presets are arranged in banks of three.

As a general rule, the upper controls address what's seen at the top of the screen and the lower controls what's at the bottom. The three knobs below the screen relate to the parameters shown above them when in Edit mode, and in Play mode the display shows you what the footswitches do. As with the Helix, the footswitches have capacitive touch sensors, which is really helpful for desktop editing. Other than for global settings, most of the time you'll be in Play or Edit mode, but if you do get lost the Home command will get you back to Kansas!

Play is used for live performance. The upper knob scrolls through the 126 on-board preset locations, the first 100 of which are filled with factory patches — which can be overwritten with your own. Up to six blocks can be combined within a preset. The factory presets are arranged as effects only, amp-modelling with effects (DIR), and four-cable patches for use with an amp's effects loop. Stereo effects loops can also be accommodated. Other presets are designed specifically for bass, acoustic guitar and keyboards.

In Edit mode, the touch switches become active, allowing you to navigate to assigned blocks — block parameters appear at the bottom of the screen above their respective knobs. A Page button accesses additional parameters. The upper knob allows you to move through all the blocks, and you press the switch to turn blocks on or off. Using the Action button in combination with the upper knob allows blocks be reordered or moved to a parallel path. 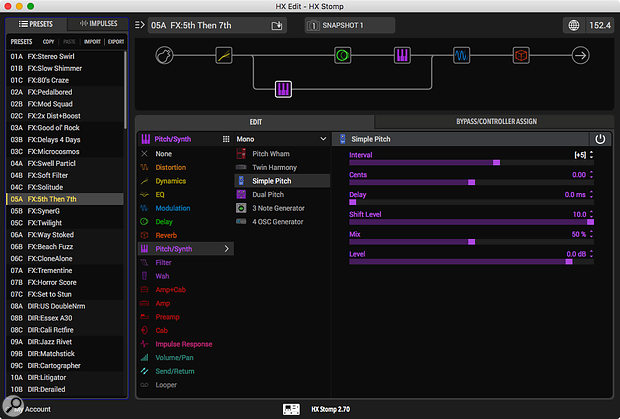 The HX Edit software makes setting up amp and effects chains easier and is free to download.

While the operating system is well thought out and easy enough to navigate, you really do need at the very least to read the quick‑start manual or watch the online tutorials, as some functions require you to press two things at once. The HX Edit software has a clear advantage over front-panel editing, the screen real-estate making it very easy to either copy and modify the factory presets or build your own from scratch. The software is so intuitive that instructions are virtually unnecessary.

Sonically, the HX Stomp is up there with the best of the current crop of amp and effects emulations, and the ability to import your own IRs is a great bonus — especially as you can now buy classic cabinet IRs from the likes of Celestion. You can choose from two settings that use either the first 1024 or 2048 samples of an IR. Having said how good the effects sound, though, I should mention that the pitch-shifting doesn't work particularly well for chords (it sounds smooth for single melody lines).

If you're already sold on amp modelling, then all you'll need is a feed to the PA or a flat-response powered speaker (two for stereo, obviously!) and you could have your live rig sorted. The majority of the effects and amp models are excellent, but even if you've not yet been won over by amp modelling, the HX Stomp could still potentially replace your entire effects pedalboard and feed your usual amp — or, alternatively, it could take on the role of supplying delay-based, modulation and dynamics effects while your favourite analogue pedals handle overdrive duties.

Given the quality and quantity of what's on offer here, the asking price is very modest, and the HX Stomp should hold a lot appeal both for those who fully embrace digital amp modelling and those who prefer to use a conventional amp with a pedalboard. It also makes for a great ally in the studio, as it can turn its hand equally well to anything from ambient washes to full-on rock. I'm finding it genuinely difficult to imagine many effects situations the HX Stomp couldn't cope with — but if you really do need to run more than six effects blocks without the amp modelling, Line 6 have another device, the HX Effects, that will do the job at the expense of a larger footprint (not to mention the Helix itself). In summary, then, given the price, the Helix-like capabilities, and stompbox convenience, there really is a lot to like in the HX Stomp.

Alternatives to Helix‑quality effects include those in the Fractal Axe FX range, the new Boss GT-1000, the HeadRush Gigboard, the Atomic Amplifire and Positive Grid's BIAS range of modelling amps. Though Kemper's profiling amp isn't quite the same thing it could also be well worth a look.

Boasting Helix-quality processing but at a lower price and in a more compact form, you can't combine as many blocks, but there's still more than enough capability for any normal application.