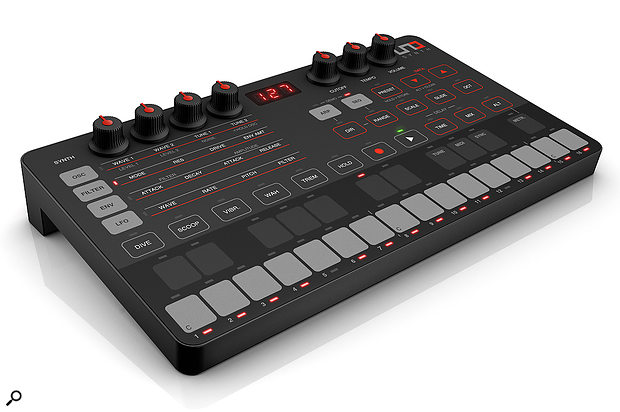 The UNO is the first hardware synth from IK Multimedia, best known for their iOS friendly controllers, interfaces and plug-ins. It's a super-portable analogue monosynth with patch memory, app control and a tempting price tag.

I was immediately intrigued by the UNO: small, self-contained synthy things with batteries are a personal weakness. But I had the same initial scepticism I had with the Pioneer/DSI Toraiz AS-1, with which the UNO has quite a lot in common. Can people warm to an analogue synth with a limited set of panel controls and a touch keyboard? And IK Multimedia can't boast the synth track record of Dave Smith. On this count, IK were not starting from scratch: for the UNO they employed the talents of synth designer Erik Norlander, and worked with fellow Italians Soundmachines on the hardware engineering. Among other things Soundmachines make the Modulör114, a self-contained Eurorack workstation with USB that's been high on my gearlust list for the last year.

The UNO is certainly one of the most backpackable synths I've encountered. It's small and light, and apart from seven knobs, there's little in the way of parts you could break. Besides the knobs, all user controls are flat zones on the surface. While this is reminiscent of the membrane-covered buttons found on the Moog Source or Yamaha DX7, these are not buttons at all. The panel is a flat piece of matte Lexan-type material, and the 'buttons' are touch-sensitive zones that respond to a light touch or tap.

The panel has a nicely raked angle thanks to the riser block at the back, which houses the mercifully accessible battery compartment (you'll be swapping out your rechargeables every two to three hours). The stepped design is also handy for hooking the unit onto other surfaces, such as the blank space on a controller keyboard. The plastic chassis and knobs have the feel of a budget MIDI controller, but the UNO seems tough enough and the touch UI should make it unusually resistant to dirt and liquid.

One thing I've criticised in past IK hardware is the use of proprietary adaptor cables, in particular the mini-DIN port they've used instead of USB. Happily, the UNO uses a standard micro-USB port for connection to a computer, iPad or iPhone, and which can also power the unit. Less straightforward are the 2.5mm jack ports for the direct MIDI In and Outs, the same as those found on the iRig Pro interface. I can’t knock IK, as they’ve used the MIDI Manufacturers Association recommended size and pin-out for small format MIDI. Unfortunately I’ve got two other devices that use 3.5mm ports, and they don’t even agree on the wiring! Rather than jack to regular female MIDI adaptors, there are two jack to full-sized DIN cables in the box. This saves the need to add MIDI cables of your own, but does limit you to the length provided.

Around the back of the UNO we find connections for USB, MIDI and audio I/O.

The UNO has 100 memory slots, each of which stores a complete synth patch, plus a 16-step sequence, and up to 20(!) lanes of parameter automation. During playback, patch changes are queued until the end of the bar, and tempo is set globally from a dedicated knob. This means you can perform manual arrangements using multiple patches, or sit back and audition patches. All the slots come with factory sounds and sequences, of which 80 can be overwritten with your own creations.

Playing through the presets reveals a surprising sonic versatility, with genuine analogue warmth, depth and grit. A dedicated filter cutoff knob is asking to be tweaked. This is grouped with the other fixed controls, tempo and volume, which makes sense although I did regularly adjust the tempo out of the habitual assumption that resonance would be right next to cutoff. The other four knobs are assigned to four pages via touch buttons: Osc, Filter, Env and LFO. Control assignments are all shown in a printed table on the surface so there's no guesswork. It's a simple and effective way to access 16 key parameters with the controls at hand. There are in fact some secondary assignments (mixer levels and full ADSR envelope controls) available by long‑pressing the mode buttons. All other more tweaky synth engine controls must be accessed via the control plug-in or app.

Below the control matrix are trigger buttons for five momentary performance effects: Dive, Scoop, Vibrato, Wah and Trem. These temporarily patch and boost modulation to various parameters. Dive and Scoop create a pitch sweep (down or up respectively) based on the current filter envelope. Vibrato, Wah and Trem modulate pitch, filter and amplitude with the LFO. All very useful for adding interest and life to the sound without external controls.

Various other controls and settings are accessed by selecting modes and using two touch buttons to increment and decrement values. This is fine for setting sequencer modes and keyboard octaves, and OK for patch selection (if you don't have far to go), but feels awkward as the method for setting the time and mix of the delay effect. I'd have liked one of the knobs to work as a data‑entry control (perhaps combined with the Alt button).

UNO has a fairly conventional monosynth architecture, but one that's surprisingly well spec'ed given the budget. A prime example is that the twin oscillators offer smooth waveshape morphing from triangle to saw to square to pulse. The shapes can be independently modulated by the LFO and Filter Envelope, or you can modulate pulse width instead. The oscillators have a two-octave base tuning range, each set using a single knob. Turning the Tune knob in either direction away from the 12 o'clock position detunes from the middle octave up to ±1 semitone. When you get to about 8 o'clock or 4 o'clock the tuning jumps to whole semitones. This is a clever way of simplifying the controls, although it does mean that you can only detune an oscillator that's set to the central note; all other values are hard quantised.

The VCOs and a simple noise source are mixed into a filter with low-, high- and band-pass modes. This is musical and squelchy, with no bass scoop when you crank the resonance. It can key track and has a Drive section that gives some subtle grunge and punch. The next boon to sound design is the provision of two separate envelopes. One is dedicated to amplitude. The Filter Envelope does what is says on the tin, but as we've already seen it can also be patched to a number of other destinations.

Two envelopes and morphing VCOs are significant pluses compared to some similarly priced synths. On the flip side, the most notable absence is any interaction between the oscillators. There's no sync or intermodulation available. Nor is it possible to modulate the pitch from an envelope. The LFO can modulate pitch, but always both VCOs at the same time and not up to audio rates. With the various mod destinations and the momentary effects, the LFO plays a significant role in each patch. Thankfully, then, it can be sync'ed, and has numerous shape possibilities including Sample & Hold and pseudo envelope ramps.

While the UNO looks like a sound module (and performs well as one), it has a number of features that make it playable as a stand-alone instrument. The two‑octave touch keyboard is more usable than you might imagine, and allows for swipes across notes. However the arp, Scales mode and sequencer make the difference.

Sequences can be created in two ways. Real-time recording is the quickest method, both for capturing notes and automation. Alternatively, in Step Record mode you can select one step at a time (with playback stopped) and assign notes and parameter values. An excellent bonus feature is Step Edit, accessed by pressing Alt+Record during playback. This arms per-step automation writing (or 'parameter locking' if you prefer), where you can hold a step and adjust values for just that step.

Sequence playback is of course sync'ed to internal tempo or incoming MIDI Clock, but unfortunately you can't apply any real-time transposition from the keyboard. Any notes you play manually will simply interrupt the sequence while playing.

The arp has all the usual modes and, like the sequencer, you can adjust the speed from a quarter to double time if sync'ed to external clock. There are double-note modes that I particularly liked. More musical assistance is provided by Scales mode. Here you can set a root note and scale, and it will be presented on the UNO's white notes. External MIDI inputs are not affected. 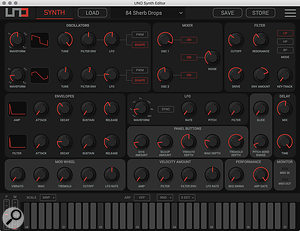 The UNO Synth Editor provides complete control of all synth parameters and runs stand‑alone or as a plug-in in your DAW.One area where IK Multimedia have pulled out all the stops is control software and MIDI integration. The UNO Synth Editor is available as a stand-alone app for Mac, Windows, iPad and iPhone, and as a plug-in in all formats (VST, AU, AAX). The app presents an editing panel with greatly expanded synth control compared to the hardware itself. You also get access to all the settings, and can manage the preset memory.

I was particularly impressed to see a plug-in version of the editor. This is essentially the same as the stand-alone app, but with the added benefit of automatic patch recall when you open your project. Because the hardware sends as well as receives MIDI CC data for all parameters, you can also control the plug-in from the synth, and therefore can capture performance information as either MIDI or DAW host automation. You can also record Program Changes.

I spent quite a bit of my time with the UNO using battery power and headphones, and found that it can be quite noisy at times. There's a low-level interference that fluctuates depending on the position of the pots. It's mainly a problem at headphone levels and disappears at full volume when you're plugged into a mixer or interface. You can also hear the synth generate faint self-calibration tones when it's not doing anything else.

More problematic is that there is noticeable interference if your UNO and audio interface are both connected to a computer via USB. This is an issue I've found with a number of USB devices over the years. It is particularly noticeable on the UNO so in this configuration you'd really need to use a USB isolator, or use a balanced cable with the ground disconnected at the input side.

The UNO is an enigmatic little beast. It feels like a modern lightweight MIDI controller but then lets rip with this traditional analogue sound. Its portability, patch memory and the cute momentary performance effects make it a good travelling companion. The full MIDI spec and control plug-in, and size again, also make it a nice little studio sound module. It might not offer the traditional hands-on experience or sonic extremes of the Monologue or Microbrute, but it has a classic analogue sound of its own and outguns both in terms of motion sequencing and software control. It's fun, simple to use and will likely become a whole lot of people's first real synth.

Hovering around the UNO's price point you'll also find the Arturia Microbute and Korg Monologue. The Microbrute will give you a real analogue experience, with lots of controls and even patch points. The Korg has patch memory, a wave shaper and a transposable sequencer, but a comparatively limited envelope spec. Similar to UNO with regards to form factor and app control is the new Skulpt synth from Modal. This offers more versatility but isn't analogue.

An affordable, portable and surprisingly capable analogue synth with lots of mod cons.