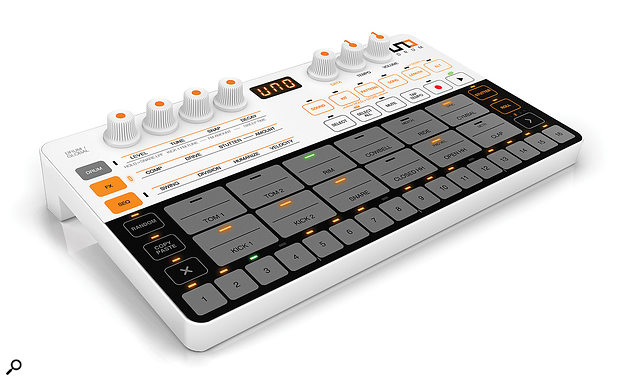 IK follow up their popular UNO Synth with a drum machine cast from the same mould...

IK Multimedia's follow-up to the UNO Synth is, sensibly enough, the UNO Drum: a hybrid analogue and sample-based drum machine. It shares the UNO Synth's portable form factor, with a touch-based control panel and a row of knobs on a small, lightweight wedge. It is defiantly old school in sonic character, but has mod cons like patch memory, USB and plug-in control.

Taking the UNO Drum out of its box I was struck by how light and compact it is. I said the UNO Synth was the most backpackable of synths; well you'd barely notice if you stuck one of these in with it. The box also has MIDI jack to DIN adaptors, a micro-USB cable for power and connectivity, and, rather generously, a four-pack of AAs if you want to go cable-free.

A single mini-jack output carries the mono mix, and there's an input for merging another device like, say, an UNO Synth. Plugging in my headphones I was met with a steady hiss that seems to be an UNO family trait. This doesn't track the volume setting, so the noise floor is lower if you can drive the outputs hard into a mixer, but it's pronounced and distracting even at fairly loud headphone levels. The USB interference that plagued the UNO Synth didn't seem to be as bad here.

The UNO Drum has 12 drum channels, split across two rows of six touch pads. Each of the first (bottom) six channels can be switched between a fully analogue drum synth voice and PCM sample playback. The remaining six always play samples. The channels are named and dedicated to specific drum types, and have appropriate synth types and samples. There are five sound presets per channel, with slot 1 being the analogue voice on the hybrid tracks.

Most sounds have just three controls (level, tune and decay), but the analogue kicks and snares have some extra editable parameters. There are two Kick models. One is in the classic analogue 808 mould, the other has FM with variable tuning and sweep which can emulate 909-type sounds or go into more interesting territory. The Snare is pretty much classic analogue fare again, with noise and body components shaped by a Snap control and a low-pass filter.

The Hats are pleasing enough fizzy dings. Other than the decay you can choose between four tunings. This seems to change the relationship between two sources, and the phase shift between them changes the tone noticeably from one setting to the next. The hats are independent voices, and there doesn't seem to be any provision for channel choking on the unit. Finally the analogue Clap has only a Decay setting.

All other sounds are pre-baked samples: there's no way to load your own. There's a consistent character to the sound selection: old school, lo-fi and crunchy. The 1 and 2 slots are populated with 808 and 909 sets, although sounding as though they've been sampled into an EMU SP1200. All the other samples have an early '80s 12-bit (at most) vibe as well: think Drumulator, Oberheim DX, Yamaha RX5 maybe, complete with authentic quantisation noise and alias tones.

A snapshot of the 12 channels can be saved as a Kit into one of 100 slots. This stores each channel's sound type and parameter values.

The idea of an affordable hybrid analogue and PCM beatbox with both kit and pattern memory is really good.

The UNO Drum has two master effects: Comp and Drive, both of which serve to hot up the sound and add impact. When cranked up the Drive rewards you with some nice warm and fuzzy saturation, especially on the kicks.

This does tend to push the noise floor up a storey or two, and exacerbate some sonic oddities that I'd already noticed. Parts of sounds tend to overstay their welcome. Kick 1's FM operator and the analogue snare's body component both leave their VCAs open for a set time, regardless of the Decay. This results in a stray tone from the former and a hummy noise from the latter.

Then there's something going on with the analogue hats. After either is triggered all other sounds seem to open up the VCA for some part of the hat tone, and it provides a very noticeable and unwanted accompaniment.

The UNO Drum can be played live via the touch pads, each of which is split into two zones for two different velocities (though this can be disabled). Generally I moan about lack of velocity-sensitive inputs, but two levels is consistent with classic drum machines. What's harder to swallow is that the pads occasionally fail to respond, especially when playing multiple fast triggers. Trying to play 16ths or rolls with alternate fingers always results in many missed triggers.

Patterns can be recorded in real time (but are always quantised), or entered as steps using the 16 pads along the bottom. Patterns can be up to 64 steps long, and there's a page button for banking bar by bar. All tracks in a Pattern have the same length. Any of the channel sound parameters can be automated in real time, or you can print per-step ('parameter-lock') settings by holding a step and adjusting a value. The automation doesn't support sound mode changes.

There are 100 slots for storing Patterns, and these are saved independently of Kits (again, like an old-school drum machine). Only the Swing amount is saved with a Pattern, so there's no way to save a complete 'session' and recall a Pattern, Kit and effects settings. Likewise, Tempo and the Humanize feature are global settings that will be inherited by any Pattern you load. Often it's useful to be able to juggle patterns without losing your current sound set and vice-versa to try out different kits with a pattern. A link option would be nice, though.

Song mode gives you a handy way to play a sequence of patterns. With Song mode active, the step buttons represent steps in the pattern chain, and you can simply hold a step and dial up a pattern.

OK, time for some positivity. Where the UNO Drum is successful is performing, jamming and improvising. This is aided by a few features, not least of which are the Stutter and Roll effects. Stutter temporarily messes with your pattern to create various loops, fills and pitching effects. There are 10 different styles to choose from with an Amount factor that adjusts how many drum channels are included. It's fun and effective and way faster that manually programming variations, fills and builds.

Roll is a more traditional note repeat feature. It affects whichever channel is selected. While held you can adjust the repeat rate from eighths to 32nds, including triplet rolls. As well as these regular rolls, there are four 'fill' repeats that produce more irregular patterns and include some pitch modulation.

Complementing the simple Swing option is Humanize. This adds random variance to timing and velocity in a non-repeating pattern.

Beyond these special features, other aspects of the design help with live tweaking and experimentation. For a start, the whole panel stays active during Song mode playback, letting you mess with sound parameters, change kits and trigger Stutter and Roll while a large arrangement plays back.

It's also easy to revert to the saved version of a kit or pattern, so you can go crazy then restore normality. This is great when coupled with the Elektron speciality: a Select All button. This applies all changes you make to all 12 sounds, again great for making a dramatic change during a breakdown before a drop. 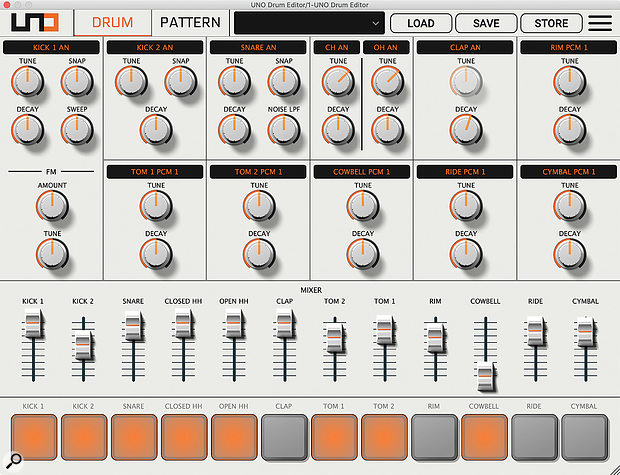 The UNO editor gives you remote control of UNO Drum from a plug-in, as well as back-up and pattern editing.

This is a tricky one. The UNO Drum does have some compelling features, particularly its portability and how easily it can help you generate interesting drum tracks. The idea of an affordable hybrid analogue and PCM beatbox with both kit and pattern memory is really good.

IK Multimedia describe the UNO Drum as "the ultimate beat creation station for anyone and everyone to create warm, punchy, high-quality and inspiring grooves", letting you perform "using the widest sonic palette". This is a bit of a stretch and seems to be missing the real character of the UNO Drum. In fact, sonically it is an instrument with quite a focused style and palette: mashing a little bit of Roland X0X with a large portion of low bit-rate Emu. Which is fine, although some of the noise and weird artifacts seem more like bugs than features.

It is what it is. If you fancy a taste of some classic drum machines in a handy modern package which, alongside the UNO Synth, can easily knock out gritty hip-hop or synthwave, then it could be just the thing.

Arturia's DrumBrute Impact is almost as portable and certainly as playable as the UNO. It has more sophisticated analogue synthesis and sequencing, but doesn't have PCM sounds or kit saving. Staying in this price range you could also get a pair of Volcas, say, the Beats and Sample. If analogue is less of a key requirement compared to overall power, consider stretching an extra £100$100 for the Elektron Model Samples.

UNO Drum allies some of the analogue and digital character of early '80s drum machines with modern sequencing and effects in a very portable format.