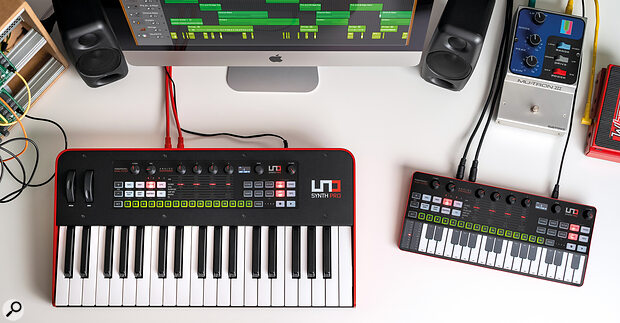 IK go pro with desktop and keyboard versions of their expanded UNO Synth.

IK Multimedia have certainly set themselves a task with the UNO Synth series. They don’t have a generations‑old name in the hardware synth world to precede it, à la Sequential or Korg, instead being more known for software and interfacing products like their ubiquitous iRig range. IK’s microphones and interfaces, it’s fair to say, tend to be geared toward the podcaster or bedroom producer, either on a budget or on a trip. In some respects, therefore, their line of hardware synth products — the UNO Synth, UNO Drum and now the UNO Synth Pro — fits right in, while in others it’s a foray into brand‑new territory.

With the UNO Synth Pro IK have doubled down on their analogue ambitions, this time breaking the design out into two separate versions: a desktop version similar to its predecessor and a larger version offering a full‑size 37‑key keyboard housed in a robust metal chassis. You might say that this is the moment for IK Multimedia to show whether or not they are serious about synthesis, and the answer is that they very much are. For one thing, the price has more or less doubled since the original UNO — and then some if you go for the full‑size version, which retails at over three times the price of the original.

Like the original UNO, the architecture of the Pro series was developed with another Italian company, analogue specialists Sound Machines. It’s nice to see that with a new iteration in the series, IK have not just had a redesign or tweaked things under the hood but actually expanded on the original design. There’s another oscillator, another filter and another LFO to play with, there’s CV and gate compatibility, and the capacity for three‑voice paraphony as well as unison. The buttons have been rubberised, which will come as a relief to any ham‑fisted users like me who struggle with the much less tactile ‘touch‑zone’ buttons included on the original UNO.

From the first power‑up, it’s clear that esotericism is off the agenda. It shouldn’t come as a surprise that accessibility is the name of the game with IK, who have made every effort to engineer a synth that offers easy navigation and quick results for users of all abilities. This they have very much achieved: straight out of the box I was creating presets, dialling in effects and adjusting modulation routing without so much as glancing at the quick‑start guide.

The core interface revolves around four assignable knobs and a grid of selectable parameters. Select your circuit with the buttons on the left, and four corresponding parameters below their respective knobs light up in red. Easy peasy. Some aspects of this take a little bit of getting used to, for example the Oscillator button will toggle between the tuning and waveform sections but not the oscillator mix — which has its own separate button — and the filter and LFO buttons both double up as selectors for which filter or LFO you want to edit, meaning I occasionally found myself editing the wrong one.

It shouldn’t come as a surprise that accessibility is the name of the game with IK, who have made every effort to engineer a synth that offers easy navigation and quick results for users of all abilities.

One disadvantage of the assignable knobs is not knowing what values the parameters are at before you move them; it’s always mystified me why developers so often choose potentiometers over encoders for this purpose. A simple four‑number read‑out on the screen would have sufficed (which it’s presumably more than capable of), but at least the UNO gives the option to edit its knob behaviour relative to an existing parameter value.

The Pro’s OLED screen is a welcome upgrade from the original UNO’s triple seven‑segment display, and its menus do allow intuitive and quick control over parameters, the preset bank and global settings. It’s not immediately clear which parameters are accessible on the main interface and which are only accessible through the UNO Synth Pro’s screen menus, but once you’re familiar with it it’s generally a very easy panel to navigate.

When it comes to the core engine of the UNO Synth Pro, I’m happy to say that its three oscillators sound good. Really good. They’re very clean, occasionally too clean for my preference, but there’s a noise generator to help add some bite to your voices. My general metric for the quality of an oscillator is the sound of its triangle wave by itself, and the UNO Synth Pro stood this test. Movement through each oscillator’s variable waveforms is represented by a handy little wave display on the screen, and there’s a ring modulator as well as the option to hard sync the oscillators a variety of ways.

The twin filters offer a variety of modes, but the choices offered by each are not the same. This is because the two filters are different: one is an OTA‑based (operational transconductance amplifier) switchable high‑ or low‑pass two‑pole filter, while the other offers two or four‑pole modes and is based on Sound Semiconductor’s SSI2164 VCA. This much choice naturally involves a trade‑off with the quality of any individual setting, and while the UNO Synth Pro’s filters are no exception to this rule they get the job done.

The on‑board sequencer is generally intuitive and flexible in its functionality, as is the arpeggiator. Steps in a sequence are easy to record and easy edit on the fly, and it even has the option to play a metronome when recording in real time — either a useful or infuriating function, depending on your preference. Luckily here there’s room for both.

To Key Or Not To Key?

Both versions of the Pro are identical but for their keyboards. The full‑size Synth Pro offers a 37‑key semi‑weighted keybed by Fatar (another Italian company, responsible for the lovely feel in all sorts of keyboards, from Nord to Korg), while the Desktop features a capacitive keyboard more akin to that of the original. Despite a big difference between the two synths’ overall size and portability, the interface panels are exactly the same size and scale. This is impressive considering how the panel feels at home on the Desktop but in no way cramped on the full‑size UNO Synth Pro. Personally, I could take or leave the Desktop’s keyboard. While it seems suited to testing voices or playing very simple melodies, its application more or less stops there. That said, much of IK’s MO concerns portable playability, so it’s understandable that the keyboard has remained.

Both desktop and keyboard versions of the UNO Synth Pro share the same back‑panel audio connections, and both designs offer CV/Gate I/O and full‑size MIDI ports.

The Desktop version, sitting comfortably beside my main keyboard workstation, feels more like a VST in outboard form than a playable hardware synth, with the enormous advantage of having an analogue heart. It syncs effortlessly with a DAW (as one would expect from IK) and beyond a conventional instrument could be used for all sorts of things, from sequencing other instruments to serving as a simple outboard effects unit with its ability to process external audio. In fact, the UNO Synth Pro syncs so well with a DAW that soon it will literally take the form of a VST, in the form of the UNO Synth Pro Editor companion software (at the time of writing due to be released soon). This will come as a standalone application or as a DAW‑compatible VST, and the combination of the Synth Pro hardware with all the preset storage and easy parameter access one could hope for from a dedicated VST promises to be a very useful combination.

The effects on the UNO Synth Pro are, for the most part, laudable. Based on prior experience of onboard synth effects I didn’t have high hopes, but I have to say I am very impressed. The reverb has selectable algorithms and adjustable pre‑delay, time, size and — remarkably — filtering, and can achieve anything from quick, small‑room reflections to vast cathedral‑style resonances that change the character of a patch beyond recognition. The digital delay is also highly editable and sounds good, particularly when used in conjunction with the arpeggiator, where it can achieve lush psychedelic soundscapes in an instant.

The ‘modulation’ section of the effects matrix offers chorus, phaser or flanger. While the chorus is capable of some pleasant Juno‑style texture, the phaser and flanger leave a little to be desired and overall don’t add much value to the equation. The FX matrix in the central panel allows each effect to be dialled in to taste; it’s unfortunately not possible to custom‑chain effects, which would have opened up a lot of sonic possibility for this synth, but the FX section of the UNO Synth Pro is worth having for the quality of the reverb alone.

The UNO Synth Pro nicely demonstrates many of the benefits of a digital‑analogue hybrid, further widening its appeal to those who might not feel confident diving into the purist world of analogue to have their synth needs met. IK have had to choose their battles in this respect, and this they have generally done well. Sure, the pitch wheel has audible frequency increments, but it’s easy to make tweaks here and there to things like the envelope trigger (there’s a ‘mono’ option for retriggering the attack with every new note or a ‘legato’ option for holding the envelope open until all notes are released) or the oscillator glide (consistent time or consistent speed). There is a rather lengthy self‑calibration procedure upon every power up, lengthy enough that I originally thought it was just for the initial power up, but it’s a small price to pay for a very stable and highly usable synth.

Considering its almost wildcard status, the UNO Synth Pro is surprisingly powerful. The on‑board effects are surprisingly good. The full‑size keyboard felt surprisingly nice. If there’s one takeaway from all this, it’s that maybe we shouldn’t be surprised anymore. IK have proven themselves in the analogue synth arena with an instrument that will not only meet the needs of those looking for something affordable, accessible, reliable and playable, but which will hold its own in any studio or live setting. 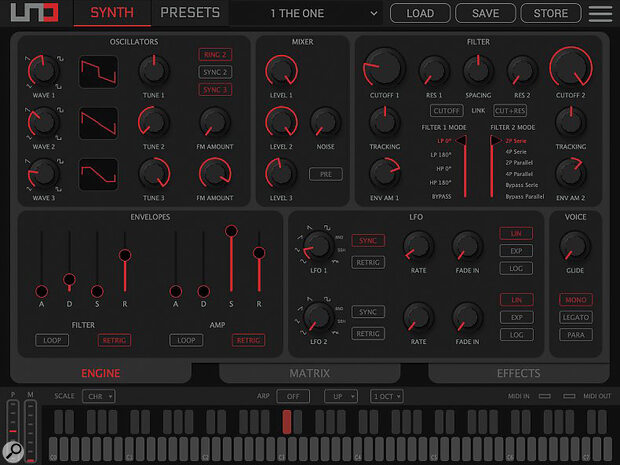 The UNO Synth Pro Editor allows seamless and detailed integration with a Mac or PC. Available as a standalone application or as a plug‑in, it gives quick access to all the Synth Pro’s parameters, including those only available via alternative shortcuts or menu‑diving on the hardware control panel. It also provides users with a detailed read‑out of all parameter settings in a way that the multifunction controls of the hardware synth do not, meaning that settings can be fine‑tuned in the context of an in‑depth overview of your voice. The envelopes, for example, sit alongside their respective loop and retrigger buttons, and the oscillator settings are displayed side by side with their relative waveforms and FM settings.

Usefully, the editor also allows easy organisation of a potentially massive library of presets — by genre, style, date created or setlist — as well as bulk‑transferring and re‑ordering of the presets on the Synth Pro itself, expanding its storage capabilities enormously. Editing is of course in real time, presenting all the benefits of both a soft and hardware synthesizer in one classy package.

The UNO Synth Pro is not just ideal for budding synthesists; with quality at its core it will stand up in any synth array.