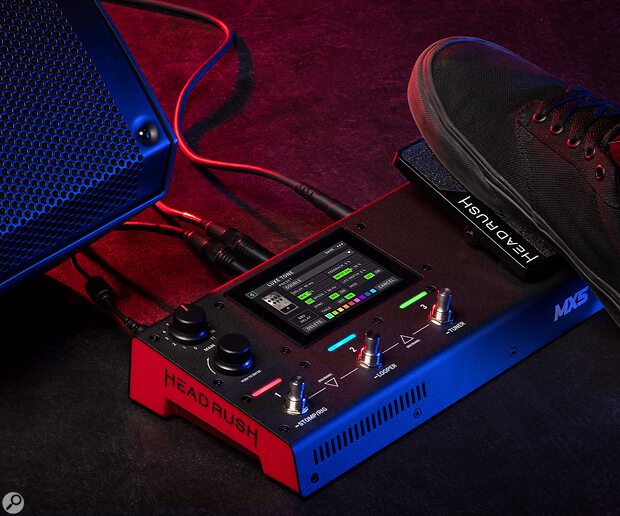 It may be super-compact, but the MX5 punches well above its price tag. What’s not to like?

In the four years since I reviewed the HeadRush Pedalboard (SOS September 2017: https://sosm.ag/headrush-pedalboard), the brand’s first guitar amplifier and effects modelling processor, the HeadRush range expanded to include the more compact Gigboard and the highly specialised Looperboard, which is dedicated entirely to the art of looping. Now, in keeping with the current trend of squeezing quarts of software into pint‑sized housings, we also have the HeadRush MX5, a super‑compact amp and effects modeller that contains all the software power (if not all of the facilities) of its larger modelling stablemates.

With a footprint about half the size of an A4 page, the MX5 is one of the smaller modelling floorboards around. Its black, all‑steel wrap‑over top panel carries the MX5’s rotary controls, four‑inch colour touchscreen, footswitches and expression pedal, with all input and output connectors mounted at the rear. By way of contrast, its bottom and sides are moulded in bright red, impact resistant ABS. The touchscreen dominates the front panel and, while obviously smaller than the seven‑inch screens of its stable mates, its legibility does not seem significantly compromised. In keeping with its reduction in size, the MX5 has been given only three footswitches, each with its own individual RGB LED, the colour of which echoes that of its assigned on‑screen function. 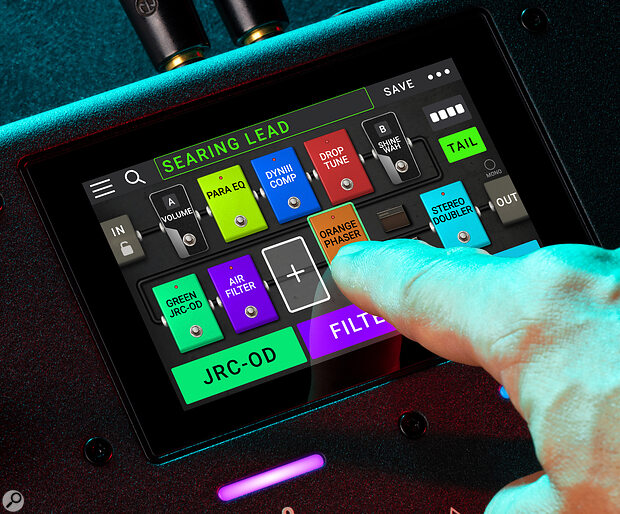 The touchscreen may be smaller than those of the larger Headrush devices but it remains easy to read and use.

The MX5’s only rotary controls are the Main output volume and a push‑to‑enter encoder. The latter can be used to navigate around the touchscreen, to select functions and to alter parameters. The final front‑panel feature is a wonderfully petite expression pedal that features both adjustable tension and a toe switch, with a positive mechanical action. A second, external expression pedal can also be connected, courtesy of a rear‑panel quarter‑inch TRS jack socket. Other quarter‑inch TRS jack sockets carry the MX5’s stereo effects loop and balanced main stereo outputs, with TRS minijacks being provided for headphones, auxiliary audio input and MIDI I/O. A USB connector facilitates connection to a Windows or Mac computer.

Curiously, the description of the DSP has changed: the “Powered by Eleven HD Expanded” and “Powered by Multicore System” logos, which adorned its older stablemates, have been replaced by the simple statement that the MX5 features “custom‑designed DSP system and powerful multicore processing”. No matter the change in description, the review MX5 runs HeadRush 2.3 software, just as its Pedalboard and Gigboard siblings do. Booting up takes 15 seconds, which isn’t the longest wait at home, or in the studio or rehearsal room, but it could make accidentally pulling out the MX5’s external plug‑in power supply an agonisingly long and embarrassing experience on stage! It takes only six seconds to power down.

Like the Gigboard and the Pedalboard, the new MX5 features 46 amplifier models, 15 cabinet models (each with 10 microphone emulations), 300 impulse responses, and 63 modelled effects. Also like its stablemates, the MX5 can store a virtually unlimited number of third‑party IRs alongside those from the factory. Using the built‑in USB Transfer Function, which makes the unit appear as an external drive to Windows or Mac computers, the onboard IRs can be copied, dragged and dropped to and from the computer and the MX5’s onboard Impulse Responses folder.

Models can be freely combined to form a Rig (HeadRush’s term for a preset), a process that is based around the touchscreen, with or without the use of the encoder knob. Each rig has 11 slots, and these can be arranged as a single 11‑slot chain, a chain of three that then splits into two parallel three‑slot chains, each feeding a two‑channel stereo mixer, whose output feeds the final two slots, or two parallel four‑slot chains, which are mixed together to feed a final three‑slot chain. Saved rigs are stored in the MX5’s Rigs folder. Once you’ve built your rigs, you can group these into Setlists, which are also stored in their own eponymous folder. Naturally, the Setlist feature is useful in live situations, but it also gives you an extremely convenient way of organising rigs. As with IRs, Rigs and Setlists can be managed on a USB‑connected computer.

The MX5 contains one other folder, enigmatically named Blocks, which has 71 sub folders containing the data (in .block format) that the MX5 requires to generate the Input, Output, Mix, Amplifier, Cabinet and individual Effect models and their factory and user presets. Again, these can be managed using the USB transfer function.

When it comes to moving between and around your rigs, the MX5 has inherited the larger Pedalboard’s single‑press footswitch modes, Stomp, Rig and Hybrid, along with their longer‑press variants, Hands‑Free, Setlist and Touchscreen Lock/Unlock. The Stomp mode allows you to assign any three models in a rig to one of the three footswitches and to load the next or previous rig, whilst the Rig mode allows you to select any rig from a bank of three, and to move through your rigs, forward and back, in groups of three. In Hybrid mode, the second and third footswitches select the previous/next rigs, with the first footswitch assigned either to switch one pedal on/off or to select the current rig’s first Scene, if scenes have been programmed.

The longer‑press functions are pretty self‑explanatory. Hands‑Free mode allows you to use the expression pedal to change any parameter of any of the models in a rig, beginning with the last‑selected model. The first footswitch selects the next/previous model, and the second selects the next/previous parameter, while pressing the third footswitch exits Hands‑Free mode. In Setlist mode, you can select a setlist and move forwards or backwards through its list of rigs. 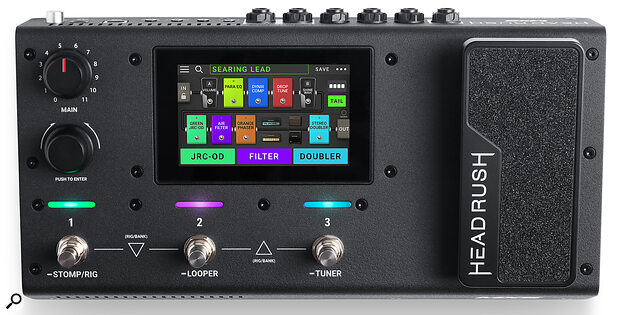 As with other Headrush products, the footswitches have more than one function, depending on the mode. For example, you can use them and the expression pedal for hands‑free operation on stage.